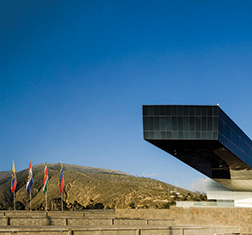 For the Common Good

Share on:
UNASUR is an international political organization that was created as a mechanism to facilitate dialogue in public regional policies, to boost and respect democracy and human rights in South America. […]

UNASUR is an international political organization that was created as a mechanism to facilitate dialogue in public regional policies, to boost and respect democracy and human rights in South America. Its foundation is boosting competitiveness, thus transforming the current extractive model in the region to optimize natural resources, giving them added value. It also seeks to boost the progress and development of science and technology and develop the necessary infrastructure projects for integration and connectivity consolidation. Social inclusion is the organization’s main challenge, as it involves balancing income redistribution, decreasing gaps between the rural areas and cities, as well as incorporating the concept of gender and equality to eliminate regional inequalities.

UNASUR was formed on May 23rd, 2008, between the Andean Community and the Mercosur, when the UNASUR Constitutive Treaty was signed. It comprised of the twelve South American countries: Argentina, Bolivia, Brazil, Colombia, Chile, Ecuador, Guyana, Paraguay, Peru, Suriname, Uruguay, and Venezuela. Each member state has civil servants within the Secretary General of the organization—the technical organ that executes the mandates from the Council of Head of State and Government, and other authorities of UNASUR. The twelve councils of the organization work in different areas in order to achieve social inclusion, eliminate socio-economic inequality, strengthen democracy, increase citizen’s participation, and reduce existing asymmetries. UNASUR’s presidency is held every year by one of the member states in a pro basis. The first country to hold the Presidency Pro Tempore was Chile, with President Michelle Bachellet. Currently it is Tabaré Vazquez, President of Uruguay.

On April 17th, 2014, UNASUR’s Defense Council created the South American School of Defense in order to define a new regional security policy through military academies. The school will train civilians and military from the region in national and regional security. In its beginning stages, the school will be focused on cyber defense by request of all member states, although it will also confront common threats like weapons trafficking, human trafficking, money laundering, and natural disasters. The curriculum intends to preserve South America as an oasis of peace in the middle of a world suffering from war, conflict, and instability. Another important project in which UNASUR has focused its efforts has been the creation of a South American nationality for its 400 million South Americans to have free mobility to work, study, or travel while recognizing their double nationality. “We have a language identity, a historic identity, common roots, a close geography … We started [UNASUR] from our regional identity, we do not have the ethnic or religious differences that you might find Europe,“ said UNASUR Secretary General and former Colombian President Ernesto Samper. One of the organization’s strategic plans to boost a South American identity is the broadcasting of a series of documentaries about the different cultures of the region in the state-owned TV channels of all member states. Other initiatives involve the eradication child obesity, reducing the price of medicaments, infrastructure connectivity projects, and the construction of a regional fiber optic network.

The new headquarters opened in December 2014 in the city of Quito, right next to the monument of Mitad del Mundo, and has marked a turningpoint in UNASUR’s attempt to boost the organization’s power. The building, which is 25,000sqm and had a cost of $44 million, is situated in an emblematic place in the world, the equator where the northern and southern hemispheres meet. “We want the new headquarters to become the South American integration capital,“ stated Samper.