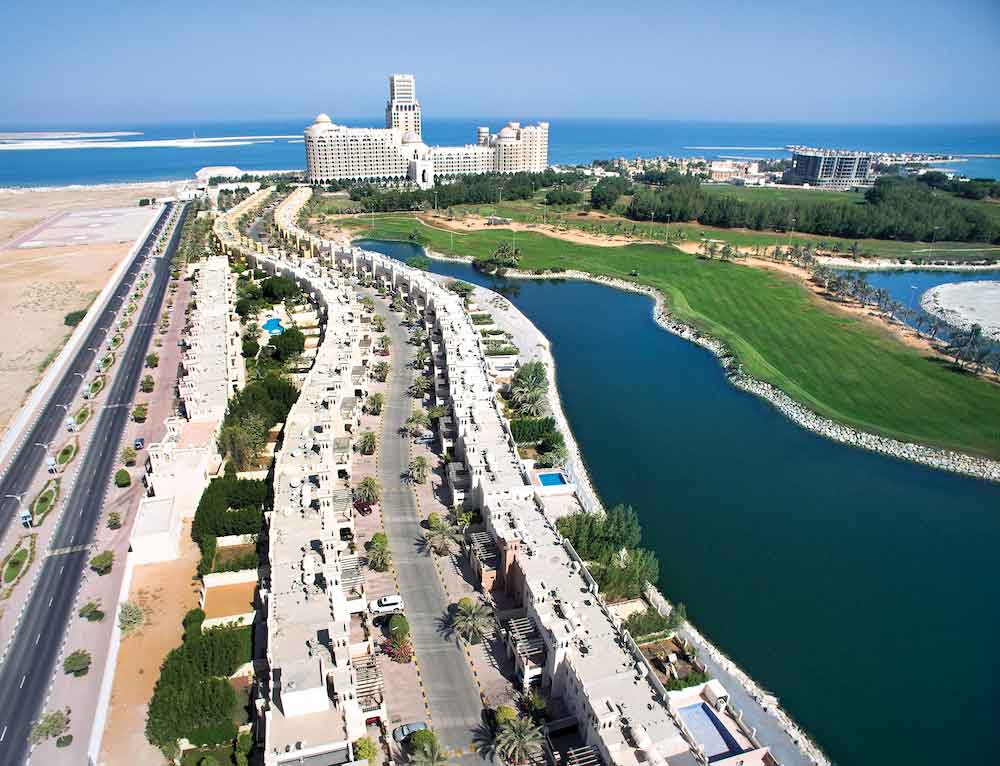 Share on:
The Emirate of Ras Al Khaimah has been busy building its future, to the backdrop of development in the wider UAE, and the USD4.3 trillion estimated to be spent in the MENA region on construction by 2020, according to RAK Investment Authority (RAKIA).

Official data suggests that the UAE’s construction industry will contribute 11.5% of GDP by 2021. RAK’s construction scenario, on one hand, is a familiar one. The sector, along with real estate, has seen a wealth of commercial development at the burgeoning industrial free zones and the road and related infrastructure demanded by logistics and trade. The RAK Free Trade Zone business, for one, offers competitive setup costs such as Flexi Desk starting at AED15,000 per month, Flexi Office starting from AED 23,000, Standard Office starting from AED24,040, Special Executive Office starting from AED30,650, and warehousing starting from AED52,850. Meanwhile, the zone also offers companies the option to house staff on site, starting from AED1,200 per month. In turn, the expatriates who arrive, the local manpower, and rising urbanization create demand for schools, healthcare facilities, and leisure. Added to this is a rising population and moreover, significant growth of tourism, including health tourism, all of which demands rooms and beds. Then there has been a social housing program to ensure that no nationals are without accommodation. Such schemes as the Sheikh Zayed Housing Programme in Ras Al Khaimah extends financial assistance for home buying, renovating, or extending existing properties. Of note, however, is the fact that given the earlier successes of neighboring Emirates, RAK has flourished on its uniqueness, and on being a relative latecomer to the table. This commercial approach, pragmatic regardless of sector, is perfectly captured by Abdullah Al Abdooli, Managing Director of Ras Al Khaimah’s landmark Al Marjan Island, who told TBY that “We do not promote ourselves to an investor as a short-term cash flow generator; we promote ourselves as a long-term value creator.”

Back in 2009 RAKIA launched the Emirate’s real estate regulator, the RAKIA Real Estate Regulatory Agency (RERA). It ensures that all implementation conforms to regulatory standards. Part of its job, too, was the implementation of escrow account law for freehold projects. Accordingly, property developers may only register with RAKIA RERA upon receipt of approval for a project’s concept design. Thereafter, an escrow account may be opened to commence property sales.

More recently, in October 2016, a smart building index was launched nationwide to establish tight benchmarks for building designs. It also promotes the increased use of leading-edge construction methods to expedite the construction process, including local component assembly. Once the system is up and running in 2017, increased construction productivity will benefit the nation, not least RAK.

The stellar growth of the Dubai property market has had a tangible impact on RAK. Rents in Dubai saw huge rises in 2014, which in turn drew the attention of expatriates and nationals alike to RAK’s more affordable offerings a short drive down the E311 highway. RAK has also become perceived as offering a more leisurely lifestyle than the larger Emirates. Industry data for 2014 indicated that a studio flat with a sea view could be rented for an average of AED20,000 per year, in stark contrast to AED90,000 for a comparable studio in Dubai’s Jumeirah Beach Residence. That being said, in 2013 rents in RAK had on average already seen a 39% YoY appreciation. Certainly, too, Dubai’s Expo 2020 plays a role, as an estimated 70% of visitors will be from abroad, requiring local accommodation, while some also extend their visit to neighboring Emirates. Benoy Kurien, General Manager of Al Hamra Real Estate Development observed that, “In Ras Al Khaimah we do not go through the big peaks and troughs that some primary markets here do [and] this year we have seen rental values increase between 5 and 8%, which is low [as] usually it falls around 15% or so.”

Al Abdooli, explained how the company is invested in “the full master plan of Ras Al Khaimah, and not just on Al Marjan Island as a development, [whereby it is] selling a business opportunity in the Emirate.” Nonetheless, Marjan Island, a man-made archipelago, is a stunning achievement that, extending 4.5km into the waters of the Arabian Gulf, is more than RAK’s version of Dubai’s Palm Jumeira. Organically designed to resemble coral, each plot is home to a unique sea view. The target for Marjan Island is 8,000 keys in total, while at the time of interview there were roughly 1,500 operational hotel rooms among three hotels, namely Hilton DoubleTree, Rixos Bab Al Nahr, and Al Marjan Island Resort and Spa. Securing such prestigious names early on is indicative of the hospitality industry and property market expectations for this epic scheme. In fact, the Hilton DoubleTree recently expanded its property with an additional 240 hotel keys to 700, “meaning a 44% increase within just one year after its opening in January 2014.” In short, “international brands believe that they have to be early birds in the Al Marjan development.” Meanwhile, Colliers International estimates a return on investment period of five years. A key development on the archipelago is Pacific, a GBP200 million project developed by Select Group comprising 1,440 beach-front apartments perched on the tip of Al Marjan Island. The gated community features a private beach and health club. The properties were made available for a 10% deposit with 40% payment on completion and 50% over 12 months, paid quarterly. As of March 2016, 80% of properties had been sold.

The Al Hamra group commenced business to develop Ras Al Khaimah’s residential and hospitality markets. Its flagship project, Al Hamra village, stretching over 77 million sqft on the shore of the Arabian Gulf, is already a living community boasting a championship golf course, state-of-the-art marina, several hotels, a shopping mall, over 1,100 villas, and close to 2,500 apartments delivered. General Manager of the real estate arm, Al Hamra Real Estate Development, Benoy Kurien revealed that “currently more than 91% of our land bank in Al Hamra Village is fully developed.” The latest project phase is Bayti, “a selection of town homes with three or four bedrooms plus a limited selection of large, six-bedroom villas.” Furthermore, demand from expatriates for freehold properties has been met. He also highlighted the firm’s “strong hotel portfolio and (…), two flagship shopping malls in the Emirate, Manar Mall and Al Hamra Mall.” The former is positioned as the premium mall in the Northern Emirates and being doubled in size to keep the cash registers ringing. Meanwhile, “the Waldorf Astoria Ras Al Khaimah, Hilton Al Hamra, and Ritz Carlton are all a part of Al Hamra’s portfolio.”
Krishna Kumar, Deputy General Manager of Al Hamra Construction Co., explained how the company is partnering in project development through sister group is Al Hamra Real Estate. And with a presence in Al Hamra Village, he added that “we are developing Falcon Island, a platinum-rated environmental protection scheme where we are focused on the specifications of sustainability with special buildings and materials.”

Managing Director & CEO of RAK Properties Mohammed Sultan Al Qadi claims that despite the 2008 credit crunch, demand for the company’s high-end projects, including hotels, malls, and gated communities has prevailed, as those had been in short supply until relatively recently. Eco-themed, mixed-use projects such as Mina Al Arab filled the gap, leveraging the Emirate’s natural diversity of sea, desert, and mountain, and proximity to Dubai. The Mina Al Arab project features 310ha of open spaces, ecological preserves, and landscaping. Among its tourism facilities are eight themed resort hotels, three eco-hotels, and a marina, while the residential component comprises 6,000 apartments and 800 villas and townhouses.

RAK’s high-quality limestone deposits enable local quarries to fuel the construction boom, as well as the steel and cement industries of the wider UAE. Local stone is quarried in the mountains, yielding diverse building materials. Moreover, RAK is the only Emirate that produces oil-well cement, white cement, and lime, having become both a major domestic supplier and exporter, the latter facilitated by a high quality port network. According to Global Cement, as of 2014 the UAE had 12 integrated cement plants, eight cement grinding plants, and 17 cement-producing companies. The integrated cement plants have production capacities of 29 million tons (Mt) per year of cement, and the cement grinding plants have 10.44Mt per year of capacity, making a total of 39.84Mt per year. Notably, 45.9% of the UAE’s integrated cement production capacity, at 13.3Mt per year, is installed in Ras Al Khaimah. Since the global economic crisis, overcapacity in the UAE’s cement industry has prompted it to become a net exporter of cement.

Al Nuaimi Group commenced operations in 1974 as a transport company. Yet today it produces concrete blocks and interlock pavement in bulk, as well as curbstones. It recently extended its reach by acquiring Al Harfyoon wooden products. CEO Dr. Rashed A. Al Nuaimi stated that “road works is the strongest division, but construction, ready mix, and piling extend a huge financial strength to the group.” The group has focused on public and private sector schemes, such as “the Flamingo Extension 68 Villa project of RAK Properties, as well as a Police Complex in Digdaga, where we recently casted the raft foundation of 2,000 cubic meters of concrete.” Another construction giant is RAK Ceramics, which operates nine plants in the RAK, as well as others in Bangladesh, Slovakia, and China. Ranking among the world’s top-three ceramic manufacturers, it exports to around 135 countries. Locally, it has a daily capacity of 200,000sqm of ceramic tiles.
Overall, Ras Al Khaimah is on the rise, and construction, made cheaper by local resources, is leading the march.