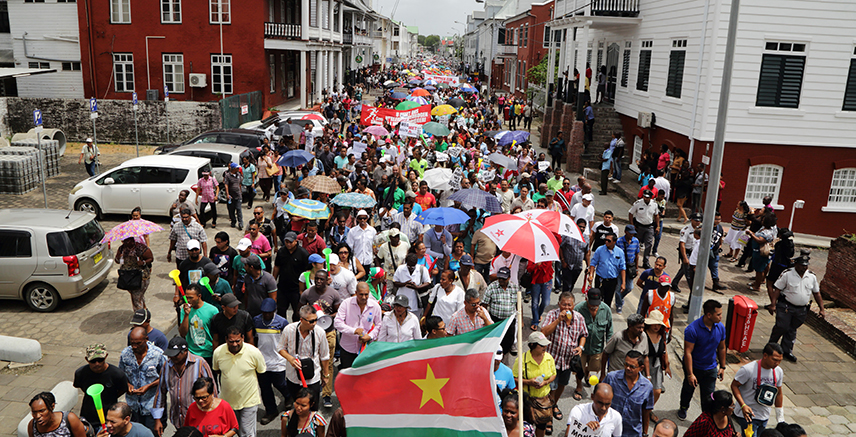 How do the region’s economies compare?

Share on:
The small states of the Caribbean are often overlooked because of their limited international political clout, with the media only focusing on them when offshore banking scandals emerge.

Demonstrators shout slogans during a protest against the administration of President Desi Bouterse in Paramaribo, Suriname, over an announced loan agreement with the IMF in 2016

But in addition to breathtaking beaches and relaxed fiscal regulations, there are other aspects of these economies that investors should take into consideration.

Here, we highlight five economic facts about nations in and around the Caribbean, according to a World Bank regional definition that includes Antigua and Barbuda, the Bahamas, Barbados, Belize, Dominica, Grenada, Guyana, Jamaica, St. Kitts and Nevis, St. Lucia, St. Vincent and the Grenadines, Suriname, and Trinidad and Tobago.

Jamaica receives the most tourists by a long way

Jamaica is by far the largest recipient of foreign visitors out of these 13 Caribbean nations, representing a full 33% of total international arrivals to the region.

Once home to renowned songwriter Bob Marley, Jamaica has a great geographical location between the US and South America, and has become a promising tourism destination for these reasons.

Tour operators have attempted to boost air connectivity both north and south, and despite having a high population with relatively high crime rates, the sector has been doing well.

The Bahamas follows closely behind with more than 1.5 million arrivals registered in 2016. Together, the two nations represent well over half of total, with the remainder spread among the other 11 countries.

Other difficulties remain in attracting more arrivals, however. Tourism to these Caribbean states has grown by just 13% between 2005 and 2015, largely due to increasing competition in the region.

In the same period, arrivals to Mexico and Cuba increased by over 30% each.

Trinidad and Tobago has experienced the biggest growth in FDI

Foreign investor interest in Trinidad and Tobago has surged since 2012.

Back then, the country was in the red with a net outflow of investment of roughly USD1.8 billion.

More foreign investors withdrew money instead of purchasing assets in its economy, but within three years the country had managed to turn its fortunes around to become the second largest recipient of FDI out of the 13 nations, just behind Jamaica.

With net inflows of USD406 million in 2015, this marked remarkably rapid growth for such a short period.

Suriname has the fastest-growing GDP

The economy of this country of just half a million inhabitants has grown four-fold over those ten years, the fastest among these thirteen nations.

Now Suriname has the third-largest GDP of the group, overtaking that of Barbados in 2012.

A major reason for this outstanding economic growth was rising international demand for gold and aluminum oxide, products that together make up around 50% of the country’s exports, over recent years.

However, though GDP per capita has grown three times during this period, widening equality has become a pressing political issue.

The Bahamas has the largest GDP per capita

Being the closest of all these states to the US, the Bahamas has developed very efficient tourism and offshore banking industries.

Nassau, its capital, is located just 300km from Miami, making the Bahamas one of the preferred destinations for US citizens seeking a sunny destination for vacation or planning to open an offshore account.

Exports of goods and services represent 56% of Belize’s GDP, making it more reliant on foreign sales than the other economies in this list.

Bordering Mexico and Guatemala, Belize exported USD425 million of goods and services in 2015.

According to MIT data, the country stands at just 164th position in its ranking of largest exporters in the world.

However, sales of products abroad form a fundamental component of its economy.

Almost 60% of its exports comprise agricultural and raw material products such as bananas, sugar, crustaceans, and rolled tobacco.