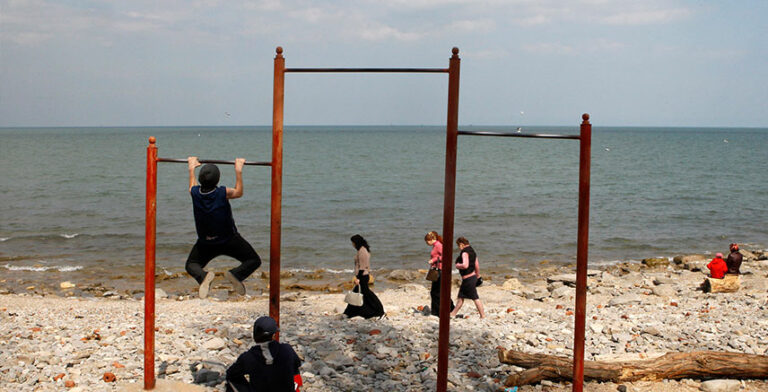 People visit a beach along the Caspian sea in Dagestan's capital Makhachkala in March, 2012

If the Caspian Five—Russia, Iran, Kazakhstan, Azerbaijan, and Turkmenistan—cannot agree on whether the Caspian is a sea or a lake, how can they agree on anything else?

The Caspian Sea is currently the shared domain of five regional players each vying for as large a piece of this pie as possible: Russia, Iran, Kazakhstan, Azerbaijan, and Turkmenistan.

Located atop the Caspian depression (some 28m below sea level), it is the largest inland sea in the world, and separates the politically unsettled Caucasus region and its mountainous frontiers to the west from the vast Central Asian steppe to the east.

In Russian, Kazakh, and various western languages, the sea is named after the ancient tribe of Caspi, first mentioned by Herodotus in the 5th century BCE. To Azerbaijanis, Turkmen, and Iranians, it’s called the Khazar Sea after the Turkic Khazar Empire that ruled the Caucasus and lower Don Bass from the 7th-10th centuries.

The sea straddles three ethno-civilizational axes: Persian, Slavic, and Turkic; two world-religious ones, Christianity and Islam; and two divergent interpretations of the latter: Sunnism in Kazakhstan, Turkmenistan, and the Dagestani shores of the Russian Federation; and Shiism in Iran and Azerbaijan.

Apart from a brief period of Russo-Soviet hegemony in the 19th and 20th centuries, the Caspian Sea remains as far from the grasp of administrative centralization today as it was in the eighth century.

A History of Violence

Though a mecca of oil production since the early 19th century, recent discoveries of large natural gas deposits have made the Caspian’s ambiguous post-Soviet legal status all the more acute.

While there is nothing like the savage competition seen in the 20th century, during which control of Baku alone changed hands between Tsarists, Ottomans, Bolsheviks, Mensheviks, Dashnaks, and British, the current absence of war mustn’t be confused with peace.

Until the spoils of one of the world’s largest potential energy assets are ‘equitably’ divided among five commodity-dependent countries, the likelihood of conflict remains.

With one-third the saline levels of the ocean and a surface area the size of Japan (374,000sqkm), the Caspian coast’s earliest inhabitants can be forgiven for thinking their endless blue expanse an ocean.

This makes it all the more ironic that its contemporary inhabitants cannot decide if it is a sea or a lake.

If a sea, the spoils of its seabed must be divided according to each country’s coastline. Under the 1982 UN Convention on the Law of the Sea, this gives each state an exclusive economic zone of 200 nautical miles from its shore, effectively ‘nationalizing’ the spoils of the entire Caspian. Fittingly, those with the longest coastline stand to gain the most.

The catch? The UN’s Law of the Sea does not necessarily apply to “inland” ones.

If a lake, on the other hand, the greater seabed must be equitably divided, with everything beyond 15 nautical miles of the coast belonging to the ‘commons.’ Under this definition, even the construction of a trans-Caspian pipeline would need the approval of each state, an unlikely event so long as Russia continues to butt heads with those thirstiest for Turkmenistan’s hydrocarbons.

Who supports which appellation is not difficult to divine: Iran, the state with the smallest coastline, adamantly calls the Caspian a lake. For newly independent Kazakhstan, Azerbaijan, and Turkmenistan, who enjoy the longest coastlines, never was there a finer sea.

Were the latter the case, Kazakhstan’s ample coastline would give it 29.9% of the Caspian’s waters, followed by Azerbaijan with 20.7% and Turkmenistan with 19.2%. Aspiring world-players Russia and Iran would receive just 15.6% and 14.6%.

For various reasons, Russia remains internally divided as to how they should define the Caspian.

According to its Ministry of Foreign Affairs, it is a lake—a homey appellation that allows its navy to continue its military dominance over the world’s largest inland body of water.

In October 2015, it launched 26 sea-based cruise missiles against ISIS targets in Syria from its flagship Tatarstan and Dagestan frigates; all this barely a month after Moscow officially entered the fray on behalf of Bashar al-Assad.

As Pravda described it, the Caspian Flotilla’s “zone of destruction” covers all of Central Asia and the Middle East.

Yet ask Russia’s Ministry of Energy or major oil and gas producers, and the Caspian is clearly a sea.

After all, Russian firms are better placed to land the biggest contracts once deeper-water exploration projects get underway—be they off the shores of Astrakhan (Russia), Aktau (Kazakhstan) or Anzali (Iran). Betting on peace to bring home the bacon, they are happy to leave their cleavers at port.

This is known as Russia’s “common waters, divided bottom” policy. Like many masterplans emanating from Moscow, it has so far sputtered along, neither sating nor breaking too many post-Soviet hearts.

But at some point a line in the seabed must be drawn.

The Privations of Peace

Three of the Caspian’s five states have been on a near-permanent psychological war footing since the 1980s (Iran, Azerbaijan) or 1990s (Russia), while a fourth relies on often rash expressions of nationalism to bolster its insular regime (Turkmenistan).

All five rely heavily on carbon extraction to clothe, feed, and house their people.

With three of world’s four largest natural gas reserves in the world, Russia, Iran, Turkmenistan—much of which lies undiscovered and underwater—the Caspian Five cannot afford to cold-shoulder the issue of maritime rights forever.

Three developments make this absolutely necessary: first, offshore discoveries of oil and natural gas fields are fast increasing in the Caspian. Second, Europe’s appetite for the latter is booming. Lastly, so too is China’s.

Between 2000-2012 alone, oil production in the Caspian increased by nearly 250%, from 1.1 to 2.55 million barrels/day. During that same period, natural gas production went from 34 billion cubic meters/year to 79 billion.

Altogether, the Caspian is thought to possess 48 billion barrels of oil—compared to Russia’s total reserves of 80 billion—and 8.7 trillion cubic meters of natural gas.

These figures would make it the ninth largest oil producer in the world (behind Libya) and the tenth largest in natural gas (behind Algeria).

It is no news that increasing tensions between Moscow and the West have played the biggest role in motivating Europe to seek alternative sources of energy.

Since the easiest way to do so is by piping Turkmen, Azerbaijani, and Kazakhstani natural gas from the Caspian across the Caucasus, Anatolia, and southern Balkans into Western Europe—thus bypassing Belarus and Ukraine—in 2008 the European Commission launched the USD45 billion Southern Gas Corridor to do just that.

Coming on the tails of the Russo-Georgian War in 2008, during which all shipments of Caspian carbon to Europe were cut off, the Corridor was a larger extension of US efforts in the 1990s to build a Trans-Caspian Gas Pipeline to eventually do the same.

If constructed, the Trans-Caspian was to run from the Turkmen port of Turkmenbashi to Baku and include a northern connection to Kazakhstan’s Tengiz oilfield, the sixth largest in the world.

Though both the Trans-Caspian and the Southern Corridor have met with resistance from Russia and Iran, there is little outside war that Moscow or Tehran can do to prevent this grand detour from happening. After all, in addition to every Caspian exporter, Turkey, Georgia, Greece, Bulgaria, and Albania all stand to gain a lot.

For a while there, progress was swift.

2006 saw the opening of the South Caucasus Pipeline from the Shah Deniz oilfield in Azerbaijan across Georgia and Eastern Anatolia to the Turkish Mediterranean, whence it was shipped to Europe by boat.

To cut out the Mediterranean middleman, in 2015 the Trans-Anatolian Pipeline (TANAP) was launched. Instead of heading south to the Turkish port of Ceyhan near the Syrian border, TANAP will ferry the stuff across the Turkish landmass into Bulgaria and Greece via the Hellespont. It is slated for completion by 2018.

Once in the Balkans, Caspian crude will find its way to European households via the Trans-Adriatic Pipeline (TAP), another ambitious project that broke ground in 2016 and will traverse Greece and Albania en route to Italy and Western Europe.

Critically, this will involve a 180km reverse-flow pipeline between Greece and Bulgaria, the Interconnector Greece-Bulgaria (ICGB), to supply the Western Balkans and Central Europe as well.

Once completed, the Trans-Anatolian, Trans-Adriatic, and Interconnector Greece-Bulgaria (ICGB) will vastly reduce European dependency upon Russia. If the Trans-Caspian were ever to get off the ground, it would be a strong nail in the thin birch coffin of Russian leverage.

Meanwhile, China’s seduction of Central Asia is also upping the dowry of less duteous brides by the day.

As part of its effort to build a new Silk Road, Beijing has already set about creating a vast network of pipelines across Central Asia, notably to import Turkmen natural gas into western China.

Though there have been major recent setbacks to the famed “Line D” proposal, a critical pipeline slated to carry 30 billion cubic meters of Turkmen gas to China each year, securing Central Asian energy remains a key component of China’s Silk Road initiative.

As a result, though traditionally shunned by Europe for human rights abuses and excessive single-party proclivities, the Turkmenistans of the world will find the price of their remission in Europe inversely proportionate to East Asian energy appetites.

Indeed, the quicker the success of China’s Silk Road initiative, the faster the resolution of Caspian ‘property rights’ must come.

Buried beneath the rubric of these traditional, competing rivalries is a quicksand of unsavory and ever-shifting alliances.

On the one hand, the war in Ukraine (2014-present) has vastly increased the importance of the Caspian, as the European race to find alternative sources of energy to Russia is given a greater urgency than any east-west crisis since Prague ’68.

On the other, shifting fortunes in the Syrian catastrophe (2011-present) have turned many longstanding assumptions about the Caspian on their head.

First, and most obviously, the international campaign to salvage Bashar has driven Russia and Iran closer together than they have been in decades, if not centuries.

In addition, Ankara is now quasi-aligned with Moscow and greatly miffed at the US for its backing of the Kurds in Syria, defanging, if not neutralizing, the eastern-most flank of NATO.

Meanwhile, as relations reach a tripping point between Turkey and Western Europe, and Ankara warms to Moscow, the odds of the EU’s grand Southern Gas Corridor being completed in a timely fashion whither by the day.

Peace in the World

Despite the greater region’s kaleidoscope of contradictory coalitions—whether it be one’s position on Nagorno-Karabakh or Kurdistan—the Caspian’s littoral states still seem relatively buoyant about their ability to strike an eventual deal.

Also hosting the ongoing Russo-Turkish-Iranian peace talks to end the Syrian war and the 2017 World’s Fair, the timing is certainly propitious. As the only Caspian state with no dogs in a single regional fight, Astana is the best placed to navigate these hot, if hibernal, waters.

Will 2017 mark the moment Kazakhstan seizes the Triple Crown from history: peace in Syria, the World’s Fair, and a successful Caspian Summit? Perhaps not. But eke out a solution to the latter and they just might obviate the need for a different sort of peace talk in the future. 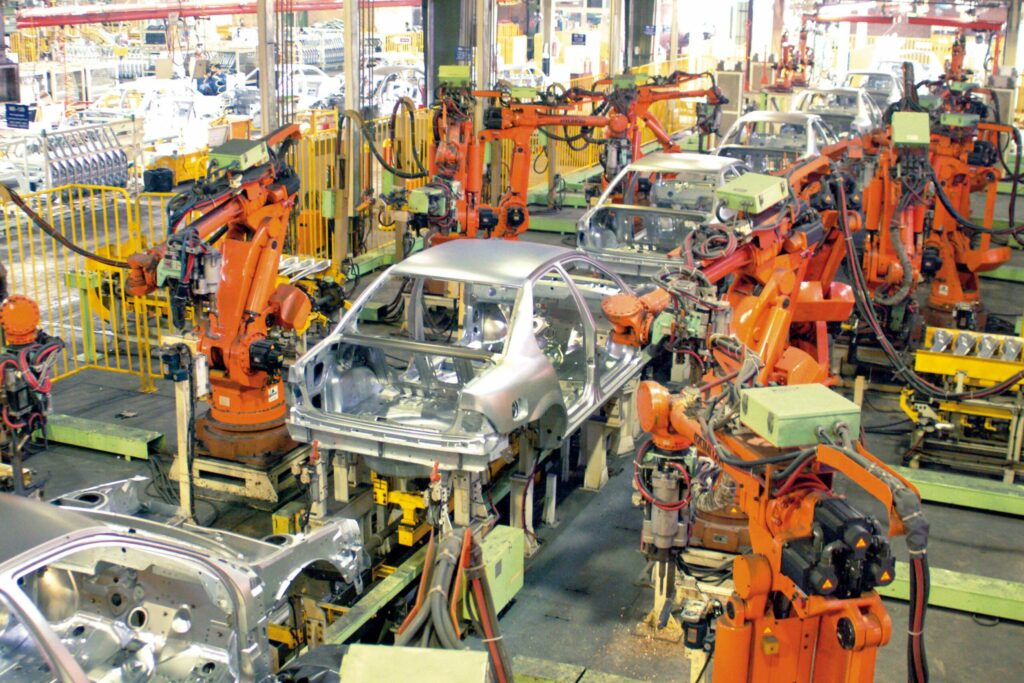