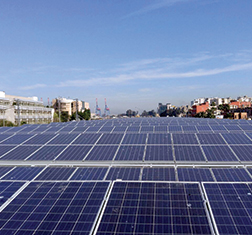 Share on:
The government is facing an uphill struggle to set into motion the energy program sought both by business and a growing population. Regional noise, meanwhile, is also impacting efforts to exploit potential resources.

The once pumping Trans-Arabian Pipeline that Lebanon was a participant in ran dry back in 1976, victim to regional conflict, which in one form or another, continues to plague the region today. Electricity supply has since then remained an interrupted quantity, curbing commercial activity, and, ironically, the investment needed to reverse the situation.

Yet now 40 years later, Lebanon is working on the second phase of its National Energy Efficiency Action Plan (NEEAP 2016-2020). NEEAP 2011-2015 was adopted by the Council of Ministers on November 25, 2011. The objective of its 14 principles was to foster sustainability awareness among the public and industry, engender capacity building, and legislate a framework for sustainable generation with a maximum renewables content and energy conservation as determined by Lebanon’s building code. In short, the plan seeks to avoid past inefficiencies in building a national energy matrix fit for a growing population that in 2016 reached 5.9 million, virtually doubling from the 3.2 million of 2000. The second stage, NEEAP 2016-2020, will continue to reduce the use of non-environmental building products, most notably in public lighting. The total estimated cost of improving energy infrastructure is officially put at around USD6 billion. Lebanon was the first Arab country to adopt such a program. In January 2015, Norway and Lebanon also signed a three-year cooperation agreement regarding the development of Lebanon’s oil and gas sector. Norway’s role was to provide technical support to the Lebanese Petroleum Administration (LBA) and the relevant ministries and organizations.

Electricité du Liban (EDL) is Lebanon’s state-owned generator, transmitter, and distributor of electrical energy. Catering to 1.5 million official customers it has adopted a tariff-freezing policy since 1994 whereby as of 2016 the average tariff for domestic consumption is 9.58 US cents/kWh, while SMEs pay a flat rate of 7.63 US cents/kWh. Insufficient supply has led to the rise of auto-generators that also sell electricity off-grid, which has inflated the nation’s oil bill over the years. Moreover, unsustainable government subsidies to EDL in the form of direct payments had risen to USD2.03 billion by 2013 (4.6% of GDP) from just USD62 million in 1998, making for a whopping annual compounded growth rate of 26.17%. The energy sector of tomorrow will need to reconsider this reality, the pace of which, however, will be determined by the political climate. And meanwhile, the cost to the state will be determined by oil price fluctuations.

Sector data indicates that per-capita electricity consumption has climbed at an average annual rate of 7%, which has clearly not been met by adequate generation. Indeed, as of August 2016, generation capacity from Lebanon’s power grid, where the last facility construction dates back to 1996, was at 1,800 MW in stark contrast to demand of 3,000 MW, hence the lengthy power cuts familiar to many citizens. Lebanon’s electricity generation derives from thermal and hydraulic input and international imports, traditionally from Syria and Egypt. Needless to say, these have been interrupted by the realities of war. Yet, had that not even been the case, installed capacity in itself is dated and insufficient to cope with wider electrification. It has fallen to industry players to encourage a wholesale rethink, which in 2010 took form in an electricity reform plan for the short, medium, and long term, then geared at total installed capacity of 4,000 MW by 2014 and 5,000 MW beyond 2015. This involves an installed capacity increase of 2,500 MW through the independent power producer (IPP) model, significantly by rallying private sector involvement in both exploration and generation. The government envisages around USD1 billion of commitment and looks to a private sector contribution of around USD2.7 billion.

The government program entailed the initial use of floating power barges plugged to the grid to take up the slack, while plans to import from Turkey were stymied again by regional conflict. The first barge generating 187.5 MW delivered emergency power to Mount Lebanon, followed by a second with an estimated capacity of 83.5 MW in Jieh. Both vessels, operating on heavy fuel, meet around 20% of Lebanon’s electricity demand. The project came with an average cost of 4.8 US cents/kWh, excluding fuel.

Bankmed’s report Oil and Gas in Lebanon 2014 highlighted interest in Lebanon’s potential reserves in light of deepwater discoveries in neighboring countries that share a common geological offshore basin, the Levantine basin within the Eastern Mediterranean; this has prompted Lebanon’s 2-D and 3-D seismic surveys and the promulgation of a new petroleum policy in August 2010. The region includes the territorial waters of Lebanon, Israel, Syria, and Cyprus.

A 2010 US Geological Survey (USGS) had estimated untapped oil and gas resources of the basin at roughly 1.7 billion barrels of recoverable oil and 122 trillion cubic feet (tcf) of recoverable gas, marking the largest gas discoveries of the decade. In October 2013 the Ministry of Energy and Water estimated natural gas of 96 tcf, which at that year’s prices of roughly USD5 per thousand cubic feet, equated to an estimated value of between USD125-480 billion. Lebanon’s primary objective may be to efficiently meet its own demand; yet the potential value of its proximity to Turkey, Israel, and Europe is not lost on energy developers. In April 2013, 46 transnational energy players, including Total, Shell, Chevron, and ExxonMobil, qualified to enter the first licensing round for exploration of Lebanon’s potential offshore resource. Yet regional conflict and domestic political uncertainty together have put the process on ice. Back in 2015 the IMF estimated that drilling would not likely commence before 2020.

Chairman of the Board of the Lebanese Petroleum Administration, Wissam Zahabi, is bullish, telling TBY that, “The energy sector is the greatest sector for investment in Lebanon right now.” Moreover, this goes beyond oil and gas alone, including, “… an entire energy chain in need of processing facilities, reservoirs, pipelines, power plants, renewable energy projects, distribution networks, and transmission.” On the matter of underinvestment over the previous 15 years, he went onto cite, “a coastline pipeline running from the north to the south of the country, representing a line of 132km and 32 inches in diameter (still) pending for 10 years” due to poor investment flow.

To instill private-sector confidence the government has backed a comprehensive program of awareness building. Events such as the 5th International Trade Exhibition for Power, Electrical Engineering, Alternative Energy, Lighting, HVAC, Water, and Environmental Technologies in Beirut in June 2015 fully showcased Lebanon’s energy proposition to international experts and industry players. And in May 2016 the Third Forum on Oil and Gas outlined the current status of Lebanon’s energy matrix.

In 2010 national energy consumption was at 9.79 billion kWh, yet this had climbed to 14.19 billion kWh by 2014, presaging the need for sustainable solutions and alternative sources. HE Arthur Nazarian, Lebanon’s Minister of Energy and Water Resources, explained the National Energy Efficiency and Renewable Energy Action (NEEREA) program, a central bank-initiated financing mechanism aimed squarely at green energy projects. Launched on November 25, 2010 in collaboration with the EU, it defines the parameters of subsidized loans pertaining to energy efficiency, renewable energy and certified green buildings. NEEREA loans to residential, commercial, non-profit, and industrial consumers have a ceiling of USD20 million bearing an interest rate of 0.6% for a maximum of 14 years, including a grace period of six months to four years. Supplementary to this are the technical support and capacity building activities are being undertaken by the Lebanese Center for Energy Conservation (LCEC) to create a leading-edge sector of specialists under the umbrella of Lebanon’s Technical Support Consultancy Services Agreement in Energy Efficiency and Renewable Energy. “The solar photovoltaic market has doubled between 2014 and 2015, and the current installations in 2016 indicate that growth will be more than double between 2015 and 2016. Simply, NEEREA has inserted a sustainable energy culture into the Lebanese private sector, and we are proud of that,” the minister stressed. Lebanon’s energy mix rethink has the potential to spawn a local green sector supplying the technology and facilities required for the nation to meet its 2020 green energy target of 12% of total energy generation. This amounts to 833 ktoe, and as Nazarian put it, “wind and solar energy for electricity production would represent a major milestone with a projected share of 3.96% of the targeted 12%. Solar water heaters and biomass are another important milestone, at around 4.8%,” with hydro resources contributing around 3.24%.
A study commissioned by the United Nations Development Programme (UNDP) Country Energy Efficiency and Renewable Energy Demonstration Project for the Recovery of Lebanon (CEDRO), and launched with the collaboration of the Ministry of Energy and Water, pinpointed two areas of potential geothermal development, namely a 1.5-km deep reservoir at 130 C near Akkar and a slightly cooler and deeper source in the Bekaa Valley capable of generating a combined 30 GW per hour by 2025. While at a modest cost of around USD20 million, these would only meet 0.2% of total national energy demand.

In step with green policy on the solar front is the Solar Snake project, part of a larger plan by the Lebanese Center for Energy Conservation (LCEC) whereby 10 MW of capacity is targeted through solar field expansion. Moreover, solar units are relatively mobile and suitable for installation both on and off the grid. The private sector has to date installed over 30 MW of photovoltaic systems. In the 2009 to 2014 period, over 190,000 sqm of solar water heaters had been installed in Lebanon.

Lebanon’s economy is in a flat period of performance, largely impacted by escalating regional conflict and political question marks at home. And while jurisprudence and transparency have now been set in law, the scale and pace of its ambitious, green-tinted plans will likely be determined by the government’s willingness to grasp the energy bull by the horns.