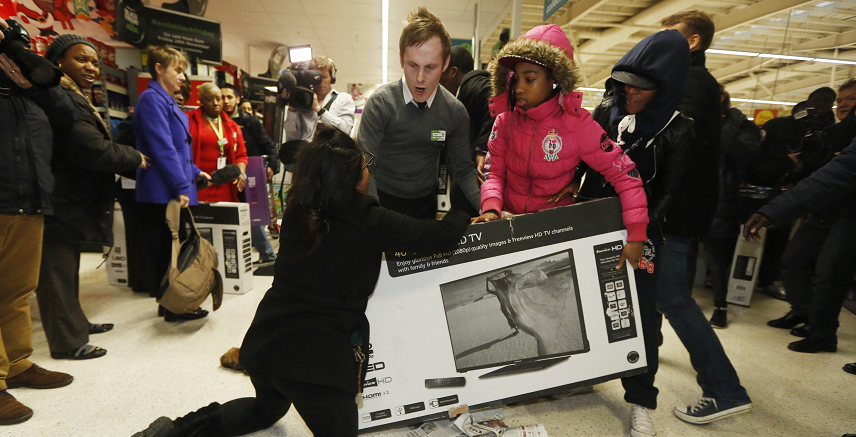 Share on:
Governments and retailers have long understood the power of spurring consumption through one-off festivities. Can China overtake the US with a model of their own?

For many, any excuse to shop, drink, or go to the movies is a good one. As economists have shown time and again, alcohol, cosmetics, and cinema tickets are often the only recession-proof luxury commodities in advanced economies, along with funeral services.

Yet as firms and governments have long known, purely fabricated festivities can also spur consumption.

In China, for example, where men under 30 now outnumber women by 34 million, mega-retailer Alibaba has done much to make Single’s Day the largest commercial event in human history.

Known in Chinese as Guang Gun Jie, or “Bare Sticks Holiday,” a teasing reference to bachelors, Singles’ Day got its start as a playful anti-Valentine’s Day formed by students at Nanjing University in 1993.

Feted on November 11 to commemorate the number 1, which celebrates “aloneness,” according to its practitioners, the day has become a rallying point for millions of young people to vindicate their solitude by buying themselves a present.

With demographers now predicting that a quarter of all Chinese men in their late 30s will still be unmarried by 2030, the inauguration of such a holiday is not only good economics, but good mass psychology.

As William James said: “To give up pretensions is as blessed a relief as to get them ratified.”

Marching in the black

However, Singles’ Day has yet to take on the international renown of its US rival.

Perhaps this is because gender ratio imbalances are less pronounced in the West, where women have long outnumbered men, or perhaps because the US had a century’s headstart in developing mass consumption.

“Black Friday” was first used by Philadelphia beat cops to describe the horde that descended upon the city to go shopping before Saturday’s big Army-Navy game, the term was anesthetized in the 1980s to refer to retailers going “in the black” for the first time all year, i.e. turning a profit (as opposed to “in the red”).

Now an annual event in the UK, Ireland, Canada, Australia, New Zealand, Germany, France, Italy, Belgium, South Africa, and Brazil, Black Friday has spread across the developed world like so many fat cells on Thursday afternoon.

Go forth and save

Promising a glut of savings, the occasion offers consumers historic deals, but little respite; since Cyber Monday was launched in 2005 to encourage online retailers to offer similar breakneck discounts, Black Friday has morphed into a four-day shop-a-thon.

While US retailers generally net around USD50 billion, their counterparts in the UK brought in USD10.11 billion in 2017, compared to USD7.45 billion in Germany, USD6 billion in France, USD3.8 billion in Canada, and USD3.5 billion in Italy.

Economies of scale can easily trump profit margins, allowing retailers of smartphones, televisions, electronics, and footwear to flood the streets with top-grade stuff once a year to recover in volume what they lose in margins. But if the magic bullet works so well, why not fire it off a few more times?

Any more often than once a year—say, a Black Monday for Memorial Day weekend—might bristle even Americans’ grasp of the sacred; the much-needed consumer belief in scarcity; or simply fall upon a day when most people need to work.

Our work-life balance, and even civic religion, say economists, simply won’t allow for it. How then has it captured the imagination of the rest of the world?

Through that classic vector of US cultural power: Britain. Though Amazon has been in the UK since 1998—merely three years after launching its operations in the US—only in 2010 did it start offering breakneck Black Friday discounts. And as goes Ohio, so goes the world.

With Amazon pushing the envelope, it was not long before copycats with smaller economies of scale caught on: electronics retailers Currys and PC World began offering discounts in 2012, and supermarkets Tesco and Sainsbury’s joined the fracas in 2013 and 2014.

But the real kicker came when the Walmart-owned Asda supermarket started throwing up massive discounts in 2013.

After that, it was sink or swim for High Street; smaller retailers had no choice but move weight at similar breakneck discounts.

Yet like an adolescent punter, the sugar went straight to the head: US-style “doorbuster” events quickly bred chaos, leading to fights in dozens of stores and hundreds of police needing to restore order. Asda itself was forced to call off Black Friday in 2015 and 2016, opting instead for smaller sales scattered throughout the month of November.

But the toxin stuck. In France, retailers as diverse as Auchan, Fnac, Darty, La Redoute, Leroy Merlin, and Géant Casino joined Amazon and Apple in 2014 in offering Black Friday deals.

That said, the Fédération du E-Commerce et de la Vente í  Distance has been lobbying since 2015 to rename Black Friday “Jour XXL” (XXL Day) or “Crazy Week” to not sully the memory of the victims of the mass terror attacks in Paris on Friday November 15, 2015.

Though Amazon and other US retailers helped bring the bug to Canada, France, and Germany, it was through government efforts that places like Mexico caught on.

Since it is always 5am somewhere, as the shopaholic knows, in 2011 the Mexican government, in partnership with a wide range of national retail networks, inaugurated “El Buen Fin,” the Good [week] End, as a means of boosting consumer demand in a sluggish economy with a US-style four-day shopping bonanza.

Slated for the weekend before Revolution Day, which for the past century has fallen on November 20, one of Mexico’s most important national days was shifted to the third Monday of November.

And with good reason. After a series of earthquakes decimated a number of vulnerable regions in September 2017, the Ministry of Tourism personally oversaw 2,500 offers from 660 travel agencies to encourage Mexicans to visit their country’s worst hit areas over El Buen Fin that year.

Revenge of the gringo

The economics, much less social utility, of Black Friday are still far from given: for starters, research suggests the bonanza’s one-day stimulus, if prolonged, can have a deflationary effect, forcing companies to slash workers to make up for lost margins.

What’s more, a large share of the estimated USD935 spent per US consumer (in 2016) was made via credit card, dedicating huge chunks of future American earnings to interest payments rather than consumption, savings, or investment.

As one blogger put it, “the Austrian School of economics suggests that we could have a better economy if the burst of economic activity in late November and December were spread throughout the year and people did not spend money they do not have on items they do not need.”

But that wouldn’t be the American way. Nor, for that matter, is it likely to be the Chinese, British, Mexican, South African, or Brazilian way for much longer.