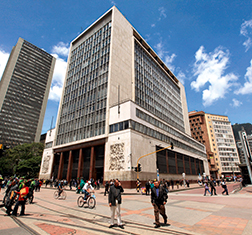 Share on:
Colombia's concentrated banking sector, where the top five institutions hold roughly 60% of total assets, is well regulated so as to withstand external headwinds, but remains underpenetrated.

Colombia’s economic growth decelerated to just 2% in 2016, as it faced a further term of trade shock due to commodity price slumps and the perennial El Niño effect, with a repeat performance foreseen for 2017. According to Juan Carlos Mora Uribe, the CEO of Bancolombia, Colombia’s largest bank, “[while] we are positive about 2017, it is (…) a transition into 2018—then we will see bigger growth.” Likewise, Juan José Echavarrí­a, the Governor of the Central Bank of Colombia (BRC), explained to TBY that while “2017 will outperform 2016, growth rates close to 2% are not enough, and Colombia has to regain the rates of 4%-4.5% reached over the past 15 years.”

The BRC, established in 1923, oversees monetary policy supportive of economic policies that foster growth of production and employment. On April 29, 2017 it cut its key interest rate by 0.5ppts, confirming to the analyst community that the economy would need assistance to return to a desired growth path, citing the risk of an excessive slowdown.

Subsequent cuts, it stressed, would again be determined by a balance of risks between gradual inflation reduction to the targeted 3% and unwarranted economic deceleration. Inflation had peaked once oil and other commodity prices tanked, whereby foreign investors turned away from Colombia’s natural resources. In consequence, the peso slid, while inflation became problematic. In March the central bank cut the policy rate by 25bps to 7%. Yet the banking system has withstood local torpor and global woes, while reaping renewed interest in emerging markets. And in step with the peace dividend and any improvement in broader macro conditions, such as higher employment and consumer confidence, the sector stands to benefit from as-yet-untapped participation.

The provision of checking accounts is the exclusive reserve of commercial banks, with certain institutions specializing as mortgage banks. Commercial banks dominate the financial universe, on more than 80% of total financial system assets. A glance back at turbulent times reveals a scythe mowing through a larger number of players. In fact, subsequent to the 1998-1999 financial crises, close to half of banking and non-banking institutions went to the wall, were taken over, or obliged to merge. Then, 2009 legislation entitled eligible foreign banks and insurance companies to operate locally without incorporating a Colombian entity, by opening a branch in Colombia. Foreign entities perceiving longer-term dividends thus entered the fray, boosting competition and prompting official efforts to regulate the sector for a sustainable future. In January 2012, Canada’s Scotiabank spent USD1 billion to buy Colpatria Bank. Additionally, Helm Bank was bought for USD1.3 billion by Chilean group Corpbanca in late 2012. Foreign bank assets as percentage of total bank assets according to the Global Financial Development Database averaged 13.3% between 2004 and 2013, with a low of 10% in 2004 and a peak of 20% in 2005. Additionally, the predictability of the local banking system has enabled its regional footprint to grow, whereby Colombian banks have diversified their income streams.

The government is activating game-changing infrastructure spending such as the 4G road scheme, the largest in Latin America, which would stimulate the financial sector. Related investments are earmarked at USD3.2 billion this year, and infrastructure programs will remain the primary driver of lending growth throughout 2017 and 2018. Notably, the preference in the Andean markets to fund such schemes through the banking system, rather than the capital markets, tends to squeeze liquidity amid the cost of funding. Meanwhile, private-sector investment may be shelved ahead of the May 2018 presidential elections to observe the outcome.

Any financial system benefits from healthy national ratings, with the reverse also holding true. In early 2017, Fitch joined S&P in attaching a “negative” outlook to Colombia’s financial system. In 2016 Fitch had downgraded Colombian banks, including Corpbanca Colombia, Bancolombia, and Banco de Bogotá, citing a rising current account deficit (6.4% of GDP in 2015), high external debt at 37% of GDP, and a widening central government deficit—up to 3.9% of GDP in 2016 from 3.1% in 2015. Moody’s had downgraded its banking system outlook to negative in July 2016 in the wake of low oil and commodity prices denting the economy and reducing banks’ ability to retain earnings as costs of lending rose.

The Financial Superintendence (SFC), which regulates both Colombia’s banking system and capital markets, disputed the Fitch downgrade, insistent that financial regulation was the most rigorous in the region and citing sector solvency of 15.46% in 4Q2016, despite a regulatory minimum of just 9%. Indeed, financial system oversight has been a cornerstone of its evolution. Financial sector reform in 2009 boosted customer protection and transparency, whereby, for instance, the associated costs of banks’ operations had to be declared. Gone, too, were the days when the consumer bore the burden of proof in any dispute with the banks. In 2014 the SFC’s strategic guidelines for 2015-18 highlighted institutional capacity building contingent upon a better educated workforce, checks and balances of financial conglomerates, and tangible success in instituting the Basel II and Basel III regulatory frameworks. Elsewhere, current regulations stipulate a cap on interest rates for loans imposed by the SFC with fines imposed on violators to stimulate credit activity. As of June 2016 the ratio of total loans to GDP was at 50.6%, while the ratio for consumer loans to GDP was 12.96%, for commercial loans to GDP was 28.95%, and for mortgages was 7.03%. In 2015, and in a first among EMs, Colombia voluntarily undertook a pilot self-assessment under the Key Attributes of Effective Resolution for Financial Institutions program, conducted by the IMF, the FSB, and the World Bank.

Back in 2012, Colombia became a signatory to the Alliance for Financial Inclusion’s “Maya Declaration,” an international initiative tasked with unlocking “the economic and social potential” of the estimated 2 billion unbanked people across the world. Two years later President Santos initiated a national financial inclusion strategy cemented in law in 2015 through decrees 2338 and 1491. The SFC’s strategic guidelines for 2015-18 also target greater formal financial inclusion among low-income Colombians. Just 39% of adults have a formal bank account, while for women the figure drops to less than 35%.

Persistently low credit penetration is evident in the fact that while 70% of people have a savings account at a main bank, 50% had taken out a loan and 52% a credit card with the same bank as of 2014. Liquidity concerns require a deepening of the banking sector if credit is to become more appealing to the millions of people not banked in the formal banking system. Yet consumer confidence, too, will need to firm up given persistently high unemployment of over 11% in January 2017. As of December 2016, commercial credit had risen by 11.4%, consumer credit by 13.2%, and mortgages by 15.1% YoY, together making for an annual rise of 12.2%. Bank credit to the private sector as a percentage of GDP according to the World Bank averaged 28.07% from 1960 to 2015, troughing at 17.55% in 1973 and peaking at 47.11% in 2015.

Banco de Bogotá, branded as a “Bank for All,” is set to extend its Route to Financial Inclusion literacy program in 2017 to a further 50 municipalities through a mobile office initiative to rural areas. Since 2008 the bank has extended around 125,000 microloans at an averaging COP5 million. Around 10% of recipients had no previous contact with the formal banking system.

Elsewhere, Luis Enrique Dussán, President of Banco Agrario de Colombia, the country’s sole state bank, explained its transition to a development bank. As the name implies, the bank is geared towards developing the agricultural sector, one of the largest in Colombia. And given the importance of the peace dividend, he notes that “The Colombian conflict was actually born in the rural areas because of the differences in the distribution of land.” Therefore, “giving the rural population access to credit will help the development of the entire country.”

International think tank the Brookings Institution ranked Colombia second in its 2016 Financial and Digital Inclusion Project Report, with a score of 100% regarding its commitment to financial inclusion, while the regulatory environment scored an impressive 89%. At the institutional level, on May 11, 2017 Canadian financial services giant Scotiabank garnered the Latin American Retail Bank of the Year Award from Retail Banker International (RBI), notably for digital innovation. Bancolombia CEO Uribe explained how “digital innovation and customer experience are central to our innovation strategy.” For 2017, related projects include a completely digital bank called Nequi.

Sector research indicates that by 2018, 20% of all smartphones worldwide will feature a mobile wallet facility. Colombia stands to rank well on this front, as Ministry for ICT data points to 2.5 million people actively engaged in digital money management. Colombia also ranks third in Latin America in smartphone transaction volume after Brazil and Mexico. The Financial Superintendence puts 2014 mobile banking growth at a staggering 334%, thus becoming the swiftest-growing banking service sector. Broadening the range, Banco Agrario de Colombia has launched an application that does not require a smartphone.
In conclusion, then, Colombia’s banking sector is well regulated, but must further tap the unbanked for depth, while peace could yield medium-term dividends.