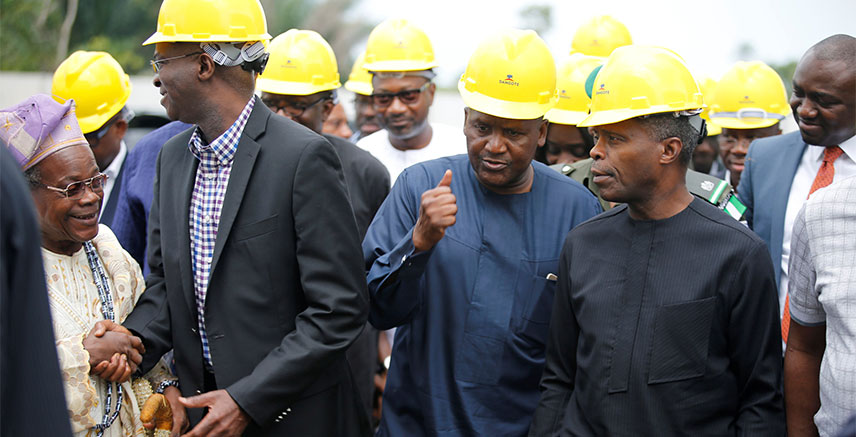 Share on:
Africa's largest cement producer, Dangote, eponymous with the continent's richest man, Aliko Dangote, received a much-welcomed coal-mining concession from Tanzania to power its cement plant on the Indian Ocean. Production at the 3 million ton facility had been halted since December.

It hasn’t been an easy year for Africa’s richest man, Aliko Dangote. Down USD700 million (7%) in the last 12 months, his net-worth has fallen USD6.64 billion since June alone, some 40%. For less stoic specimens, this might dent their stride. Not so in the case of Dangote. For the man whose companies’ net value represents one-third of Nigeria’s total market public value, the best time to plant a tree is now.

On March 13, the Tanzanian ministry of energy and minerals announced it was granting the Dangote Cement Company a 10sqkm plot of land in the southwestern mining basin of Ngaka, not far from Lake Malawi, to dig for coal.

The mine will be used to meet the energy needs of Dangote’s cement-producing facilities in Mtwara, a city on Tanzania’s Indian Ocean coast, some 400km south of Dar es Salaam. Normally powered by expensive diesel generators, it is hoped the new influx of coal will help Dangote boost its annual production capacity from 3 million tons to 6.

The cement plant halted production in December due to expensive energy costs and technical difficulties, waiting to see whether the Tanzanian state would heed its pleas for help in reducing production costs. After much arm-twisting, it did.

For Tanzania, a country weary of undue external economic influence under its new president, John Magufuli, the concession is not only bold, but uncharacteristic.

A colorful leader and devout Catholic family man who made a name for himself doing push-ups on the campaign trail, promising to fight corruption, cut government largesse-related costs, and build up Tanzanian industry, Magufuli’s move to placate Africa’s hardest-hitting industrialist may take some by surprise.
After all, one of Magufuli’s first moves taking office in November 2015 was to ban the import of South African coal.

Ironically, however, it is his anti-corruption efforts that have done the most to spook the private sector, whether local or international. By slashing wasteful spending (such as relocating government conferences hosted at lavish hotels rather than local government ministries) and borrowing locally rather than internationally (to avoid high interest rates), Magufuli’s economic policies have had an inadvertent crowding-out effect.

By borrowing heavily from local banks, lending markedly declined in various sectors of the economy, particularly transport, agriculture, and mining. Combined with policies such as forcing all foreign-owned telecoms companies to list on the local stock exchange, Magufuli ruffled more than a few feathers in his first long year in office.

This is why the concession to Dangote not only bucks a mildly autarkic trend in Tanzania; it also reveals the confidence that Dangote commands throughout the continent across a plethora of ideological persuasions.
After all, the concession represents a third way of sorts. Though loath to rely on importing (South African) raw materials, Tanzanian firms are not able to produce coal or cement anywhere near the capacity that President John “The Bulldozer” Magufuli envisions.

Thus when Tancoal, the only coal-producing entity in Tanzania, failed to meet the Dangote cement plant’s energy needs, the venture that had previously held a nationwide monopoly on coal production was forced to cede 10sqkm of its concession in Ngaka to allow the Nigerian powerhouse a spade of its own.

Beggar thy neighbor, or build his capacity

To be sure, Tancoal still controls the other 840sqkm of the country’s largest southwestern coal basin. A joint venture in which 70% is owned by Intra Energy Corporation, listed on the Sydney stock exchange, and 30% by the Tanzanian public investment firm, the National Development Corp, Intra complained that the Tanzanian government was showing the Nigerian firm preferential treatment.

Whatever the case, for Africa’s largest producer of cement, Dangote’s new coal concession comes as a boon to future production—and an opportunity to kill at least two birds with one stone.

First, by supporting the firm’s efforts to diversify outside of Nigeria, where a caliginous economic environment has sharply dented both Dangote’s outlook and net-worth.

Second, by boosting its presence in what many see as East Africa’s “sleeping giant,” a country with 52 million people that many expect to double in the coming decades; a stable political system (the same party has governed the country since independence in 1961); and strong and amicable ties to Europe (Britain), Asia (India), and the Middle East (Oman).

For a country growing at around 7% a year, huge natural gas and limestone reserves, and a budding tourism sector, the opportunities for cement production in Tanzania are more than robust. Though Dangote already has a total production capacity of 43.6 million tons across the continent, it hopes to increase this to 75 million by the end of 2019 and 100 million by 2020.

Ambitious? Without a doubt. But if it follows its current strategy of outbidding local and international competition by undercutting competitors before later boosting prices, Dangote’s path to doubling production in Tanzania seems less crazy. With one of the world’s lowest per capita cement consumption rates and a highly ambitious—not to mention ruthless, well loved, and effective—presidents, Dangote seems exceedingly well placed to enjoy the fruits of future Tanzanian growth.