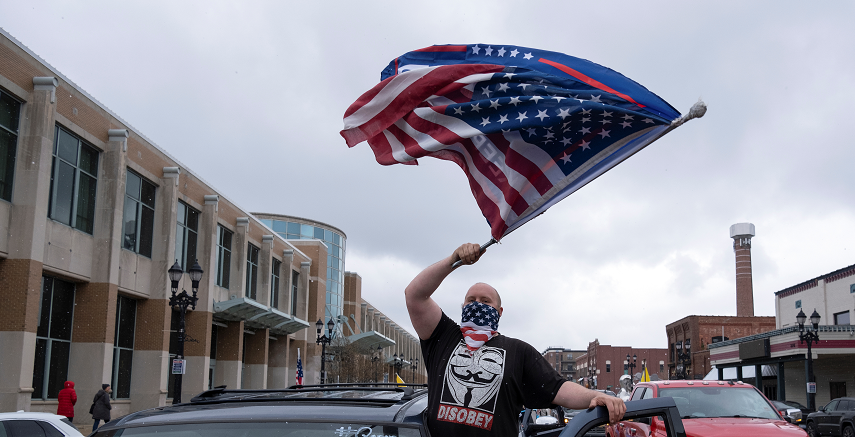 Share on:
The rampage of the virus across the Midwest has claimed thousands of lives and millions of jobs, making the region that handed Trump his 2016 victory more politically volatile than ever.

Despite the fact that COVID-19 has hit the East Coast of the US harder than other regions— claiming the lives of over 14,000 in New York, 4,000 in New Jersey, and nearly 2,000 in Massachusetts—deaths in the Midwest are not far behind. Michigan and Illinois alone have suffered more than most European countries, with 2,500 and 1,400 deaths respectively as of Monday, April 21.

While over 13% of all Americans have lost their jobs since March—some 22 million people—figures for the Midwest are even worse. Michigan, arguably the country’s most battered, has seen 1.05 million new unemployment claims in the past month, bringing its total unemployment to a staggering 21%, second only to Hawaii.

The other rustbelt states that went big for Trump in 2016 are hardly faring better. Ohio saw an additional 854,000 claims since March, pushing its unemployment up to 14.7%. Pennsylvania’s figures ballooned by 1.3 million claims, or 19.8% of its workforce.

And though Illinois, the fourth regional giant, is doing better, it still saw 634,000 new claims since March. It now has 9.9% of its population out of work.

Unemployment is the leading reason that thousands have protested stay-at-home orders across the Midwest this past weekend.

Taking to governors’ residences and state houses in Lansing, Michigan, Columbus, Ohio, St. Paul, Minnesota, and Harrisburg, Pennsylvania, and Springfield, Illinois, protesters urged state governments to lift restrictions and order people back to work, all with the full support of President Trump.

Taking to his usual platform, Trump tweeted calls to ‘LIBERATE MICHIGAN!’ and ‘LIBERATE MINNESOTA!’ on Friday, while a photograph taken that same day of protesters donning MAGA hats and trying to penetrate the Ohio state capitol in a Dawn-of-the-Dead-like fashion has now become one of the most iconic images of the coronavirus crisis in America.

Though understandable that many want life to return to normal, media attention from these protests underscores the brutal reality of the matter: not only are thousands across the Midwest dying, but an overwhelming proportion of them are African American.

In Michigan, for example, which as of April 21 had 32,000 official cases and nearly 2,500 deaths, 40% of fatalities have occurred among African Americans (who account for merely 13.6% of the population). The state’s youngest person, a five-year old African American daughter of two first responders in Detroit, passed away this week.

The Land of Lincoln has had a similarly depressing disparity in COVID-19 cases, out of a total of 31,500 cases and nearly 1,400 deaths as of April 21. Nearly 70% of Chicago deaths have occurred among African Americans, though they only account for 30% of the city’s population.

Though black Chicagoans already lived an average of nine years less than whites of the same city, they are 400% more likely to die of COVID-19 than any other race.

Long-term care facilities have also been severely affected in Illinois. Already 186 cases have been confirmed in such facilities across the state, representing a quarter of overall deaths.

To combat the virus’ spread, Governor Pritzker issued a state-wide stay-at-home order that lasts through April 30 and will likely be renewed. On Monday, a shipment of millions of masks and gloves arrived from China, which are being taken by the Illinois National Guard to the state warehouse to then be distributed across the state.

While Illinois Senate President Don Harmon requested more than USD41 billion from Washington to stabilize state finances as part of a new coronavirus relief package, Illinois Senate Republicans (understandably) lambasted it as an attempt to use the pandemic to cover years of mismanagement.

While less battered, America’s Dairyland still had 4,500 cases and 230 deaths as of Monday. Like elsewhere in the Midwest and North, its cities’ history of segregation has had a harrowing effect on determining who dies from COVID-19. Though Blacks make up only 27% of Milwaukee’s population, they now account for 51% of its cases and 57% of the city’s deaths.

Luckily, 4,447 of Wisconsin’s 12,266 hospital beds are still available, including the majority of its ventilators. But if cannot stow the tide of the pandemic within its most vulnerable communities, it risks seeing numbers closer to those of neighboring Illinois and Michigan before long.