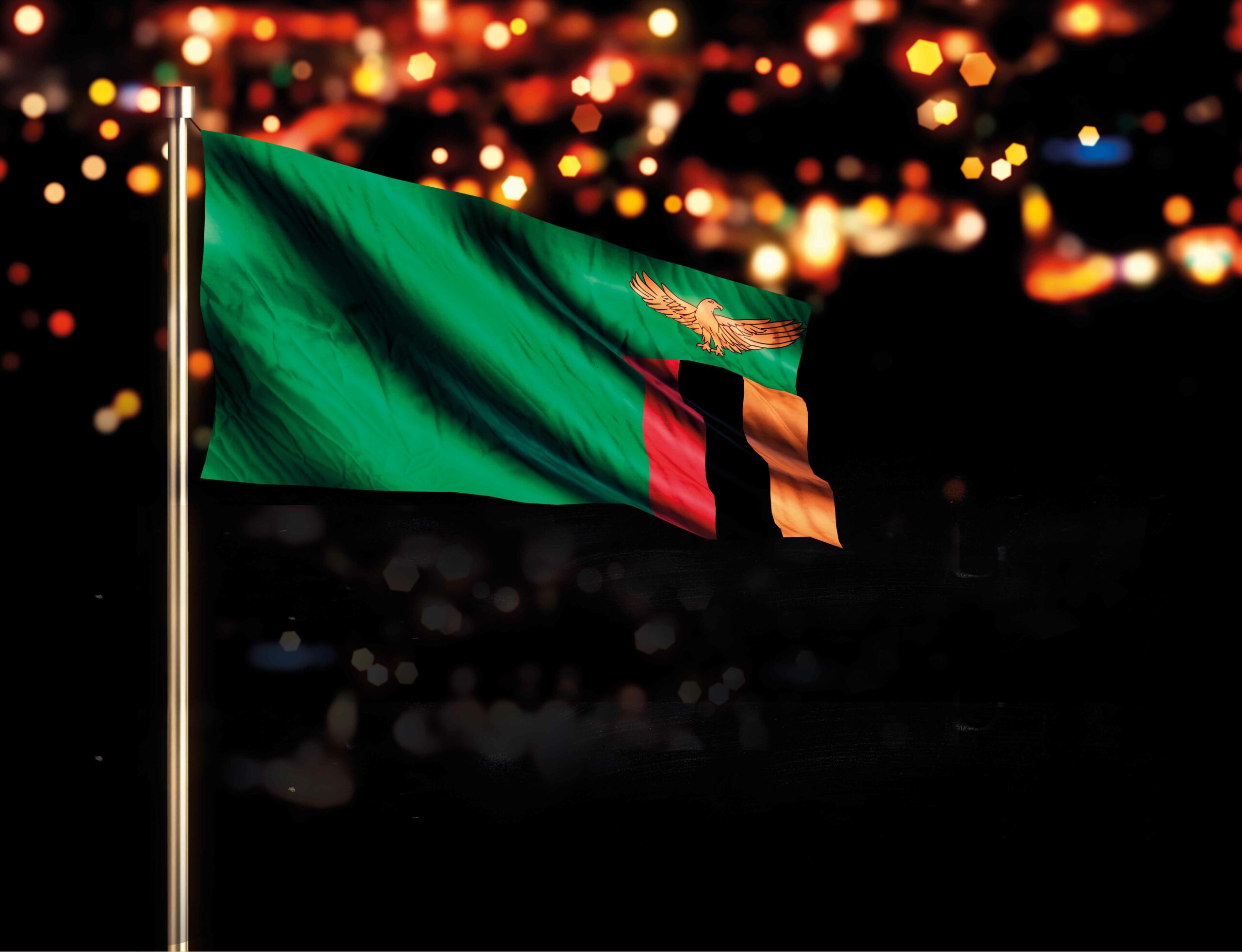 Share on:
Squeezed between a rock and a rather hard place by the slowdown in Chinese demand for copper, by far Zambia's biggest export and government-revenue generator, President Lungu has been forced to get creative in his country's alliances to broaden revenue streams and lessen its dependence on the vagaries of one foreign market.

Zambia escaped the series of wars, unrest, and post-colonial social breakdown that shaped much of southern African history in the past half-century. Yet, while it managed to evade (local) man-made disasters, it still has to deal with the wrath of mother nature and, for a country overly dependent upon commodity exports, the tyranny of blind market forces. As the second-largest copper producer in Africa and the eighth largest in the world, Zambia remains critically over-dependent upon the metal: it relies on copper for 70% of its foreign currency reserves and 30% of total government revenue. And the last two years have not been kind to copper.

With China accounting for 40% of the metal’s global consumption, any slowdown in the middle kingdom causes serious ruptures in the Zambian economy and, by extension, politics and society. Indeed, one metric found it was the country most exposed to fluctuations in the Chinese economy in the entirety of Africa. And though the country experienced unprecedented growth starting around 2000, growing on average 6.4% between 2005 and 2015, a falloff in demand from China combined with a domestic energy crisis fueled by poor water management led to the massive decline of the price of copper, the momentary closure of several of the country’s largest mines (the Anglo-Swiss conglomerate Glencore’s mine in Mopani and the Chinese-owned Luanshya Copper Mines at Baluba), and the near-collapse of the country’s currency, the kwacha.

With the sad distinction of being Africa’s worst-performing currency in 2015, President Edgar Lungu, first elected in January 2015 following the unexpected death of his predecessor, Michael Sata, found himself forced to take drastic measures to save the kwacha from further erosion. Thus he issued a sovereign bond in July 2015 that helped raise USD7 billion toward plugging the hole in foreign currency reserves and government revenue. In combination with further belt-tightening by the Zambian central bank, this helped stave off further decline of the kwacha—but it significantly increased the country’s public debt to GDP ratio.

As a result of these tumultuous economic trials, the country has been forced to reevaluate several of its longstanding diplomatic, geopolitical, and philosophical positions in the region. Though far from a continental powerhouse, the country has taken a strong stand on various issues over the years, not in the least its support for the Sahrawi Arab Democratic Republic (SADR) and its chief political-military advocate, the Polisario Front, against the Kingdom of Morocco in those parties’ claims to represent the legitimate government of the Western Sahara.

In February 2016 President Lungu made an unsuspected move when he decided to recognize the independence of Western Sahara and accuse Morocco of colonizing another African country. This came in addition to several pointed criticisms that Lungu had made of Morocco for purportedly turning its back on Africa in its desire to establish closer ties with Europe by attempting to join, among others, the European Economic Community. “I wish to assure you,” he reassured Western Sahara’s ambassador to Zambia Salam El-Mami in February 2016, “of our relentless collective calls for the independence of the people of the Sahrawi Arab Democratic Republic.”
In December 2016, the king of Morocco repaid the favor by canceling last minute that monarchy’s first-ever planned visit to Zambia, a move that led to much speculation. Then in January 2017, with the ball back in Lungu’s court, he returned the volley by inviting the president (in exile) of the Sahrawi Republic, Brahim Ghali, to Zambia. During their meeting, Lungu told his “counterpart”: “We are truly behind Sahrawi for the emancipation of the country and its people.” He added to that by reiterating the unity of the African continent and reprimanding those “northern” parts of the continent that sought further concurrence with Europe.
The point, it would seem, had been made more than clearly enough. Zambia and its president were not only standing by the only member of the African Union, the Sahrawi Republic, not to enjoy internationally recognized (or real-life appreciated) sovereignty; they were working to isolate the one African country, Morocco, which did not enjoy membership in the African Union. Having left what was then the Organization of African Unity (OAU) in 1984 to protest that body’s acceptance of the Sahrawi Republic, Morocco spent the next 33 years in the (relative) diplomatic wilderness.

All that changed in February 2017 when King Mohammed VI paid an unexpected trip to Lusaka, the capital of Zambia. In an abrupt volte-face, Lungu had a change of heart (as a result, it would seem, of a literally good change of fortune) and recognized Morocco’s claims over Western Sahara. Hosting the first visit of a Moroccan head of state to Zambia, Lungu also oversaw the signing of 19 partnership agreements between Morocco and Zambia.

Accompanying the Moroccan king were that country’s ministers of housing and urban policy; agriculture and fisheries; tourism, industry, trade, investment, and digital economy; energy, mines, water and environment; and health. Several civilian and military figures also accompanied the royal entourage. But the move was more than a bilateral warming of ties; coming just on the heels of Morocco’s reentry into the African Union (January 30), it was also a “hearts-minds-and-wallets” extravaganza in which the kingdom rewarded regional allies for what had been a controversial process of gaining re-admittance into the continental club.

After all, Zambia and Lungu in particular were forced to go against the explicit wishes of their largest trading partner, South Africa, in backing Morocco’s reentry into the club (without relinquishing its claims on Western Sahara). But though South Africa accounts for one-third of Zambia’s imports, they aren’t forking over the nitrogenous fertilizers for free. In return for cash and, presumably, knowledge, the newfound friendship with Morocco works in both countries’ favors: Morocco gets a vocal ally that relinquishes its long-time opposition to Morocco’s annexation of Western Sahara, while Zambia gets much-needed cash flows in a time of acute economic turmoil.

As if to prove his metaphysical as well as diplomatic independence, Lungu has also changed tack on the Israeli-Palestinian question. Though an unsuspected source of diplomatic inspiration for the millennium’s thorniest issue, Zambia’s newfound commitment to Israel is in line with the rest of Lungu’s diplomacy: known as the confound-and-collect blitzkrieg, it is a nuanced form of statecraft that backs the least-popular side in a controversial conflict. In return for its independence of spirit and ability to think outside the box, Zambia’s diplomatic support is rewarded by its weight in gold and expertise.

A deft maneuver, it already seems to be paying off. Opening the first Zambian Embassy in Tel Aviv in 2015, the Zambian president was warmly received by Prime Minister Benjamin Netanyahu in February 2017 to discuss commercial and knowledge transfers between the two countries. Bringing a bevy of ministers with him to discuss agriculture, water, education, security, and anti-terrorism with their Israeli counterparts, Lungu’s mission seems likely to cement a fruitful and long-term friendship.

Netanyahu, for his part, expressed Israel’s pleasure that Zambia was opening both a Jewish history museum and a synagogue in Lusaka. To bolster the friendship, he said, “We hope to send our experts to help with alternative energy, with water, and other areas.” In return, Zambia has agreed to buck the trend in the African Union and advocate for the renewal of Israel’s observer status, a position it lost in the organization (and which Palestine enjoys) in 2002. If successful on both accounts of increasing knowledge, capital, and energy-related transfers and efficiently lobbying for peripheral players within the African Union (in this case Morocco and Israel), Zambia will have taken an important step in offsetting its dependence on copper and the fluctuations of the Chinese economy with shrewd diplomatic legerdemain.

Closer to home, Zambia has also been boosting relations with regional partners in the Southern African Development Community (SADC), an integrated economic market of 15 neighboring countries whose total market is 294 million inhabitants. Though historically good, ties with Uganda in particular have been bolstered during President Lungu’s first and now second term. In 2016 the two countries agreed to open embassies in each of the other’s respective capital to replace the High Commissioners that previously carried out such duties. Yet even more important was the announcement in July 2016 that plans were underfoot to build an oil pipeline from Uganda to transport crude from recently discovered fields (whose management France’s Total recently acquired) to Zambia’s Indeni oil refinery in the latter’s Copperbelt province.

While Lungu remains on close personal terms with Ugandan president Yoweri Museveni, he also partook in a diplomatic blitzkrieg across Africa in the autumn of 2016 that took him to Madagascar, Morocco, Equatorial Guinea, and Tanzania in November and Kenya, South Africa, and Egypt in December. Part of Lungu’s prerogative in doing so was to gain Zambia observer status in the Northern Corridor Transit and Transportation Coordination Authority, a transit agreement between the land-locked countries of Uganda, Burundi, and Rwanda, on the one hand, and Kenya, on the other, whereby the former gain access to the port of Mombasa on Kenya’s Indian Ocean coast.

Though Lungu came under fire at home for spending so much time abroad in the wake of his August reelection, on several occasions being unfavorably compared to Tanzanian President Magufuli—a man who “eschews foreign travel to fix his country’s domestic problems”—it is clear that Zambia cannot isolate itself from the international community, either. Rather, as Lungu seems to have intuited, it must diversify its connections, acquaintances, and mutual obligations. Only by doing so will it overcome to the economic—and hence geopolitical—isolation that comes from being overly dependent upon one lone commodity and a single export destination.

Not only can Zambia afford to take certain diplomatic gambles (as it has with Morocco and Israel) if it is to bring its people up from dire poverty, under which 60% of the country’s population currently beleaguers, it must.