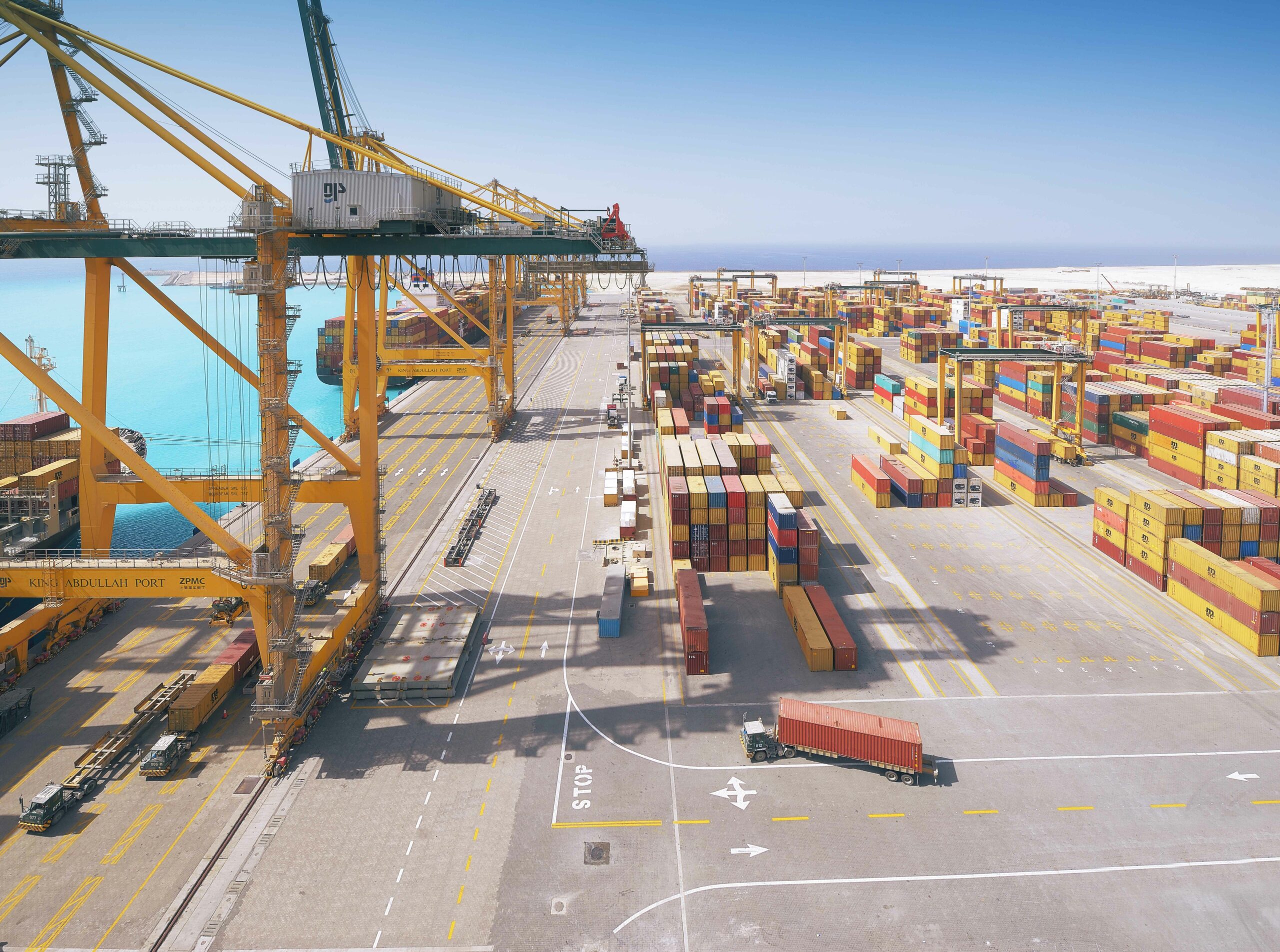 Share on:
Private and public transportation have greatly benefitted from major investments to bring improvements to the Kingdom's transportation infrastructure.

Transportation in the Arab kingdom has been a high- priority issue for the last several years. The city of Riyadh, the capital, for example boasts a population of over 7 million but had no effective public transportation system to speak of up until a few years ago. Meanwhile, high temperatures and the rugged terrain have posed challenges to the mechanics of road construction. The country is also the biggest market in the GCC, with over 28 million people but only two airlines serving domestic destinations. All that is now changing, however. The Kingdom has been invested heavily in the construction of ports, railways, roads, and airports over the last few years. The Ministry of Transport in 2015 earmarked another SAR1.326 billion for several projects in the transport sector, among them road repairs, surveillance, and control systems at rest stops along Riyadh’s highways and a 10-year public transport project involving buses in Mecca. However, tumbling oil prices around the world have significantly depleted Saudi Arabia’s coffers and the Kingdom announced in December it would be cutting back on investment spending for its 2016 budget by almost two-thirds, though major infrastructural projects would remain unaffected. SAR23 billion would also be allotted for infrastructure and transportation projects such as the Riyadh Metro and Jeddah’s King Abdulaziz International Airport in 2016, down from SAR63 billion a year ago.

The blueprint of the initiatives is the 2011 National Transportation Strategy, which identifies six key areas that require further attention: transport infrastructure development, freight transportation and trade facilitation, public transportation, Hajj transportation, transport safety, and environmental protection. The strategy was later supplemented by Vision 2030 to realize the Kingdom’s aim of building a regional logistics hub. One such project that will go a long way in supporting this goal is the recently completed 680km road between Saudi Arabia and Oman. The first direct overland link between the two countries, the highway removes the need for travelers to drive through the UAE to get to the other side. By cutting the distance between Saudi Arabia and Oman by 800km, the highway is expected to immediately boost bilateral trade and tourism.

Vision 2030, in addition to focusing on improvements such as implementing systems to drive higher performance and linking infrastructure internally and across borders, also highlighted the Kingdom’s plan to accelerate the rate of privatization to increase efficiency and productivity. McKinsey had estimated in December that the transport sector at present needs at least $450 billion in investment, comprising about $200 billion for rail and metro infrastructure and bus transit development, $130 billion for the construction of highways, roads, and connecting infrastructure, and about $100 billion for airport and seaport infrastructure.

Perhaps the most ambitious plan in the Kingdom is building the largest urban transit system ever from the ground up in Riyadh, comprising the construction of a metro network, a bus system, and other transport services. The Saudi Arabian government has invested $22 billion into a state-of-the-art metro network in Riyadh consisting of six main lines with total track length of 176km and 85 stations that will connect the city to commercial and retail areas, the financial center, and the airport. The metro megaproject is part of the King Abdulaziz Public Transport Project for trains and buses, His Royal Highness Prince Faisal Bin Bandar Bin Abdulaziz Al Saud, the Governor of Riyadh region and Chairman of the High Commission for the Development of ArRiyadh, told TBY, adding the city will also have a bus public transport network that will consist of 24 tracks totaling 1,200km that will cover the city with 1,000 buses. The public transportation project aims to reduce the use of private cars to cope with traffic congestion and pollution and meet the future needs of the city of Riyadh, the population of which is predicted to double by 2035.

In Mecca, similarly, construction of the Metro Mecca Project is also under way, with Dr. Osama Al-Bar, the Mayor of the city of Mecca, telling TBY the schedule for the completion of the overall project is set for 2029 with a total track length of 182km and 88 stations. Once complete, the metro will play a pivotal role in serving Hajj and Umrah pilgrims in Mecca once it is linked up with inter- and intra-city train and bus networks. The government noted in its National Transformation Program that the number of Hajj and Umrah pilgrims is expected to grow by 13% and 30%, respectively, every year to 2020, highlighting the need to modernize and expand the capacities of the Kingdom’s airports and provide a transit system that can ease some of the existing traffic congestion. The Kingdom has ambitious plans to accommodate 15 million pilgrims by 2020 and 30 million by 2030, and has initiated many projects in anticipation of such figures.

A key part of this goal will be the 450km, multi-billion Haramain high-speed rail line between Mecca, Jeddah, and Medina. Planned for a 2017 opening, the line will be able to accommodate more than 2 million pilgrims in 35 trains and is expected to replace bus travel between the cities. Trains will travel over 300 km/h and journeys between Jeddah and Mecca and between Jeddah and Medina will now take half an hour and two hours, respectively. The high-speed train will also be linked to King Abdulaziz International Airport as well as to Mecca metro stations. Construction of the railway line includes several suspension bridges 2.5km long and 24m high, as well as the biggest bridge in Mecca measuring 70m wide.

In line with efforts in the Kingdom to increase jobs for Saudi nationals and improve the quality of service provision and safety standards in the taxi transport sector, the Ministry of Labor and Social Development established Khidma in July. The company will simultaneously regulate the work of taxi companies in the Kingdom and improve working conditions, set the minimum wage, and regulate prices to make the sector more attractive for Saudis. The authorities aim to improve perception of the sector and provide more than 22,000 jobs to young Saudis over five years. This is the latest in the government’s initiative to nationalize sectors and increase the number of locals working in various industries.

Saudi Arabia has one of the smallest airline networks in the region relative to its size; however, it has been investing in multi-billion dollar projects to dramatically improve its aviation infrastructure, expand the capacity of its airports, and transform the Kingdom into a world-class air transport hub. The General Authority of Civil Aviation (GACA), the body overseeing the economic and safety regulations of the sector as well as the operations of all the Kingdom’s 27 airports, had reported in July that Saudi Arabia received over 78 million passengers in 2015, or 8,000 travelers every hour. King Abdulaziz International Airport in Jeddah saw the majority of flights and passengers in Saudi Arabia in 2015, handling 190,328 flights and over 30 million passengers, an increase of 7.3% over the previous year. Smaller airports like King Fahd International Airport in Dammam and King Khalid International Airport in Riyadh also saw impressive growth in annual passenger figures by 14.1% and 12.1%, respectively. Airports in the Kingdom, both international and local, are undergoing extensive upgrades and extensions to accommodate larger numbers of passengers and flights. The first phase of expansions to King Abdulaziz International Airport is scheduled to open in mid-2017 and will allow the airport to handle 45 million passengers by 2020. King Khalid International Airport in Riyadh, meanwhile, opened its new, multi-billion dollar Terminal 5 recently. The expansion is the first privately run terminal in Saudi Arabia, managed and operated by the Dublin Airports Corporation.

King Khalid International Airport was the first asset to be privatized based on a master plan developed by the Kingdom to boost productivity and efficiency at its airport systems and ease the government’s financial burdens. HE Sulaiman Al-Hamdan, the Minister of Transport and President of GACA, told TBY the body had established the Saudi Civil Aviation Holding Company to oversee the privatization process to turn airports and other sectors that are set to be privatized into business- and service-oriented corporations. HE Hamdam said all civil aviation projects are open for private investment, providing significant investment opportunities for the private sector including operating airports, providing ground services, as well as investing in commercial real estate in airport properties. Foreign companies will be allowed to invest without the need for local partners and GACA’s eventual goal is to turn every unit into a discrete, growing, and sustainable business that operates on a competitive basis.

The Kingdom’s national airline sector also looks set to open up further. Long dominated by local flagship carrier Saudia, which controls around 90% of the market, and low-cost carrier flynas, three new carriers are in the process of being launched. Saudia is set to introduce a low-cost carrier, flyadeal, which will serve both the domestic and international sectors. Qatar-based Al-Maha Airways and SaudiGulf Airlines are also preparing to launch services in the Kingdom.

The Saudi Ports Authority reported that the nine major commercial and industrial ports in the Kingdom handled a total of 233 million tons of goods, excluding crude oil, in 2015, up from 210 million tons in 2014. Total revenues for 2015 were SAR4.467 billion, an increase of 9.2% YoY. The commercial and industrial ports include Jeddah Islamic Port, King Abdulaziz General Port, King Fahd Industrial Port in Jubail, King Fahd Industrial Port in Yanbu, Jubail Commercial Port, Yanbu Commercial Port, and the ports of Jazan, Dhiba, and Ras Al-Khair. King Abdullah Port, Saudi Arabia’s first port to be fully developed and operated by the private sector, is currently the fastest-growing and most advanced port in the region. It has an annual cargo capacity of 3 million TEUs and had an annual container throughput of 1.3 million TEUs in 2015. In a bid to further take advantage of its location in the region and better serve its local oil-producing industry, Saudi Arabia plans to build a maritime and shipbuilding complex on its east coast to increase its capacity to export oil and eventually have a shipping fleet that will match its oil capabilities.