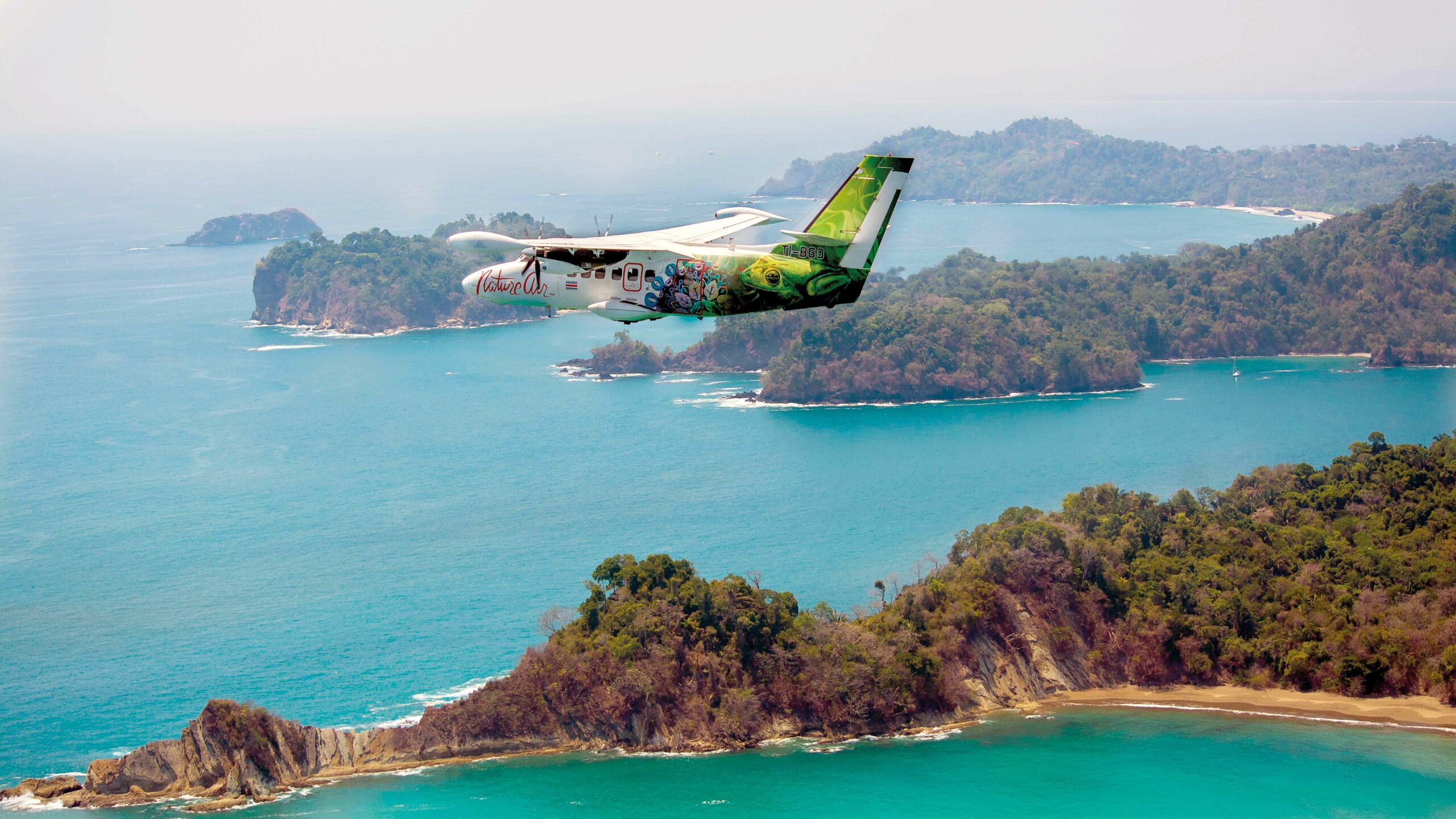 Share on:
While Costa Rica is demonstratively an upper-middle-income nation, it is a given that the condition of a country's transport matrix determines whether its growth potential is met.

In terms of transportation, the country remains short of its true potential, both economically and in terms of fulfilling its vocal green ambitions. Bureaucratic complications, too, need to be corralled. The 2016 OECD report “A bird-eye view of Costa Rica’s transport infrastructure,” indicates that in the 2002 to 2013 period, transport infrastructure spending had averaged below the OECD average of 0.8% of GDP. In the global context, Costa Rica ranks 115th for road quality, 95th for railroads, 109th for ports, and 60th for airports as of 2015.

Concrete steps have been taken to rectify this. Regarding the green component, Costa Rica has pioneered carbon pricing to incentivize green development. In 1997, it also levied a tax on fossil fuels, and in 2012, it introduced the Domestic Voluntary Carbon Market, enabling the trading of carbon credits. These initiatives are vital if Costa Rica is to fulfill its ambitious 2009 pledge of becoming carbon neutral by 2021. Currently though, the local transport sector—100% carbon-based—accounts for roughly 70% of total carbon emissions.
On another level, the very formulation and implementation of transport policy in Costa Rica has for decades been hamstringed by the diversity of bureaucratic structures involved. For example, while the Ministry of Planning issues the guidelines of public infrastructure schemes, these remain optional. The Ministry of Public Works (MOPT) is tasked with transport planning and policy formulation, and has been active in project realization. Yet since the 1990s semi-autonomous entities have been given responsibility for specific concessions, such as: the National Roads Council (CONAVI), with responsibilities for extending and maintaining the national road network; the National Concessions Council CNC, which promotes and manages concession projects throughout the infrastructure sector; and the Public Transportation Council (CTP), responsible for public road transport policy, such as that pertaining to buses and taxis. Then there is the National Railways Institute (INCOFER), which operates a once-abandoned network, the Costa Rican Institute for Pacific Ports (INCOP), and the Port Management Board of the Atlantic Coast Development (JAPDEVA), the respective port authorities for Costa Rica’s Pacific and Caribbean hubs. Finally, the Technical Civil Aviation Council (CETAC) and Road Safety Council (COSEVI) drafts its respective policy. This exhaustive list serves to underline an endemic problem of disrupted policymaking and opaque project pipeline that the state is working to reverse. Alonso Bogantes Zamora, the General Manager of MATRA, established in 1951 and today a distributor of Mack trucks, Caterpillar, and John Deere products, told TBY that, “Every year, for the past five years, we have been saying that the next year will be our year to stand out [although] unfortunately, the government’s road, bridge, and dam projects are not happening as expected.”

Decree No. 37738-MOPT of May 2013 introduced the NTP to expedite policymaking by combining the efforts of fragmented state transport entities. Total annual investment across the transport matrix to successfully realize the plan amounts to 4% of GDP per year between 2019 and 2035.

A core target of the NTP is national road network rehabilitation, average investment into which was at 0.69% of GDP between 2002 and 2013. The network, at close to 43,000km in length, equates to 84km per 100sqkm of land, thus four times the Latin America average according to World Bank data for 2012, and 20% of the total network overseen by CONAVI, and the remainder by local municipalities. Yet despite its impressive length, it remains in disrepair, as 62% of roads are deficient, 33% are in a regular state of repair, 5% are deemed to be in good condition, and none is in peak condition, due to much postponed maintenance. In contrast, the number of vehicles in circulation had climbed 68% between 2003 and 2014, with the attendant congestion and carbon footprint. A comprehensive long-term plan such as the NTP was in order. Its key objectives for the 2019 to 2035 period are completion of the Strategic Highway Network (SHN), as well as arterial roads in urban centers. Carlos Villalta Villegas, Minister of Public Works and Transport (MOPT), in a TBY interview, explained a novel project that has the potential to facilitate transport infrastructure management and planning, namely “… an electronic payment system, which could potentially enable users to pay with cards, while allowing us to obtain information through the system and observe the behavior related to the tariff regime.” CONAVI has realized a road infrastructure scheme financed by the IBD valued at USD300 million. CONAVI is also task-master regarding the construction of the Cañas-Liberia road linking Pozuelo and Jardines del Recuerdo in Heredia, and a road in San Carlos, among other access links. A 100km extension of the road connection to the Limon province was won by a Chinese firm.

Roughly 80% of Costa Rica’s total international trade is realized through seaports, and both seaports and airports are witnessing welcome upgrades. As recently as 2015, the grain terminal of Caldera Port was opened for business, while construction on the Moí­n container terminal began on the Caribbean coast, both as concession projects. Costa Rica’s traffic seaport network features the five facilities of Caldera, Puntarenas, Fertica, Punta Morales, and Golfito on the Pacific coast, and the two facilities of Limon and Moin on the Caribbean. Between 2011 and 2018 the NTP targets the full rehabilitation of the country’s existing seaport facilities. And the main strategic objective for the 2019-2035 phase envisages the completion of Moí­n port’s expansion, and of the cruise terminal in Limon, in addition to port extensions on the Pacific coast. Kenneth Waugh is the Managing Director of APM Terminals, which has a 33-year government concession for Moí­n Container Terminal. He told TBY that while, “Moin will not be the largest container terminal in Latin-America and… it will strive to be the most efficient one, a standard in safety and security to look up to, and in harmony with the environment.” In practical terms, a deeper draft will accommodate, “… the same transoceanic vessels that go through the Panama Canal, thus, for the first time connecting Costa Rica to this first tier shipping network.” The facility’s 650m quay, with a draft of 14.5m and six installed STS cranes, will facilitate the docking of vessels, “…of up to three and a half times the biggest vessel that actually docks in any port in Costa Rica.” The second phase introduces a further 600m of quay, while, “By the end of the third stage, we will have 1.6km of quay, and more than 85ha of container yard,” he concluded.

Sector data reveals that close to 100% of the population lives within 50km of local or international airports. The two leading facilities among four international airports are Juan Santamaria (SJO) in Alajuela, located 20km from San Jose, and Daniel Oduber (LIB) in Liberia, with both operating as PPP schemes. The latter’s PPP is confined to the passenger terminal. An additional international airport is scheduled to commence operations in 2025. Inadequate road infrastructure has meant that between 2014 and September 2016 domestic airlines saw rises of over 20% in passenger numbers. The poor state of the road infrastructure in the country is one of the main factors behind the increase in the number of passengers on domestic flights operated by carriers such as Nature Air and Sansa. According to the Civil Aviation authority, Nature Air alone transported 58,800 passengers in 1H2016, which equated to 87% of all customers in 2015. Meanwhile, Sansa carried 74,300 passengers for the period, 67% of the full 2015 performance. Nature Air’s Business Development Director Mauricio Castro, told TBY that with its 57% market share, the carrier is the preferred airline for Costa Ricans. He illustrated the advantage of domestic flying by stating that while the average flight took 15-20 minutes, even, “…our longest flight is 31 minutes to Puerto Jiménez (adding that) Puerto Jiménez is eight hours by car compared to a 31-minute flight.

In the late 1990s Costa Rica’s railway system was all but abandoned, but has gradually been rehabilitated since 2005. The national network is of 212km in length, with one line running to the Pacific and another to the Caribbean. Rail freight remains minimal, and reportedly confined to the Caribbean region’s banana and iron industries. Yet while the average annual investment in rail in the period of 2002-2013 was a predictable 0.01% of GDP, this is set to climb to 0.36% of GDP per annum during the 2019-2035 period of the NTP.
A mass rapid system, much required in the Metropolitan Area (GAM) of capital city San Jose, has not advanced. Ministry of Public Works and Transport (MOPT) data indicates that while roughly 75% of total passenger traffic in the GAM utilized public transport in 2011, this was mostly on buses, thereby compounding congestion and pollution. INCOFER data of 2014 put the cost of the most current proposal at USD1.4 billion with a projected completion date of October 2022. A key term to have emerged from studies into ideal transport solutions was metro-regional, meaning a coordinated approach to avoid the time consuming splintering of policy making mentioned earlier.

Encouragingly then, the MOPT, through its Public Transport Council (CTP), in February signed a framework cooperation agreement with the Municipalities of Curridabat and Cartago, to foster better access to public transportation. Pertaining to the PPP scheme to build a new bus terminal for connection between the two destinations, the agreement forms a component of the governments sectorization system of greater connectivity.

The legal framework governing private investment in Costa Rica’s transport infrastructure is the 1998 Law 7762 “General Concession Law of Public Works with Public Services.” Concessions are coordinated by the National Concessions Council (CNC), yet the perennial problem has been an unpredictable project pipeline, anathema to FDI. The OECD report indicates that just four projects have come to fruition since the law came into effect; Route 27, the Grain Terminal of Caldera Port, the Passenger Terminal of the Liberia International Airport, and the Moin Container Terminal. Meanwhile, the rehabilitation and modernization of Juan Santamaria International Airport and Caldera Port was realized using private capital, albeit under the terms of Administrative Contracting Law (No.7494). Rising transparency in the project pipeline will stand Costa Rica’s transport matrix in good stead going forward, by appealing to a wider investor base.

The Green Future is in Carbon-neutral Rail

A Model to Behold

Building The Next Digital Platform

Decarbonization at its Core