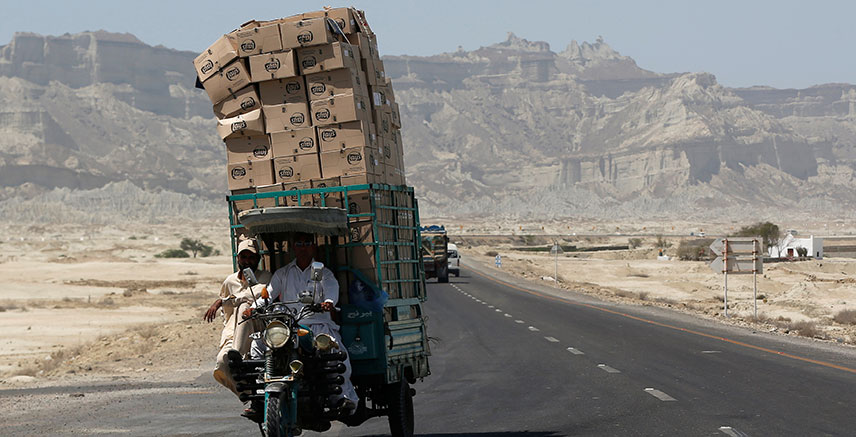 Kashgar to the Sea

Share on:
Though little known, the China-Pakistan Economic Corridor (CPEC) is far and away the most ambitious aspect of Beijing’s behemoth One Belt, One Road (OBOR) initiative.

Much of the global media’s eye in May was trained on China’s ambitious One Belt, One Road (OBOR) initiative, our own included, and with good reason; what might be described as the Marshall Plan on meth is far more significant than that.

The OBOR initiative is not just designed to boost Chinese trade, its cultural footprint, or even global prestige; if successful, it represents a hegemonic remaking of the world in the Middle Kingdom’s image.

In Pakistan, recently released details of the China-Pakistan Economic Corridor (CPEC), a critical component of OBOR, reveal that the level of commercial, industrial, agricultural, military, and cultural integration planned by Beijing is deeper than anyone had previously imagined.

The project’s 231-page Long Term Plan (LTP) outlines far more than the already-ambitious plot to connect Kashgar in western China with Pakistan’s Gwadar port on the Indian Ocean, a distance of 2,000km.

Drawn up by the China Development Bank (CDB) and the National Development Reform Commission (NDRC), the plan includes the construction of a national fiber-optic “backbone” for internet and broadband TV (in part to “disseminate Chinese culture”).

The installation of monitoring and surveillance systems in every major city from Peshawar to Karachi, as well as the creation of a vast series of industrial parks and special economic zones maintained by Chinese-backed firms have also been proposed.

In addition to its original purpose of creating a vast transportation network across the Hindu Kush and Indus River Delta down to the Indian Ocean, the initiative also envisages large-scale agricultural experiments across Pakistan, testing various seeds, fertilizers, and supply-chain methods for improving the country’s inefficient farm-to-market infrastructure.

Now valued at USD57 billion, the array of Chinese investment that will inundate Pakistan over the next 15 years has representatives of the latter in an ebullient mood. “Higher than the Himalayas, deeper than the ocean, stronger than steel, and sweeter than honey” is how relations with Beijing have been described in Pakistan on numerous occasions. This is a bond likely to grow stronger, if not sweeter, as further details of the deal emerge.

For the Chinese, of course, the deal appears to be win-win no-brainer: it gains not only a critical port on the Indian Ocean, but a lifeline for one of its poorest provinces (Xinjiang), a greatly enhanced relationship with a critical Muslim power, and, perhaps most importantly, a huge outlet for Chinese overcapacity for everything from cement, textiles, and fertilizer to state-backed loans from hundreds of Chinese state-owned enterprises.

To be sure, China risks three things: first, the alienation of India—already underway since Delhi declined to attend the May OBOR summit in Beijing; second, recouping neither its money nor its reputation should CPEC not deliver; and third, becoming bogged-down by costly but ineffective projects scattered across a notoriously volatile country.

What then are the specific upshots of CPEC in light of the new details?

The Fertilizer of Eternal Friendship

Somewhat surprisingly, CPEC’s single largest realm of investment outside transport is in agriculture. Convinced that 50% of all Pakistani produce goes to waste “due to lack of cold-chain logistics and processing facilities,” Chinese firms are heavily investing in virtually every aspect of Pakistan’s agricultural supply chain.

The Chinese state is also receiving 6,500 acres on which to develop high-yield seed and irrigation “demonstration projects,” mostly in the province of Punjab.

Chinese-backed local firms will also produce fertilizers, pesticides, vaccines, and feedstuffs, in addition to a three-tiered national warehousing network (purchase and storage, transit, and port) that will allow Pakistani produce to reach the market more efficiently.

No masterplan for regional integration would be complete without the requisite industrial blueprint, and China hasn’t skimped on its schemes to increase Pakistani productivity, both above and belowground.

Dividing the country into three industrial zones, western and northwestern (most of Balochistan and Khyber Pakhtunkhwa), central (Punjab), and south (Sindh), the plan calls mineral extraction in the first (gold, chromite, marble, and diamonds), textiles, household appliances, and cement in the second, and petrochemicals, iron and steel, engineering machinery, trade-processing, and auto and auto-part assembly in the third.

Eying Karachi and its environs for auto part assembly—a somewhat risky move given the current domination of the Pakistani automobile market by Japanese firms—CPEC also has its sights set on the corridor’s terminus at Gwadar near the Iranian border.

In addition to building up the port city’s iron, steel, and petrochemical industries, the plan sees Gwadar as key to the Balochistani and Afghan hinterlands, not to mention a critical import hub for Middle East crude that can then be piped along the CPEC to Xinjiang province, cutting some 4,600 nautical miles off the equivalent sea route through the Strait of Malacca. Gwadar will also serve as a shortcut for the import of iron ore and coking coal from South Africa and New Zealand.

The plan also lays particular emphasis on boosting the Pakistani textiles industry as a source of raw materials, especially yarn and coarse cloth, to “help soak up surplus labor forces in Kashgar” through value-added production. One forgets that a certain kind of Marxist still dictates much of Chinese policy.

Less publicized has been the huge priority the Chinese government has placed on fiber-optic connectivity between the two countries.

Seeking to relieve bottleneck pressure on the connectivity of its western provinces, China is also keen on diversifying the route its telecoms services take to Africa, all of which must currently run via Europe.

Pakistan also lacks a secure internet infrastructure, with only one landing station for the four submarine cables that handle all its traffic.

To relieve both parties, CPEC’s plan is to build an overland cable across the Khunjerab pass to Islamabad in the north, and a submarine landing station in Gwadar that links up with Sukkur in the south. The latter will then be connected by a “backbone” to Islamabad. Here Chinese media firms will establish a “cultural transmission carrier” designed, in theory, to “further enhance mutual understanding between the two peoples” through broadband dissemination.

In practice, it will likely have ears of its own.

CPEC also calls for the creation of so-called “safe cities,” an initiative which involves the deployment of explosive detectors and scanners to “cover major roads, case-prone areas, and crowded places…in urban areas to conduct real-time monitoring and 24-hour video recording,” before sending signals back to a command center.

After a pilot program scheduled for implementation in Peshawar, a city long troubled by political, ethnic, and religious-motivated violence, the “safe cities” surveillance project is then slated for extension into Lahore, Islamabad, and Karachi, among others.

“War made the state,” said Charles Tilly, “and the state made war,” but commerce breeds the connectivity that morphs into the ultimate control.

CPEC also calls for the construction of a beautified tourism belt along virtually all of Pakistan’s vast shoreline.

In so doing, the plan promises to help visitors experience “the natural, exciting, participatory, sultry, and tempting characteristics” of all that Pakistan has to offer.

Last but not least is the question of financing. Lest they gain a reputation as spineless spendthrifts—or simply drive their beneficiaries to wanton ways—Beijing must beware of how much it makes it rain. To keep the flood from washing the whole party down river, the IMF, World Bank, and Asian Development Bank warn that Pakistan cannot absorb much more than USD2 billion in FDI before the economy drowns in inflation.

But currency questions are also of the essence, given Pakistan’s infamous difficulty in garnering foreign exchange. To offset the weakness of the rupee, CPEC is tripling the swap mechanism between the RMB and the rupee to 30 billion Yuan, and diversifying power purchase payments from USD into a rupee/RMB basket.

In layman’s terms, CPEC will greatly enhance the importance of the RMB in the economy of what will soon be the world’s fifth most populous country.

Originally a transport corridor connecting the most isolated part of the Middle Kingdom to the Indian Ocean, CPEC has rapidly morphed into an all-encompassing economic, touristic, technological, and security-related monster-plan.

Whether it accomplishes these gargantuan tasks is almost a secondary issue; its failure to do so would speak for itself, along with the reputation of the world’s most dynamic economy and strategically ambitious rising power.

The importance of CPEC lies in the shape and scope of the undertaking—not merely the fact that it intends to “save” Pakistani agriculture from itself, but also monitor every major city in the process, all with the enthusiastic consent of the governed.

The dream of CPEC offers an unrivaled glimpse at what Chinese hegemony truly aspires to.

If the hallmarks of the American twentieth century were a global proclivity for Coca-Cola and the exclusion of communists from postwar Italian politics, the much-heralded and equally maligned Chinese century will be defined by the success of undertakings such as CPEC.