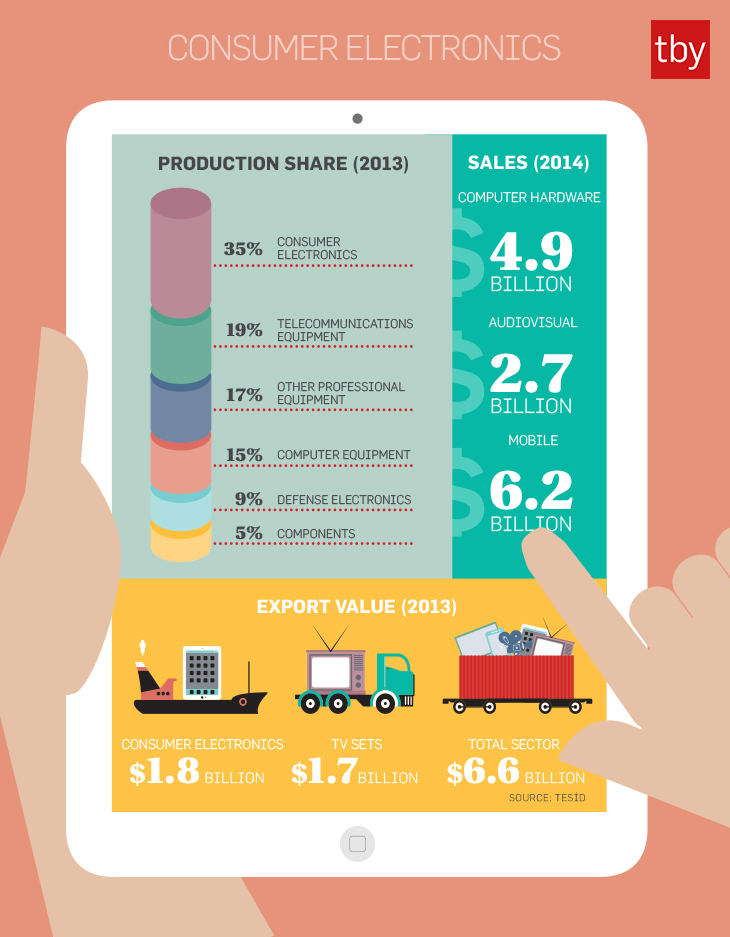 Share on:
Solid economic dynamics are assisting the growth of the consumer electronics industry in Turkey.

The performance of the Turkish electronics industry has been notably increasing with a broad range of high-quality products at competitive prices, continuous investments in R&D activities, and efficient after-sales services. And even though the current export values are not high on a global scale, it is expected that Turkish-made electronics will soon attain more significant market shares in foreign markets.

As technology and innovation gain more and more importance every year, the world’s electronics sector keeps on growing at an unprecedented rate. According to the Market Line Industry Profile, by 2017 the sector will reach the value of $381.6 billion worldwide, corresponding to an increase of 29.4% in comparison to 2012.
Turkey’s consumer electronics sector currently represents 2% of country’s total GDP and is considered to have great investment potential. This prodigious growth outlook comes as a result of global trends such as the convergence of broad-based income growth, declining electronics prices, constantly developing infrastructure, as well as augmented domestic production. The growth and advancement of Turkey’s consumer electronics industry is deeply embedded in the structure and success of country’s industrial revolution.
The industry began to develop rapidly in the second half of the 1980s, with the initiation of color TV broadcasting and the acceleration in telecommunications investments. Over the years, Turkey’s electronics industry has developed considerable capacity in two major subsectors; consumer electronics and telecommunications equipment. According to the Turkish Electronic Industrialists Association (TESİD), in 2012 the country’s total electronics industry production was $12.5 billion, with consumer electronics subsector having the largest share (34.8%), followed by telecommunications equipment (18.5%).

TV sets are by far the most significant product group in the Turkish consumer electronics subsector, with production reaching 11.6 million units in 2012. There are currently approximately 300 companies involved in the television-radio receivers and audiovisual equipment sectors, with the main factories located in Istanbul and Manisa. Noteworthy, Turkish-made TV sets enjoy an excellent reputation in the European market with respect to both, quality, and price. After many years of hard work and significant investments, Turkey’s consumer electronics subsector managed to achieve a 50% market share in the European market for CRT TV sets. Furthermore, in order to maintain the leading position, Turkey continues to undertake major investments in technologies such as application-specific integrated circuit-ASIC and LCD displays, and is expected to increase its current market share.

Thanks to intensive R&D efforts and production aligned with global trends, the exports of the Turkish electronics industry have demonstrated an upward trend since 1990. In 2013, the industry realized exports to nearly 200 countries, with the total value of exports reaching $6.6 billion. Turkish-made electronics are primarily directed to the European markets, with over 85% of consumer electronics exported to EU member states. As in production, consumer electronics and telecommunications equipment are the main export items.
The export value of the Turkish consumer electronics subsector reached $1.8 billion in 2013, with the most important products being TV sets ($ 1.7 billion in 2013), which were exported to more than 145 countries throughout the world, the main export destination being the EU (over 90% of total exports).