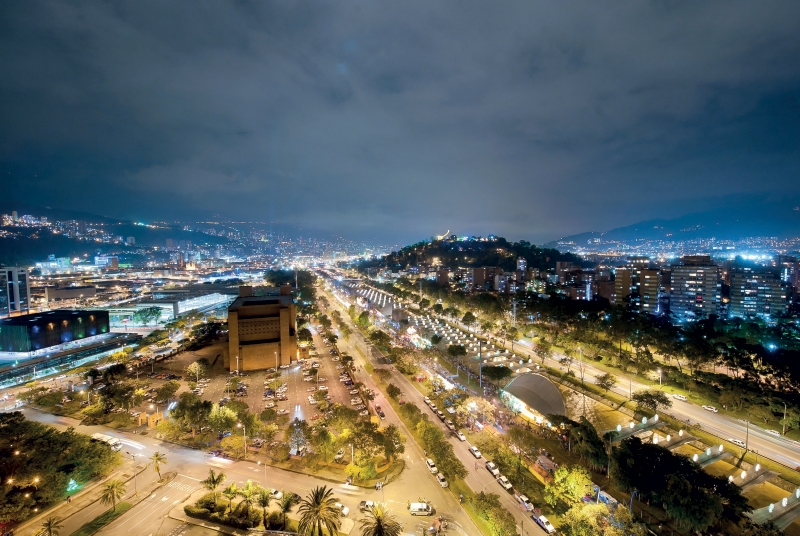 Share on:
INFRASTRUCTURE Colombia would have the potential to boost its GDP by over 1% were it to enhance its transport infrastructure, cementing its status as the region’s number three economy. So […]

Colombia would have the potential to boost its GDP by over 1% were it to enhance its transport infrastructure, cementing its status as the region’s number three economy. So said ratings agency S&P in a recent dedicated report. The report notes that free trade agreements (FTAs) with key markets of the US, China, and the EU would sustain Colombia’s 4.5% growth north of the 2.5% Latin American average for the next five years. The caveat, though, was that long-term economic growth depended upon better transport infrastructure and upping the pace of tendering and land rights disputes.

And the government has been listening; it launched a vast investment program, overseen by the new National Infrastructure Agency (ANI), and backed by construction legislation to oil the wheels. Indeed, between 3% and 6% of GDP is earmarked for infrastructure construction by 2016, compared to the current 1.5%. Newly re-elected in June 2013, President Santos’ commitment to his $50 billion transport infrastructure program by itself will add up to 1.5% to economic growth when implemented. Between 2011 and 2021 Colombia has penciled-in $50 billion in expenditure on infrastructure—including roads, railroad, maritime, ports, airports and urban. Colombian newspaper El Colombiano, meanwhile, estimates that in 2011 around 17% of the Ps108.7 billion pension funds invested in Colombia was invested in infrastructure.

Colombia is to boost port investment by 20% to $482 million, with 10 concessions awarded by end-2014. In 2015 the state is set to award the management, upgrade, operation and maintenance of Barranquilla, Neiva, Armenia, and Popayán airports. Meanwhile, the scheduled Bogotá subway project will feature an initial line of 34 kilometers in length with an estimated cost of approximately $2.5 billion. Implemented in two phases the first 20 kilometers of the project will feature 12 kilometers of underground line and 8 kilometers above ground running from the north-east of the city to downtown Bogotá.

In March of 2014, the government earmarked $8 billion for road infrastructure rehabilitation, which, again, will likely add 0.7% to GDP. BNAmericas reports that it has also programmed the awarding of 25 highway projects in 2014 within a $21 billion master plan. These schemes of historic scale include the 146 kilometer long Conexión Norte highway, budgeted at $500 million, Conexión Pací­fico 1, Rí­o Magdalena 2, and Conexión Pací­fico 3, at a cost of over $2.5 billion.

Subsequent road projects feature the Rí­o Magdalena 1, Autopista al Mar 1, and Autopista al Mar 2, likely awarded for around $2.66 billion. The Heavy Construction Cost Index (ICCP), which indicates the average percentage change in the prices of key inputs for the construction of highways and bridges—a guide to prospective project costs — registered at 2.1% for the full year of 2013 down dramatically from 8% in 2010.

Colombia’s infrastructure boom has also necessitated creative means of funding that combine state with entrepreneur. As Jose Luis Cabal Sanclemente, the General Manager of Constructora Meléndez said in a TBY interview, “PPPs are a great tool to promote the development of infrastructure projects, and work to boost activity in this segment making Colombia an even more competitive country within the framework of the several free trade agreements (FTAs) it has recently signed.” By 2016, the government plans to construct around 1 million new homes with a $40 billion price tag. “We have also seen a growing trend lately to implement PPPs within the housing segment to boost the development of such projects in municipalities across Colombia’s regions,” he added.

Meanwhile, commenting on the Mayor of Bogotá’s Plan de Ordenamiento Territorial (POT), aimed at transforming the city by addressing such issues as climate change, social segregation, and transportation, Carlos Álvarez told TBY that, “Legislation in effect since 2004 restricts the construction of buildings above eight to 10 stories. Now the mayor, Gustavo Petro, has proposed that commercial and office buildings be allowed to exceed those limits in certain special zones, and that developers pay significant additional taxes for every story above the regulation limits.” The potential taxes raised would fund Bogotá’s improvement of public services and social housing.

Colombia’s historically largest single construction project, the $6.47 billion Reficar refinery close to the coastal town of Cartagena, has faced industrial action over the employment of foreign skilled labor. Reficar is a wholly-owned unit of state-owned oil giant Ecopetrol. To put the scale of the project into perspective, the industrial dispute affected 12,000 directly and indirectly employed workers. Following the strike, Reficar upward-revised the estimated project cost from $3.5 billion to $6.47 billion, with completion delayed to end-2014. Meanwhile, the government has plans to sell a 9.9% stake in Ecopetrol to finance the infrastructure bonanza.

Since the global credit crunch Colombia has brought into being a tightly regulated construction sector with over 100 laws governing the rights of property developers and investors alike. In conversation with TBY Carlos Álvarez, General Manager of Constructora Coala explained that, “The economic crisis in 1998 created a robust fiduciary system that enables investors, developers, and end buyers to operate in a much safer, more secure, and less risky market.” He went on to state that while previously, constructors had put up an entire building to sell off, “…the fiduciary system today enables both the buyer and the project promoter to base the financing and completion of the building on a guaranteed volume of sales, supported by mortgages, so they don’t begin construction until those guarantees are in place.”

Colombia’s cement infrastructure features five ready-mix plants and 69 aggregates quarries. Cement consumption has reached a figure of 225 kilograms per capita per annum, while the average in Latin America is 330 kilograms. By World Cement reckoning Colombia produced approximately 11.3 million tons of grey cement in 2013, up 3% YoY. Domestic cement sales rose similarly by 3.5% YoY to 10.87 million tons. And 2014 looks strong too, with approximately 1.07 million tons of grey cement produced in May 2014, up 15.3% YoY. According to the National Administrative Department of Statistics (DANE), production volumes for January to May 2014 were 12.6% above the corresponding period of 2013, exceeding 4.9 million tons. Meanwhile, in the 12 months to May 2014, production rose 9.3% YoY to 11.8 million tons. The January to May period of 2014 saw 4.77 million tons of grey cement sold domestically, up 12.2% YoY. Meanwhile, cement export volume had risen 53% at year-end 2013 and 88% for 4Q2013 alone. Cementos Argos, Colombia’s largest cement outfit, which had bought cement and concrete businesses in Honduras and Florida, catering to the buoyant US market, posted a 51.7% rise in 1Q2014 net profit to $6.07 million. Its US cement sales rose 27%, and those in the Caribbean and Central America rose 27% in value and 11% in volume terms. Colombia’s number two cement player, CEMEX, describes its strong presence in the “Urban Triangle” of Bogotá, Medellí­n, and Cali—these areas alone consume 36% of the national cement total.

The Colombia Chamber of Construction (CAMACOL) has worked on a suitable urban plan, to embody the state’s green agenda, and develop Green Building Code (GBC). Aside from energy the savings, the investor-friendly plan is geared toward simplifying the obtaining of construction permits. Andrés Alvarado Ortiz, the Managing Partner at Abacus Real Estate, a founding member of the Colombian Sustainable Construction Council, told TBY that, “Sustainability is at the core of our business. The building and real estate business is one of the largest contributors to carbon emissions. The right way to approach real estate is to be aware of its impact on the environment. We are one of the leaders in green construction. We have built some of the first LEED-certified buildings in the country.” Colombia is undergoing nothing short of a construction revolution that, given a lasting peace deal, will stand the Andean nation’s infrastructure in robust stead for the long term.