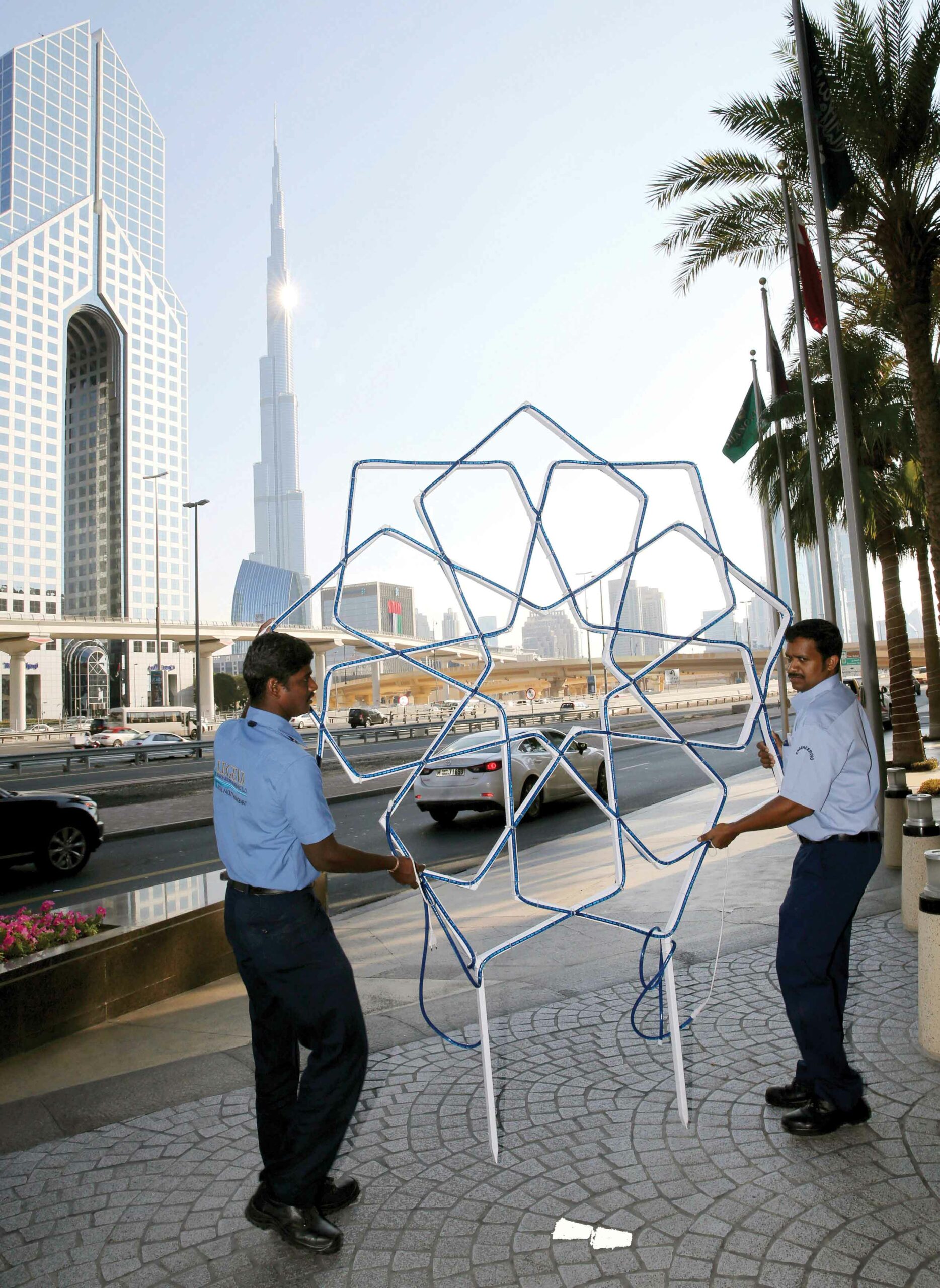 Share on:
Dubai's construction sector has weathered slow years and looks poised to begin growing again thanks to a new wave of large-scale projects linked to Expo 2020.

Dubai’s construction sector has long been an economic driver as the city has experienced some of the most explosive growth in the world. The boom periods over the past three decades have brought some truly staggering growth to what was once a small fishing village on the Arabian Gulf—at one point in 2006, one out of every four cranes in the world could be found in the city. The economic crises of 2008, followed by the recent drop in oil prices, sparked a series of compounding effects that have combined to slow the city’s economy and the growth of the sector. Still, there is a sense of optimism in the sector, largely due to Expo 2020 on the horizon and the increase in major projects it will bring.

The state of the sector has been uneven since the global financial crisis, which brought an abrupt end to several years of uninterrupted growth. The construction sector saw mixed performances in 2016, but industry participants believe the worst days are over for the sector. The total value of Dubai’s planned construction projects reached a high of USD390.7 billion in 2016, with USD53.5 billion of this related to projects in active construction. This is down slightly from 2015, but the slowed rate of decline is considered encouraging. Around 58% of projects in the execution and planning stages in 2016 were mixed-use facilities, with transport (14.6%) and residential (13.2%) the next two highest project categories. The increase in flows of credit to the sector showed increased investor confidence, with UAE lending up 14.8% in the first half of the year despite tightening in credit standards due to the fall in oil prices. After dropping to under USD32 billion in 1Q2012, the amount of credit delivered to the sector has grown in each of the past four years, rising to USD65.8 billion in 1Q2016.

The most promising sign of the recovering strength of the sector, however, was the increase in planned contracts. 1Q2016 saw USD6.6 billion of new contracts awarded, the highest figure since the peak of the construction boom in 2008, and the amount of new projects planned and breaking ground continued to accelerate through the end of the year. Seasonal trackers showed staffing levels and workloads rising to year-high levels at the end of the year; though marginal, the shift in the positive direction had industry participants optimistic about the direction the construction industry was heading at the end of 2016.

Overshadowing everything else in the sector is Expo 2020, which looms on the horizon as a source of hope for the industry. In 2013, Dubai was chosen to become the first MENA country to host the world’s fair, and government officials have pledged to make the event a transformational experience. Preparations for the fair are well underway thanks to the Dubai government’s plan to finish all construction more than a year in advance in order to ensure a well-run event. In conversations with construction industry participants, preparations for the Expo were on the minds of participants in every sector of the industry. With over USD27.2 billion to be awarded in contracts (20% allocated to SMEs), the spending for the Expo will touch every sector of the economy. The 2017 budget calls for a 3% increase in overall spending but a 27% rise in construction expenditures, as Dubai prepares for the Expo by strengthening its preexisting infrastructure platforms as well as building new facilities. Construction at the USD353 billion Expo 2020 site in Dubai South formally began in September 2013. The first work on the 4.38sqkm site involved constructing the Expo Village’s 2,100 residential units. Additional infrastructure work is expected to begin shortly, followed by the construction of transportation infrastructure and a surface road network in late 2017. The end goal is for all infrastructure work to be completed more than a year in advance of the opening of the Expo in October 2020.

One of the most important infrastructure improvements planned for Expo 2020 is a USD2.9 billion extension to the Dubai Metro. In order to handle the Expo’s estimated 25 million visitors, Route 2020, a 15km section of the red line that will extend from Nakheel Harbour to the Expo site, is scheduled to open in May 2020 and carry 35,000 Expo visitors a day during the week and 47,000 per day on weekends. Its seven stations include three serving Discovery Gardens and one each at Dubai Investments park and Golf City. In June 2016, Dubai’s government signed a contract with a consortium of French, Spanish, and Turkish firms to begin construction. As with many other planned infrastructure projects, the benefits of the metro are planned to last beyond the life of the Expo. After the Expo ends, the line is expected to be extended an additional 6km to reach Al Maktoum International Airport. With an expected volume of 46,000 riders per hour in both directions, the arrival of the mass transit system should be a welcome source of efficiency for what is expected to become one of the world’s busiest airports. In this regard, it is being welcomed by both contractors and residents alike as a project that will benefit all sectors of Dubai’s population. The road and transport agency has stressed the need to bring the route through developed areas to make as much of an impact as possible in for the city’s residents.
And Al Maktoum International is undergoing changes of its own. Dubai’s rapid growth has put considerable pressure on Dubai International, which has become one of the busiest passenger airports in the world. In 2016, Dubai International saw more than 83 million passengers pass through, making it the busiest international airport in the world and putting it behind only Beijing and Atlanta for total passengers. It is expected to hit its capacity of 90 million by 20 million, limiting the city’s tourism and business potential unless Al Maktoum can help pick up the slack. Al Maktoum has grown considerably since opening in 2013, and saw more than 850,000 passengers pass through the airport, almost double its 2015 total of 461,000. Recognizing the importance of establishing a second air traffic hub, Dubai’s government has launched an ambitious project to grow Al Maktoum’s annual capacity from its current 5 million passengers to 220 million passengers by 2025, making it the biggest airport in the world. The first phase, the largest airport construction project in world history, will bring Al Maktoum’s capacity up to 130 million passengers a year by 2022. The expansion will also allow the airport to triple its cargo capacity from 4 million to 12 million tons a year. At more than USD27.2 billion over the life of the expansion, the project will be primarily financed by debt, and a number of French, Italian, and UAE firms are already well underway working on new terminal facilities, runways, roads, and transportation facilities, with the first stage expected to be completed within two years. The airport will also serve as a keystone for further development of the Dubai South region.

While all this construction is underway, Dubai will be taking care to incorporate new green building standards into its projects. One of the sub-themes of Expo 2020 is sustainability, and in keeping with this theme industry, participants have been taking new steps to ensure that the city’s long-term environmental health remains strong. Dubai’s Green Building Regulations and Specifications went into effect in 2012 for public buildings and in 2014 for private commercial ones. The regulations merge international standards with Dubai-specific elements to produce facilities that limit water and electricity consumption. Since 2012, more than 1,400 green building projects have been completed, with an additional 120 million sqft of real estate registered with the city for green construction. In 2016, Dubai’s government took its green certification program an additional step by launching the Al Safat green building rating system. The rating calls for platinum, gold, silver, and bronze classifications, and all upcoming construction must at a minimum meet bronze certification. More than 90% of buildings constructed after 2001 already meet the bronze certification levels, but by standardizing the system and urging developers to meet higher standards the Dubai government anticipates carbon dioxide reductions of 20%—an effect equal to planting 36 million trees over the next five years.

The construction industry has responded well to these new regulations, recognizing the need for such standards and finding new potential in large-scale environmental projects. The Mohammed bin Rashid Al Maktoum solar park is one such example of new construction created by the city’s shift toward green technologies. First proposed in 2008, the USD2 billion project has completed two phases and now produces enough energy to power 50,00 Dubai homes. The plant is the world’s cheapest operating solar plant, and further price decreases are expected due to the falling price of photovoltaic panels. Construction began on the third phase of the mark in early 2017, with an expected completion date of 2020, and a tender for the fourth phase is expected to be issued shortly. Industry leaders expect projects like these to continue to emerge as the government looks for new sources of energy and industry to support the ever-growing city. The alignment of industry and social goals means that the sector appears ready to play a key role in the construction of Dubai’s future for years to come.