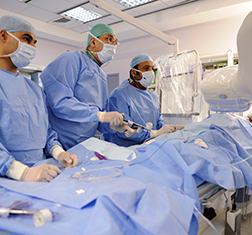 Share on:
Kuwait is in the midst of a total health sector overhaul. The government is looking for ways to save money on its extensive healthcare program and to promote the quality of care available in the country.

The healthcare sector in Kuwait has long been a robust one, and, now that the government is embarking on a post-oil economic transformation, the sector is set to see a score of reforms and initiatives of its own. A defining characteristic of Kuwait and its healthcare demographic is the exceptionally high number of expatriates living in the country; of the country’s population of roughly 3.7 million, more than 2 million are non-Kuwaitis, or about two-thirds, primarily from India, Pakistan, Bangladesh, the Philippines, Egypt, and Syria.

The increased privatization of healthcare in Kuwait is a key aspect of the more than USD100 billion Kuwait Development Plan. The overhaul intends to reduce the price tag for the government, as well as place an emphasis on specialized treatment to dissuade locals from going abroad for healthcare.
Under the current scheme, nationals are able to receive healthcare free of cost at any public healthcare institution, while non-nationals must pay an annual fee of USD165 per person, in addition to surcharges for selected treatments and procedures. Proposed changes would prevent non-Kuwaitis from receiving care at such state hospitals, while new hospitals and polyclinics would be built specifically to cater to expats. In order to successfully achieve this, the government has created the Kuwait Health Assurance Company, a new megaproject equipped with some KWD230 million and tasked with building three new hospitals and 16 primary medical centers, which, together, will have the capacity to serve over 2 million expatriates in Kuwait under the new government insurance program.

Addressing the changing demands of Kuwaiti nationals, the government is set to roll out a new insurance scheme with private companies at the forefront, starting by providing private health insurance to the retired. Currently, Kuwaitis have the option of buying private healthcare and thus going to privately operated health facilities.

The Ministry of Health has plans to spend USD1 billion to build eight new hospitals and conduct hospital renovations or expansions, while the Ministry of Public Works has also earmarked over USD4 billion to construct nine additional hospitals, which together are set to increase the number of available beds at public facilities by approximately 3,334, in addition to providing some 15,000 jobs.

Many of the country’s most common health issues have been wrought on by lifestyle choices and are namely obesity, diabetes, and hypertension. It has long been a standard practice for many Kuwaitis to leave the country and seek medical treatment for serious diseases abroad. Combating this is a key aspect of the government’s healthcare sector overhaul. New policies created by the Ministry of Health specifically in response to the high rates of outbound medical tourism have already shown positive results. Since the ministry set out to increase the standards of Kuwaiti medical facilities, it reports that the number of locals traveling abroad for treatment has reduced by more than 50%.

With more nationals receiving treatment in Kuwaiti hospitals, not only does their reputation increase, but more money is kept in government coffers—and reduced spending is high on the government’s list of priorities, given the budget deficit hit USD15 billion in 2015, attributable to the global slump in oil prices. According to the IMF, the country will need some USD116 billion through the coming six years in order to finance the deficit. With the government seeking to pay less for outbound medical tourism, new regulations supported by the Minister of Health would make it more difficult for patients to go abroad for treatment by requiring hospitals to make applications for treating a patient outside of the country, as well as stipulating that the Supreme Commission for Overseas Treatment, not the patient’s hospital, has the final approval in the patient’s case. Patients will be allowed an appeal, but only once.

The reason for many Kuwaitis traveling abroad is a lack of trust in the government administered healthcare system. As a result, private healthcare providers have seen a steady increase in customers. Among the score of new hospitals the government is financing, at least one is expected to be handed over to the private sector, with more government hospitals following suit if it proves successful. These hospitals will likely be managed by foreign, well-established healthcare companies.

Expected to open this year is the Al Ahmad Al Jaber Al Sabah hospital, the largest hospital in Kuwait and the region and one of the largest in the world. While the Ministry of Health is currently managing the hospital, plans are to fully hand the site over to a practiced hospital management company to operate the facility’s more than 1,160 beds, trauma center, diagnostic and treatment services, dentistry division, and in and out patient services.

Demand for pharmaceuticals in the country has been on the rise in recent years, making Kuwait a prime location for multinational pharmaceutical companies to enter. BMI Research’s Pharmaceutical Risk/Reward Index gave Kuwait a score of 53.3 out of 100 for the first quarter of 2017, a slight decrease from the fourth quarter of 2016, when it earned 53.4. Following the decimal decrease, the country is now ranked after the UAE, Saudi Arabia, and Israel, making it only the fourth-most attractive market. The report suggests that diabetes and other diseases caused by a sedentary lifestyle that locals are increasingly adopting will lead to increased expenditures on diabetes-related products. Thus, the opportunities in the country for multinational pharmaceutical companies will only increase.