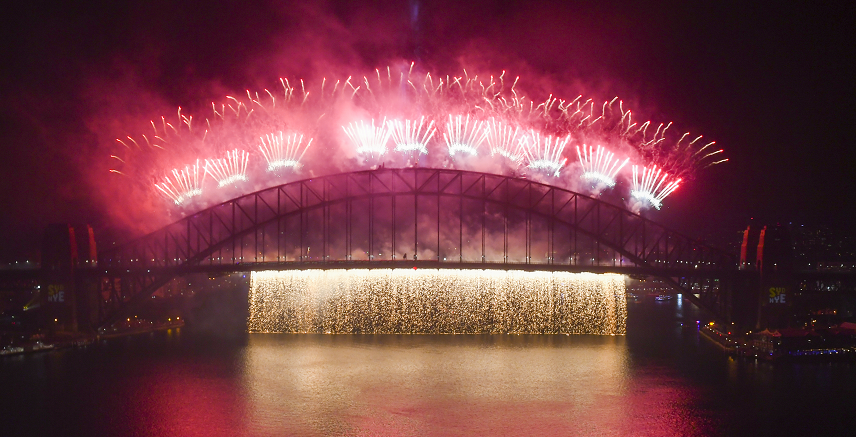 Bizarre Traditions Around the World

Share on:
From grape-eating to divination and time travel, here are some of the strangest New Year celebrations from around the world.

Not everyone celebrates the New Year in the same way. Check out these unusual traditions before you make plans for ringing in 2021!

An ancient New Year’s Eve tradition found in Germany, Austria, and Switzerland, and also observed in Finland, Bosnia, and Turkey at other times of the year, has the catchy name of Molybdomancy, which is actually a form of divination based on interpreting the shapes of molten lead.

Known as BleigieíŸen in German, the practice is defined by melting a piece of lead on a spoon and then dropping the lead in cold water for it to resolidify.

People then try to predict what the new year will bring by observing the shapes made by the lead, with round shapes signifying luck and the shape of a crown signifying wealth, for instance.

Another place where round shapes are relevant on New Year’s Eve is the Philippines, where people try to wear as many round things and carry as many round objects as possible as they believe these will bring them wealth in the coming year.

In Denmark, people like to throw dishes and china at the front doors of friends and family on the last night of the year as a demonstration of affection. This rather violent act of love became a sort of measurement of social success in a way, as the more dishes shatter on your door, the more friends you have.

In warmer parts of the world, particularly in South America, there are also a few unusual celebrations. In Ecuador, locals like to burn a figure of a scarecrow as a way to burn the bad things of the past and have a clean start for the new year.

Across Central and South America, many countries uphold the tradition of wearing colorful underwear on the eve of the passing of the year as a way to ensure good fortune in the future. Each color has a different meaning and thus inspires different outcomes.

Back in Europe, Italy offers two curious traditions. Venice has its midnight kiss tradition, where people exchange this sign of affection at the stroke of midnight. In Naples, the New Year’s Eve tradition carries more risks, with people throwing old furniture from their balconies onto the street to celebrate the coming of the new year, a practice that is also seen in Johannesburg, South Africa.

In Japan, monasteries ring bells 108 times in the run-up to midnight to drive away the temptations of man, while in Spain, people eat 12 grapes, one for each month of the year, to wish good fortune. This tradition is also observed in neighboring Portugal, with the difference that the Portuguese eat raisins rather than grapes.

The Scots care about who is the first to cross through your door in the new year, preferring a brown haired man carrying gifts than a blonde one, which is supposed to have something to do with ancient viking raids in the region in ancient times.

In Romania, on the other hand, having a bear crossing your door is an omen of good luck, and people dress up in animal furs and masks, dance together, and, one would imagine, visit each other for good luck.Finally, there is the US obsession with dropping things from great heights. There is a ball drop in Times square, New York, a potato drop in Idaho, an acorn and a pickle in North Carolina, a carp in Wisconsin, and a boot in Arizona.

Here at TBY, our favourite NYE idea, which is technically not a tradition but totally should be, would be to celebrate the first New Year’s Eve in the world on the Pacific Island of Samoa, and continuing the party on the 8.5 hour car-ferry ride to the island of American Samoa, crossing the international date line and effectively travelling 26 hours to the past where you can proceed to celebrate the last New Year’s Eve in the world all over again. That would be one to remember.