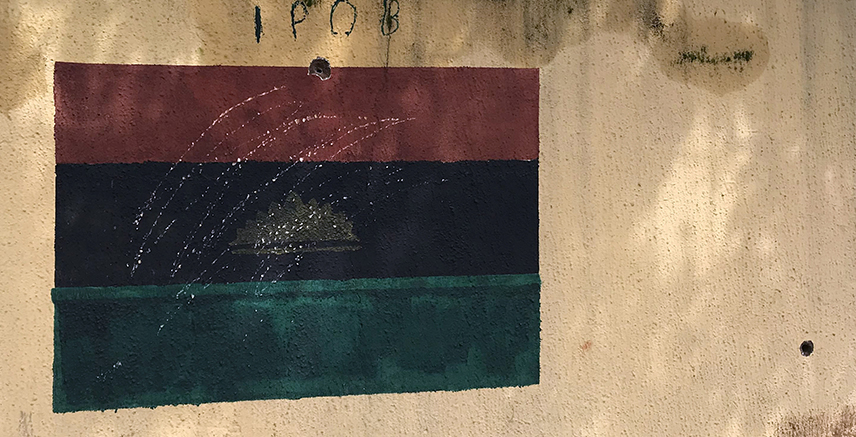 Share on:
The Nigerian region of Biafra sees rising tensions almost 50 years after the end of the war.

A wall at the family home of Indigenous People of Biafra (IPOB) separatist leader Nnamdi Kanu features a painted flag of the former Republic of Biafra and holes purportedly caused by bullets, in the city of Umuahia, southeastern Nigeria September 27, 2017. Picture taken September 27, 2017. REUTERS/Alexis Akwagyiram

47 years after the end of the Biafra war, also known as the Nigerian civil war, a post-war generation is once again demanding more rights and autonomy from the Nigerian government. The conflict that occurred between 1967 and 1970 is estimated to have killed almost a million people, displaced over 2 million, and created over half a million refugees, according to low estimates.

The Igbo people, of the Southeast of Nigeria, represent the third biggest ethnic group in the country, but have long felt oppressed and discriminated against by their compatriots from the north of the country.

The brutality of the war, marked by many massacres, including the Asaba massacre that saw 700 Igbos being slaughtered in two days in 1967, left deep scars in the minds of the people. From a macro point of view, it was successful in restraining separatist ideas. However, that now seems to be changing.

For months now, the Indigenous People of Biafra (IPOB) movement has gained traction in its demands for independence, and the Nigerian central government is not pleased.

President Buhari has put out a strong message that the integrity of the Nigerian nation is “not negotiable.”

The hand of the military has been equally strong. The IPOB has been declared a terrorist group, and consecutive military raids have produced a number of deaths in recent months.

An operation dubbed Python Dance II, in September 2016, reportedly killed 28 people when it raided the estate of IPOB’s leader, Nnamdi Kanu, who has not been seen since.

In October, new clashes between the IPOB and the army left another four dead. The message from Abuja is loud and clear: do not even think about rebellion, or else.

In contrast to his predecessors, however, President Buhari has been taking a dual approach: aggression and reconciliation.

In October, the Nigerian government agreed to compensate nearly 700 people for the effects of the war.

The victims, identified by government experts, will receive USD139 million in compensation, and another USD105 million will be disbursed to dispose of abandoned bombs that lay in place since the war.

The compensation follows a court case open against the state of Nigeria in 2012 by victims of bombs and mines in the Biafra region. It is the first time, in a long time, that the Igbo have had any sign that the government would be willing to assume any responsibility for what had happened.

While it represents an important step toward easing tensions, it will not change the fact that the region has not seen any benefits from Nigeria’s extensive oil revenues over the last four decades, or that Mr. Buhari is largely unpopular in the region.

It does not help that upon his election he reportedly stated that regions where 5% of the population voted for him (like the Southeast) could hardly expect the same treatment as those where he gathered 97% of the votes.
The soft carrot and hard stick strategy is unlikely to appease the Igbo for long, particularly as the government seems to insist on treating every Igbo ethnic person as a member of the the IPOB.

In a recent development in early November, Buhari has declared that police forces should arrest any individual suspect of supporting a separatist movement, including members of the Movement for the Actualization of the Sovereign State of Biafra, the IPOB and the Biafra Youth League (BYL), a movement that announced the start of grassroots referendum activities on November 6, aiming at promoting a separatist vote.

The BYL has also demanded action from the United Nations before the situation escalates further.

These are tense times for Nigeria, which continues to battle with economic challenges due to the low price of oil, security threats in the Niger Delta region, as well as the Boko Haram terror movement in the north.