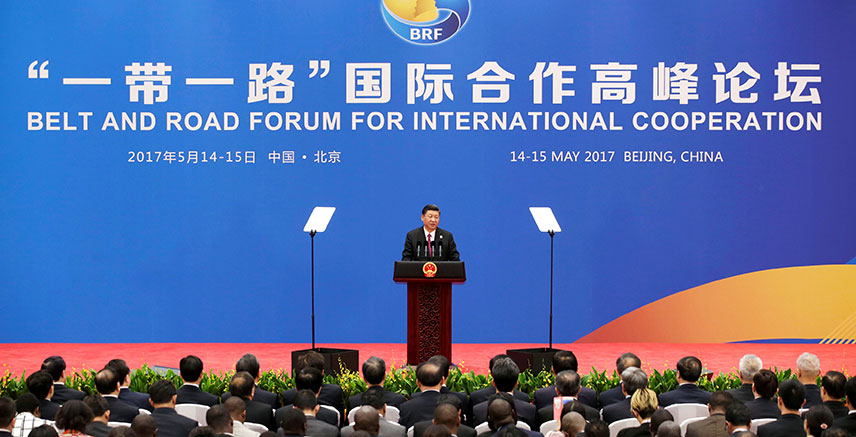 What we learned from the OBOR Forum

Share on:
At the close of the Belt and Road Forum, Chinese officials reinforce their commitment to the project with an all-inclusive tone.

Chinese President Xi Jinping attends a news conference at the end of the Belt and Road Forum in Beijing.

President Xi Jinping has pledged another USD124 billion in investment for China’s transformation of global trade. At the gala dinner on Sunday, the sight of Presidents Xi, Putin, and Duterte walking side-by-side hinted at China’s geopolitical aspirations.

It seems now that little can stop the Chinese-backed One Belt One Road Initiative. On Sunday, May 14, the first day of the two-day BRF in Beijing, President Xi and 29 other heads of state joined together to express their commitment to fighting protectionist trade practice and policy, and to promote economic integration through what could be the most ambitious global trade strategy in human history.

The establishment of a common groundwork among the 65 nations currently members of the OBOR, the introduction of a non-discriminatory trading system through the World Trade Organization (WTO), and the promulgation of open border policies for trade together form the basis of the joint communique.

A clear statement acknowledging the impending challenge of climate change was also included in the document.

The integration has yielded promising results already. Since its launch in 2013, trade between the member states has already surpassed USD3 trillion, with China alone investing more than USD50 billion.

And through the USD100 billion channelled through the Asian Infrastructure Investment Bank (AIIB), and another USD890 billion earmarked for over 900 development projects by the China Development Bank (CDB), the tentacles of OBOR are reaching far and wide.

Over the past three years, under the banner of the initiative, China has established 56 special economic zones in 20 different countries, potentially creating 180,000 jobs and yielding USD1.1 billion in tax revenues, according to President Xi. As it stands, the 65 countries holding membership status in the initiative account for 60% of the world’s population and around 33% of the planet’s gross domestic product.

The grid of ports, railways, roads, power generation plants, transmission lines, and industrial hubs will connect China with Eastern Europe, Southeast Asia, and the Middle East, all in one continuous free trade corridor.

With each passing week, China’s rhetoric regarding international trade contrasts more acutely with President Donald Trump’s “America First” policies. So far, this has kept the US away from any intervention regarding China’s OBOR initiative.

And over recent weeks, the rhetoric once present in President Trump’s speeches has dissipated. China as currency manipulator, as promoter of unfair trade relations, these are accusations that are no longer present in his speeches.

This change in approach culminated in last week’s bilateral trade deal between the US and China. It also resulted in US officials indicating that official representation would be present at BRF.

Under this deal, a deadline for China to accept exports of North American beef was laid down. This has opened the market for US companies to underwrite financial bonds and offer electronic service payment services.

On the other side of the deal, Chinese companies will now be able to export cooked poultry to the US.

A statement suggesting that China would eventually be able to purchase North American LNG was also included. While other relevant topics remain to be discussed, the move shows a clear shift in Trump’s policy toward China, and an acknowledgement on the part of the US of the relevance of OBOR as a global initiative.

Over a series of articles TBY is covering the different aspects of the complex OBOR initiative to give you a clearer view of what it means for global commerce in the future.