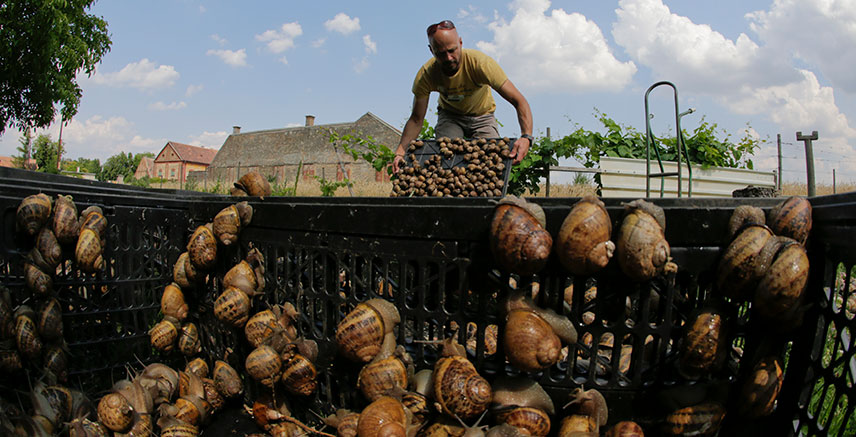 Share on:
A delicacy in some parts of the world, the taste of snails has remained relatively unknown to Azerbaijani palates over the years.

Azerbaijani farmers are looking into snail farming, as already practiced in countries such as Austria and France.

Perhaps not the most appealing type of food to many, snails have been enjoyed as a delicacy at least since Roman times, a tradition that remains in some modern-day Mediterranean countries and large parts of North Africa. Today, due to it being rich in protein, iron, and Omega-3, these homely creatures are being seen as a new type of super food and their market value has been on the rise.

This trend has resulted in the emergence of a smattering of ventures across the world, with Azerbaijan joining the club of snail-exporting countries, alongside places like China, Cuba, Italy, Nigeria, and Vietnam.

The new Azerbaijani company, Azdelikates-Alfa, has arranged for snail collection to take place in 30 separate villages in the Shamakhi district, with a centralized collection and processing point in Shamakhi city, located 106km away from Baku, in central Azerbaijan.

The snails are then starved to empty their stomachs, boiled to help separate them from the shell, and then processed for packaging and export. The snail meat is stored at a temperature of -18 degrees. The venture pays each villager EUR0.30 per kilogram of snails, and the business has reportedly tempted workers who had left for Baku to return to their villages to work on collection.

As the demand for snail meat grows, with new health-conscious consumers now joining traditional snail connoisseurs, prices in the international market have been going up, making the sector particularly profitable within the overall agricultural industry.

Market value ranges widely from breed to breed, but the common garden snail can sell in the UK for GBP8/kg, while sales to restaurants can return GBP10 to GBP12/kg. Some breeds, like the Archachatina Marginata, also known as the Giant African land snail, which can grow up to 30cm and is native to West Africa, is known to sell for up to USD50 per kilogram in North American markets.

Although reliable statistics are lacking for the industry, some sources suggest that, globally, the snail industry represents more than USD12 billion, with 450,000 tons consumed per year. While a part of this comes from developed snail breeding units in Western countries, the greater majority of the production comes from the collection of snails in the wild in developing countries.

Profitability emerges not only from the low cost of the animal, low maintenance, and low cost of feed, but also from snails’ rate of reproduction. As hermaphrodites, snails reproduce easily throughout the year, sometimes laying over 100 eggs at a time. Also, wild snails are easier to collect after rainy days, and so supply is more abundant during the rainy season, while global demand remains steady. Snail farmers can thus take advantage of supply and demand balance variations to strike more profitable deals in moments of low supply. High-end restaurants in France, for instance, where more than half a billion snails are eaten every year, will likely pay a premium for steady access to a quality stream of snails in times of low supply.

According to local sources, the Azeri operation exporting snails from Azerbaijan was established in February 2017 and had, by mid-may, collected 183 tons of snails. It expects to collect 100 tons more by the end of the year.