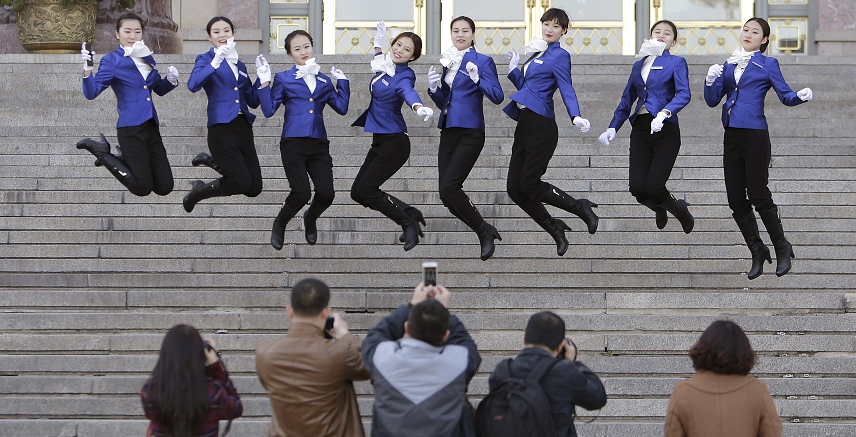 Asia on the Move

Share on:
While the lure of the East still draws foreign visitors to Asia, a rising middle class in parts of Asia is disrupting tourism dynamics.

Hotel guides (top) jump as they pose for photographs on the stairs during the closing session of the Chinese People’s Political Consultative Conference (CPPCC) outside the Great Hall of the People, in Beijing

In 2019, Asia’s emerging middle class is now in a position to earmark more money for traveling and leisure activities than ever before.

Up to 25% of outbound tourism globally comes from the Asia-Pacific region.

With the exception of places such as Japan, Hong Kong, Singapore, and South Korea, which are among the most expensive destinations on the planet, traveling in Asia is still by-and-large affordable, which makes it more attractive to the common man and woman.

There was a time that traveling to Asia meant visiting the great colonial cities such as Mumbai or Shanghai.

Later on, tropical destinations such as Bali in Indonesia and places in Thailand began to lure fun-loving travelers, while India became a magnet for spiritually-minded souls in search of enlightenment.

But, Asia is truly vast and home to more ethnicities, languages, and ways of life than one can imagine. It still has fresh experiences to offer in an age when many world-class destinations have turned into commercialized tourist traps.

In recent years, an increasing number of emerging economies across Asia have come to see tourism as their gateway to true development and rebranding.

In the ASEAN region, the Philippines seems to be ahead of the pack in terms of growth rate, though Thailand, Malaysia, and Singapore still receive the highest numbers of visitors.

Other rising Asian destinations include Cambodia, Laos, and Sri Lanka—about which we will definitely hear more in 2019 and 2020.

Extended stays as a (sort of) local

No traveler likes to be called a “tourist.”

People prefer to fancy themselves as modern-day adventurers and explorers rather than customers of week-long travel packages with airport transfer and a local guide.

An increasing number of travelers now choose to stay in Asia for longer periods, so as to gain an insider’s understanding of another lifestyle while mingling with the locals and even having a stab at learning the local language.

Thailand, Vietnam, and the Philippines are some of the most popular Asian destinations for this particular brand of tourism, as there is already a history of foreigners staying in these countries.

Traveling like a local, however, can be at times challenging.

And a month or two is likely not enough for a foreigner to get a full grasp of the intricacies of Asian cultures and make sense of things like a local.

So-called “bleisure” travel has been one of the industry’s buzzwords for almost a decade now.

But the idea of mixing business trips with leisure activities has taken hold in Asia as well.

The coinage of the term “bleisure” may have been rather unnecessary, as corporate travelers going abroad to attend conventions, meet local clients, or negotiate agreements have always tried to make the best of their time.

Who could say no to a little upscale fun at the end of a long, hard business day?

According to the Economist Intelligence Unit, Singapore, Sydney, and Hong Kong are among the most differentiated destinations for bleisure travel in Asia Pacific—which is not surprising given these cities’ world-famous business ecosystems as well as their luxurious offerings.

The complex nature of professional life today is putting extra pressure on individuals, threatening their physical and mental health, and traveling is a healthy way to get rid of some work stress.

A generation or two ago, traveling generally meant more tobacco and alcohol consumption than usual, but the millennial fondness for these vices does not seem to be as great as their parents and grandparents, according to several studies.

Many millennials and also older tourists are making room for sporting events and health-related activities in their itinerary.
And there is no shortage of healthy activities in Asia.

Wellness tourism, with a global market of USD639 billion, is growing at twice the pace of mainstream tourism, says the Global Wellness Institute (GWI).

Australia is currently Asia Pacific’s greatest wellness tourism destination thanks to its high living standards, well-protected nature, and clean environment, though China, Thailand, Japan, and Korea are also trying to claim their share in this market by capitalizing on their traditions of meditation, yoga, and massage.

All that said, tourism also exacts a price on host countries. Tourism is a water-intensive industry, and visitors often leave an irreversible impact on the very attractions that they came to visit.

Therefore, sustainable tourism needs to be taken more seriously in Asia, especially as the continent is home to almost 4.5 billion souls; the impact of new tourism trends in such a gigantic continent will make a mark not only on Asia but on the entire planet.