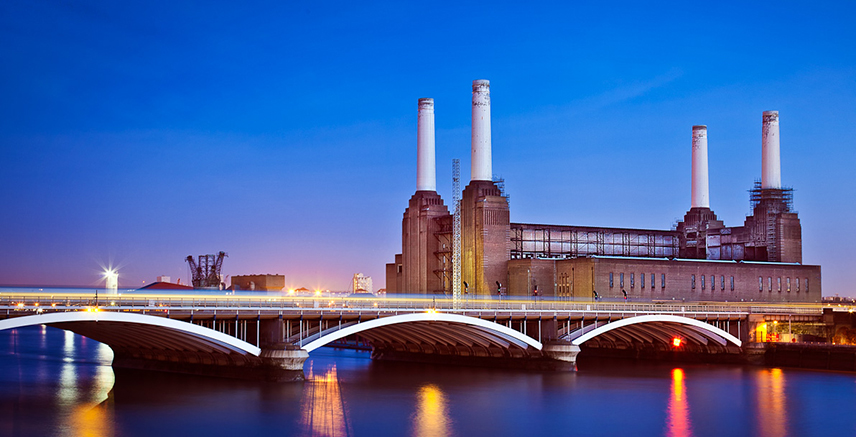 Another Brick in the Wall

Share on:
One of London's most recognizable landmarks is undergoing a rebirth thanks to the growing ambition of Malaysian investors.

The Battersea Power Station has long cast an iconic specter over London’s haphazard skyline, evoking a past age of laborious industrialization and issuing a portentous challenge to thirsty developers. Forever etched on the public consciousness by Pink Floyd’s flying pigs, the Thameside totems’ symbolism has now shifted to the 21st century’s onward march and a grand realization of Malaysia’s promised ambition. In 2012, a three-member Malaysian consortium bought the site and, since then, has wasted no time in advancing an ambitious redevelopment plan that will phase in a burgeoning residential and retail complex worth a projected £8 billion.
That Phase I is firmly in motion, with confidence high and ethereal apartments already sold, is no small feat. The incredible financial and creative potential of the site has proved at once a mirage and a quagmire for a long list of developers who, having arrived amid uproarious fanfare, departed silently while the four concrete towers lingered defiantly on. Developers from Ireland to Hong Kong have struggled with this stubborn child of another aeon, which, since being decommissioned in 1982, has lived a series of imaginary lives as a theme park, museum, luxury housing development, and football stadium.

With a 49ha space to consummate, almost 4,000 new homes are expected to be built, ranging from affordable housing to multimillion dollar penthouses. Around 25ha will be devoted to public space, a further six to a riverside park, whilst a shopping complex, offices, expansion of the Northern underground line, and regeneration of the power plant itself will account for the consortium’s $950 million refinancing loan arranged with a group of international banks led by CIMB, with OCBC, Standard Chartered and Malayan Banking as joint mandated arrangers.
After just two years, $2.5 billion of the development has been snapped up, with an estimated 60% going to British buyers while Malaysian purchasers account for under 15%. Divided into a series of long-term phases, construction work on Phase I began in mid 2013 and will see the development of 866 apartments, townhouses and penthouses, two offices, shops, and leisure and hospitality areas. Phase II will accentuate restoration of the iconic chimneys, resurrected brick by brick to their original specifications, and the refurbishment of the power station itself. Late 2014 saw the well-publicized announcement of Phase III, which will see the creation of plush pedestrian high street The Electric Boulevard. Acting as the main gateway to the development, the shopping hub will connect the underground extension with the power station itself. Over 1,000 new homes, a hotel, and leisure facilities will also be constructed during this phase, which is expected to be complete by 2020.

For the former colony turned aggressive investor, the BPS development is the icing on the cake in Malaysia’s forthright entrance into the UK property market. Focused primarily on London offices and redevelopment projects, Malaysia spent more, at $2.6 billion, than any other Asian state in the city in 2012. Subsequent investments and ongoing projects have seen Tan Sri Liew Kee Sin, driver of the Battersea project, launch a further multibillion dollar property development in the heart of the city.

The thriving partnership has been replete with heavy symbolism and spectacle, signaling a paradigmatic shift in the essence of the nations’ relationship. During a six-day tour of the city, Malaysian Prime Minister Najib bin Tun Haji Abdul Razak held a series of bilateral meetings with his UK counterpart David Cameron, in which the two leaders pledged cooperation on a number of economic and regional issues, an enhancement of mutual defense policy among them.

With London Mayor Boris Johnson, the Prime Minister jointly unveiled the design for “Malaysia Square,” which will form a prominent two-level canyon and centerpiece of the entire development. Billed as Malaysia’s eternal contribution to the metropolis, the square is perhaps the most emblematic manifestation of the nation’s expanding global influence. Malaysia hopes to join the family of developed nations by 2020 and, while a challenging set of domestic issues might be perceived as the chief impediment, on the international front the ambitious newcomer is building an eye-opening, if not mind-bending, testament to its future.