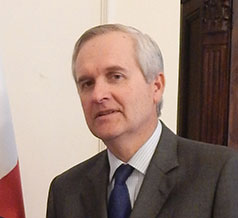 Share on:
“We have been able to conduct public bidding on all the major infrastructure programs that we want to go ahead with.“

How would you assess the domestic legacy of the Summit of the Americas which took place in Panama in 2015?

From a diplomatic standpoint, this government under the leadership of President Varela and Vice President and Foreign Minister Isabel Saint Malo has been able to achieve a balanced foreign policy contrary to what happened in the last part of Martinelli’s tenure. Nowadays, we have excellent relations with every country in the Americas, including those in the Bolivarian Pact. We have good relations with Venezuela, Cuba, Ecuador and, of course, great relations with those of the Pacific Alliance such as Chile, Peru, Colombia, and Mexico. We also have observer status in the Pacific Alliance and are considering whether to participate as a member. In this scenario, Panama has been able to act in the different multilateral entities in Latin America as a facilitator and a bridge for dialogue among different parties. President Varela has had exceptional relations with almost all of the presidents in the region, especially the US, which will continue under the Trump administration.

What has to be done to become part of the Pacific Alliance?

First of all, we have to decide if we want to enter the Pacific Alliance, a decision our Foreign Relations Ministry and the Ministry of Commerce and Finance are considering. They will have to submit a recommendation to the cabinet, which will probably happen in the first half of 2017. We will have to check the steps that have to be taken for Panama to form part of the Alliance, which is a commercial alliance that also has economic and political components that will have to be put into balance. Once decided upon, we will have to meet the required criteria. One thing that is needed is to have a commercial treaty with all of the member countries of the alliance and right now we do not have a commercial pact with Colombia. Therefore, we have to check and evaluate and then meet all of the criteria.

On December 31, we reached the halfway point of our government. We still have 30 months to go and there are three areas of focus. One is the institutional area, and in that sense the Varela government has been able to restore some institutional balance in the country. Unfortunately, in the last three years of the Martinelli government there was a form of government that did not take into account the institutional balance that is needed, and both the judiciary and legislature have become an appendix of the executive branch. The other issue is economic; in our first full year of government in 2015 we achieved a 5.9% economic growth. In 2016, we are targeting between 5.3% and 5.5% growth. Even though there will be economic deceleration we have to bear in mind that we are keeping inflation low, at less than 2%, and will still grow the second most in Latin America behind the Dominican Republic. The growth forecast for 2017 is between 5.8% and 6%. In 2016, we were affected by several issues: the first was the so-called Panama papers, which were unjustly named because the banks involved were not in Panama. But it had an effect on the country all the same.

What should Panama do to improve its image as a transparent and reliable country to attract foreign investment?

This effort began immediately when we took on new business and enacted important pieces of legislation. We were also able to set up different mechanisms for reporting suspicious activities, which include obliging lawyers to report suspicious activities to the financial analysis unit. We have also signed a multilateral assistance tax relief bill, which has been signed by approximately 100 countries. In the beginning of 2018, we will take part in an automotive exchange of information between countries to ensure everyone has adequate safeguards to prevent information being used by third parties. Hence, we are taking steps that are being recognized by the OECD. We have good bilateral relations with major players such as the US and Germany. There is one notable exception, France, who without any justification has targeted Panama and is about to include us in a grey list beginning in January. We feel this action is not warranted, but the reason they are including us is because they say we are unable to provide information regarding the accounting information of a company. However, when they signed a treaty with us they were aware that our commercial code did not require companies who are not operating in Panama to require accounting information in Panama. We reformed the law and Panamanian companies or entities operating here now have to make their accounting information available.

What are your main targets and goals for 2017?

As far as infrastructure is concerned, we have been able to conduct public bidding on all the major infrastructure programs that we want to go ahead with. Only two are pending: the public bid for the fourth bridge over the Panama Canal and the third line of the metro system. These are projects that will be inaugurated by the new government in 2019. We will also complete the expansion of the highway between the bridge and Arraiján on the western side of the Panama Canal. We are also going to expand the Inter-American Highway from Chorrera in the western part of Panama to San Carlos in the touristic area. We will continue all the other infrastructure projects—some of which we will be able to inaugurate in 2017, some in 2018, and line two of the metro in early 2019. We want to create the economic conditions to keep economic growth between 5.8% and 6% for 2017 and keep fiscal discipline. When we inherited the government we had a public deficit of 4.0% and have been able to continue infrastructure investments, but with fiscal discipline. This means we are under the limits of the fiscal social responsibility law which sets certain standards for certain thresholds for public indebtedness.