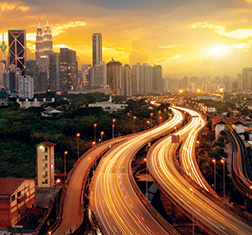 All Part of the Vision

Share on:
According to Credit Suisse, the CNB is forecast holding on rates in response to recent ringgit instability.

Before chasing the devil through the details, let’s consider the words of Former Central Bank (BNM) Governor Tan Sri Dato’ Sri Dr. Zeti Akhtar Aziz, on the ultimate potential of the financial universe according to Malaysia’s national vision. “Responsible finance, at its core, strives to serve a wider objective that is consistent with—but goes beyond—the predominant objective of enhancing shareholder value.” By taking on board greater inclusion and support for the real economy, therefore, “the financial sector can act as a social multiplier, significantly expanding the impact of positive finance.” This approach certainly seems to be working, as according to the latest 3Q2016 data of the BNM, the overall financial landscape, despite headwinds, features numerous…

Local financial entities remain an effective intermediary, while prudent fiscal policy addresses externalities, such as the policy moves of advanced economies. One such example was the surprise BNM reduction of the overnight policy rate (OPR) by 25bp to 3% at its Monetary Policy Committee (MPC) meeting of July 13, 2016. The BNM cited Brexit-related turbulence in promoting the move. According to Credit Suisse, The BNM is forecast to hold on rates in response to recent ringgit instability (5% loss in wake of the US election as of December 2016). Clear consequences of persistent weakness would be tighter liquidity for banks, and a severely dented bond market, among others. Yet, the institution believes Malaysia’s economy is set to expand 4.5% in 2017, thus outperforming 2016’s estimated 4.1%.

Malaysia’s financial institutions remain well capitalized, with combined capital buffers of MYR160.8 billion as of 3Q2016. At the banks, over 90% of total capital comprised retained earnings, paid-up capital, and reserves of a loss-absorbing nature. This is indicative of high capital ratios, where for the period, common equity tier-1, tier-1, and total capital ratios of banks respectively printed at 13.3%, 14.2%, and 16.7% (2Q2016: 13.4%, 14.3%, and 16.8%, respectively).

The bank’s financing margin net of operating costs and loss provisions was virtually unchanged QoQ at 0.59%. So, too, were returns on assets and equity at 1.39% and 12.9%, respectively. This was despite lower sectoral pre-tax profit of MYR8.1 billion (2Q2016: MYR9 billion) impacted by deflated fee-based income and dividend income from subsidiaries. As of 3Q2016, systemic liquidity was at a healthy MYR181.6 billion. Moreover, the system’s Basel III Liquidity Coverage Ratio (LCR) of 127.0% as of September 2016 (2Q2016: 124.7%) greatly surpassed the stipulated 70%. Note, too, that around 80% of banks could boast LCR levels of over 100%.

Banks’ funding structure is chiefly deposit-based (70.2% of total, with almost 90% of that in ringgit), which speaks of a robust savings culture. The BNM reveals that in recent years, to reduce maturity and currency mismatches in bank funding structures, “banks have been issuing medium-term ringgit and foreign currency denominated funding instruments.” As of September 2016, these instruments comprised 4.7% of total liabilities. The loan-to-funds ratio (LTF) was a stronger 83.4% for the quarter (2Q2016: 82.6%). So, to answer the question above, Malaysian banks’ counterparty exposure to Singapore and China is small (3% and below 1% of total banking system assets, respectively), greatly limiting the risk of contagion should either trading partner weaken. Singapore dollar and Chinese renminbi-denominated external claims respectively accounted for 10% and 2% of total banking system capital.

Landscape Not too Delinquent

Sector delinquencies, comprising loans-in-arrears of between one and three months, rose fractionally in 3Q2016 to 2.1% of total bank loans (2Q2016: 2.0%). Meanwhile, banks’ loan loss coverage ratio was at 89.4%. Quarterly household borrowings appreciated 5.8% (2Q 2016: +6.2%). Home financing, the primary driver of increased household debt, rose 9.7% QoQ (2Q2016: +10.2%), essentially driven by demand for affordable homes made possible by a stable local income and labor environment. The share of total household debt borne by vulnerable borrowers declined further to 22.6% (2014: 24.3%; 2013: 28.4%) of total bank and non-bank lending to households. For the period, 73% of new loan accounts had a debt service ratio (DSR) of under 60%. Delinquencies did rise modestly to 1.5% of total household debt (2Q2016: 1.4%) attributable to the lower income household bracket. And regardless of higher delinquencies and impairments in the construction and manufacturing sectors, the wider asset quality of banks’ overall businesses portfolio remained healthy. Accordingly, the ratio of impaired loans and delinquent loans was unchanged QoQ at 2.7% and 0.3% of total bank loans to commercial enterprises. Overall, banks’ outstanding business loans saw decelerated growth of 2.0% as at end-3Q2016 (2Q2016: 4.2%) on weaker demand from the real estate, oil and gas, and palm oil sectors.

The former BNM Governor noted that “in various parts of the world, failure to access finance has significant impact particularly on small and medium enterprises with the market size estimated at almost USD14 billion from USD7 billion in 2003.” SMEs play a key role in Malaysia’s economic diversification, at around 90% of all businesses. 3Q2016 growth in financing to SMEs remained strong at 8.5% (2Q 2016: 9.9%). Local businesses’ debt servicing, too, was encouraging, as the anticipated default frequency was at a low 0.62% (2Q 2016: 0.61%).
Perry Ong, Country Manager for Malaysia & Brunei at MasterCard, took the wider view, informing TBY that “ASEAN is a USD2.4 trillion economy and there is no doubt the AEC will place us into one common trade area.” Where, “Especially for SMEs, there is a great deal to gain from enhanced digital payment platforms and moving away from foreign cash realization at intermediate bank stations.” The company educates “SMEs on how to become e-commerce ready (in partnerships) with Google, MITI, and MATRADE to promote this.”

The Eleventh Malaysia Plan lends a hand to affordable housing. For 3Q2016, the primary and secondary housing markets remained deflated, notably in key states such as Kuala Lumpur, Selangor, Johor, and Penang, by official data. The affordable housing category saw both volume and value of transactions shrinking by 16.9% and 18% amid consumer caution. Meanwhile, the rise in the number of borrowers shouldering a minimum of three outstanding housing loans, used as a proxy for speculative house buying, rose 1.7% in 3Q2016 (2Q2016: 1.9%), as this 2.8% of total home loan borrowers hedged their investments.

Chung Chee Leong is the President & CEO of Cagamas Berhad, the National Mortgage Corporation of Malaysia, established in 1986 to facilitate the funding of mortgages by financial institutions by providing them liquidity. He informed TBY of how the firm has for close to three decades facilitated home ownership in Malaysia in step with government plans, having “issued MYR290 billion worth of bonds and sukuks to refinance about 1.7 million houses in the process… (meeting an urgent need, as) …in the 1980s, banks were reluctant to provide home loans due to the huge maturity mismatch and liquidity risks.” Some squaring of the circle was required in the mortgage market as “lending was long-term, while deposits were short-term, which is why Cagamas facilitated the intermediation process, tapping into capital markets and providing such long-term funding to financial institutions (which in turn) could provide loans to house buyers.” This has been realized through “two government schemes: the My First Home Scheme and the Youth Housing Scheme.” The former extends home loans for those below the age of 40, while the latter caters to married couples with household incomes of less than MYR10,000 as a couple or MYR5,000 individually. They may borrow up to 100% from banks, “with the first 10% guaranteed by our sister company, Cagamas SRP Berhad (while) the government of Malaysia pays the guarantee fees.”

Malaysia is a byword for financial services in compliance with the tenets of Islam. The rising value invested in ethical banking, responsibly invested, has only served to swell its growth. According to the former BNM Governor Tan Sri Zeti, “By virtue of its requirement for financial transactions to be supported by genuine productive activity, Islamic finance is deeply rooted in the real economy. These are the hallmarks of Islamic finance that underpins greater market discipline and stronger focus toward building sustainable and long-term value in capital allocation.” Leong, meanwhile, explained how “about MYR43 billion of our total bonds were sukuks (popular) because the Malaysian government, the Central Bank, and the Securities Commission have put together a complete financial ecosystem, including Islamic banks, Islamic securities companies, takaful operators, Islamic asset management companies and Islamic pension funds, which provide ready demand for sukuk issuance.”

Based on the officially projected economic growth for the coming decade, Malaysia’s financial system will stands to grow annually by between 8 and 11%, deepening the financial system to six times GDP in 2020 (2010: 4.3 times GDP). Thereby, its contribution to nominal GDP is set to rise from 8.6% in 2010 to 10-12% by that year. The sector, through strict checks and balances, continues to propel the national vision.