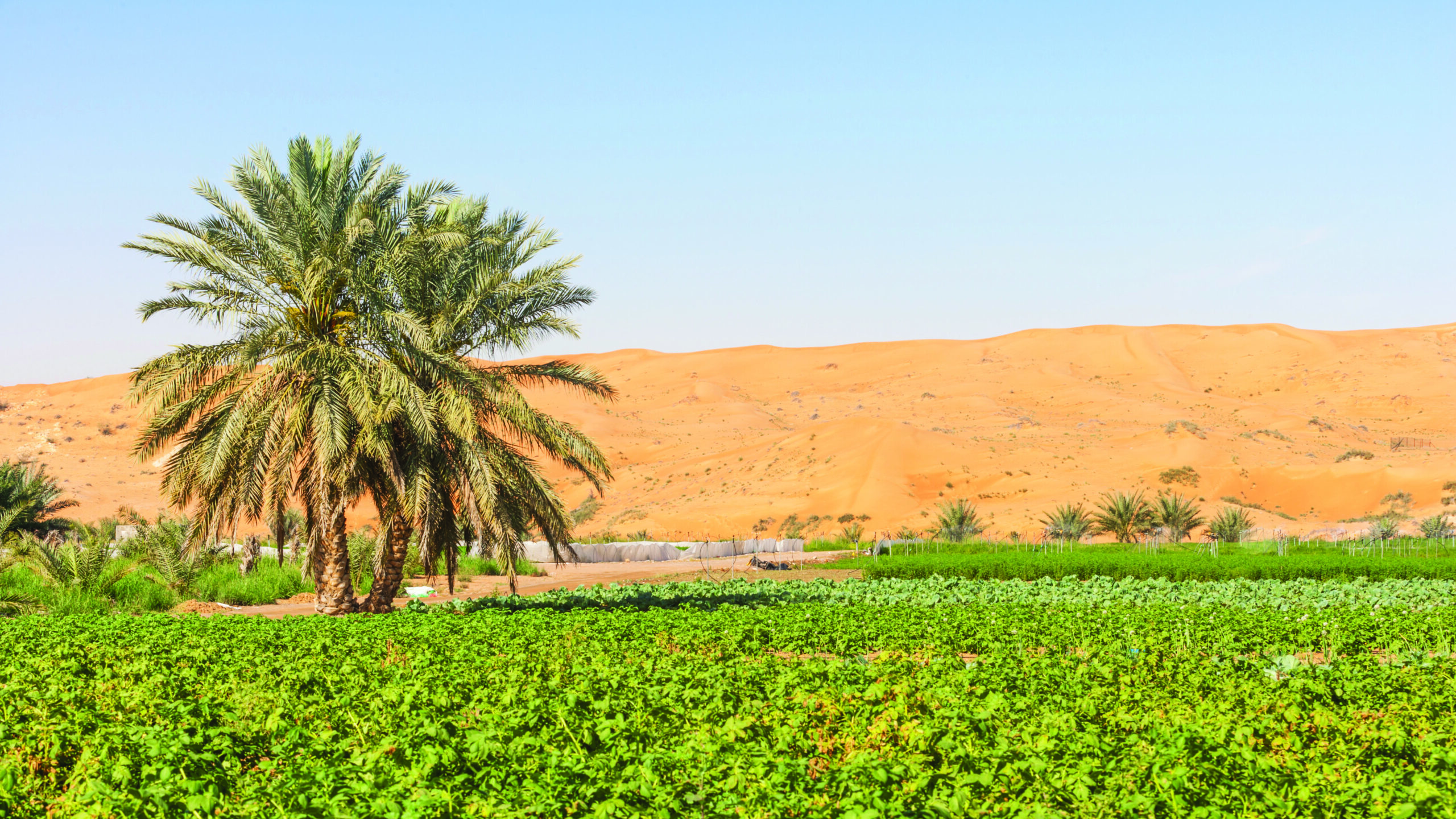 Share on:
Using the latest technology and with a keen eye for sustainability, Abu Dhabi's agriculture sector is poised to continue its strong, sustained growth.

While it may seem Abu Dhabi’s intensely hot climate, arid desert, and limited water resources would prevent the Emirate from building a strong agriculture sector, the industry has been growing for decades. At the behest of Zayed bin Sultan Al Nahyan, then-Sheikh of Abu Dhabi and the first president of the UAE, the Emirate built a strong agricultural infrastructure and laid the foundations for the sector to assume a significant part of the Emirate’s non-oil economy. As for 2018, two new innovative projects included capacity building and development in the field of camel diseases, as the Emirate seeks to become a reference center for the World Organization for Animal Health in camel diseases. There was also a major push to develop honey bee species in the UAE by improving adaptive capacities of native species to local climatic conditions. Indeed, the country has witnessed a decline in local honey production, which ranges from 10 to 20kg per hive per year.

The primary agricultural regulator in the Emirate is the Abu Dhabi Food Control Authority (ADFCA), established in 2005. Among ADFCA’s top priorities is achieving sustainable agricultural development, and the authority has implemented several policies in line with the Ministry of Climate Change and Environment. ADFCA also works with several other governmental organizations, ensuring that infrastructure is adequately developed, proper irrigation techniques are used, groundwater is reserved, and agricultural waste is properly disposed of.

The poultry sector in Abu Dhabi has been developing since the late 1970s, before which nearly all poultry consumed in the country was imported. The industry has seen steady and sustained growth over the last 10 years, gradually reducing the amount of poultry imported from other GCC states, such as Saud Arabia and Oman. The Emirate produced some 47,000MT of poultry in 2017, representing an increase of 5% on the previous year. The number of eggs produced in Abu Dhabi also increased in 2017, growing close to 850 million.

According to the ADFCA, the number of entrepreneurs in the poultry industry has increased from three in 2012 to 11 as of 2017. Some of the major local players include Mazzera Chicken, Jannen Chicken, Al Khanza Chicken, and Khouri Chicken, which, combined, contribute a significant portion of local market demand for poultry products. All poultry produced within Abu Dhabi is halal slaughtered.

Abu Dhabi has also made significant progress in its development of perennial horticulture. According to ADFCA, the number of new fruit nurseries in Al Ain alone reached 45 as of 2017, approximately 15 more than in 2013. Abu Dhabi has also seen a 60% increase in fruit sapling qualities, highlighting the variation in perennial horticulture in the Emirate.
Several varieties of fruits and vegetables have thus far proved highly suited to Abu Dhabi’s climate. For example, the Sidr and Khandari varieties of pomegranate, native to tropical Thailand, have proven to adapt well in Abu Dhabi’s arid climate. Enhancing food security, vegetables like the potato, cucumber, and tomato have also performed well, boosting food security and strengthening the economy.

While Abu Dhabi has built tremendous momentum in the sector in recent years, there are still areas where the Emirate can improve. TBY sat down with Nasser Mohammed Al Junaibi, the acting CEO of Abu Dhabi Farmers Service Center (ADFSC), who described what he considered to be the main issue: “Water consumption in agriculture is the main challenge, which is countered through the development and maintenance of efficient forms of irrigation,” he said. “In this sense, there has been a strong push to educate farm owners on several issues: usage on new systems such as inline pressure compensating dripline and adjustable online drip irrigation systems; dosage of water on crops such as date palms; and the introduction of hydroponic technology.”

Hydroponic production is frequently pointed to as a highly sustainable method of agriculture production, and Abu Dhabi currently has more than 110 operational hydroponic farms throughout the Emirate, up from five in 2012. Among Abu Dhabi’s several hydroponic production farms is Aeroponics Farms, which initially received foreign investment from Japan Development Bank. Established at Al Khanza, the farm produces high-quality crops while reducing water usage by some 80%, cutting electricity costs in half and reducing external recurring crop inputs by 40%. This technology in particular will enable farmers to grow crops outside the traditional off-season and throughout the whole year, leading to the achievement of better returns and the provision of high-quality products. First introduced to Abu Dhabi’s farms in 2011, hydroponics saw a steep increase in adoption after the Khalifa Fund for Enterprise Development, in collaboration with ADFSC, launched the Zaarie program in 2014, under which 100 farms were lent around USD270,000 to install hydroponic technology.

Biosecurity also remains at the heart of the Emirate’s agribusiness strategy. High temperatures and an arid desert climate constrain yields for most types of crops, forcing the country to remain heavily reliant on food imports. As such, in late December 2017 the Ministry of Climate Change and Environment decided to set up initiatives and eventually legislation to reduce the country’s dependence on imported food stuffs. It also clarified that in the case of an emergency, the UAE had enough food resources to survive for six months to a year.

As things stand, up to 85% of the UAE’s food is imported. However, Dr. Thani bin Ahmed Al Zeyoudi, Minister of Climate Change and Environment, confirmed that the government, in collaboration with private partners and other stakeholders, would look into providing an “adequate supply of food from multiple and reliable sources.” The strategies involve VAT exemption for farmers, initiatives for caretaking local livestock and animals, best practices producing high-quality food stuffs, and urban farming.

While the focus on maintaining a steady supply of goods into the country has not waned, major efforts are being employed in detecting diseases and epidemics through electronic surveillance programs. This has also come with an animal identification and registration system that tracks the movement and changes of animals. Moreover, an electronic integrated program is currently managing other subsidiaries, such as the electronic feed-support program, and conducting regular inspections to keep up with the increase in the number of food establishments.

Last but not least, what really seems to drive the agribusiness market in the Emirate is the growing demand for organic and healthy products. Foodco Holding’s CEO, Joachim Yebouet, still believes the market is ready to embrace this global trend: “The health factor is the next stage and will bring in healthy foods. However, this trend has not hit the market here as quickly as people would have thought. At a supermarket, the organic shelf is still not even one-10th of the store.” As such, more organic vegetables and fruits are poised to enter the Abu Dhabi market as 100 traditional farms are being converted into organic farms, as stated by Gulf News. According to ADFSC, a model organic farm created on Zayed Farm, a 98-hectare property in Liwa, has already started supplying its produce to the market. Following its success, ADFSC recently signed agreements with 25 more farms to help them go organic. Starting in 2019, around 20 farms will go organic every year. This initiative is part of a sustainable agricultural policy that helps preserve natural resources and provide markets with healthy, safe and high-quality products.

Even Agthia, a market leader in the food and beverage sector, believes that to remain competitive in the future, “the necessary steps include opening up to the full range of wellbeing services, trying to get closer to the customer, and maintaining their trust.” Moreover, the company’s CEO, Tareq Al Wahedi, interviewed by TBY, has sought to match Agthia’s commercial strategy to the needs of the country, moving from a B2B to a B2C model while at the same time playing “a crucial role for food security programs since 2008, along with its 54 outlets in the country.” Maintaining a heavy focus on science-based innovation, Al Wahedi also insists that with the introduction of smart subsidies, the food security system has been optimized and should expect the private sector to play an increasingly important role. While historically supported by a number of government-led initiatives, Abu Dhabi has been able to both boost domestic supply and integrate supply chains with an increasing role for the private sector, a further sign of growing market maturity.