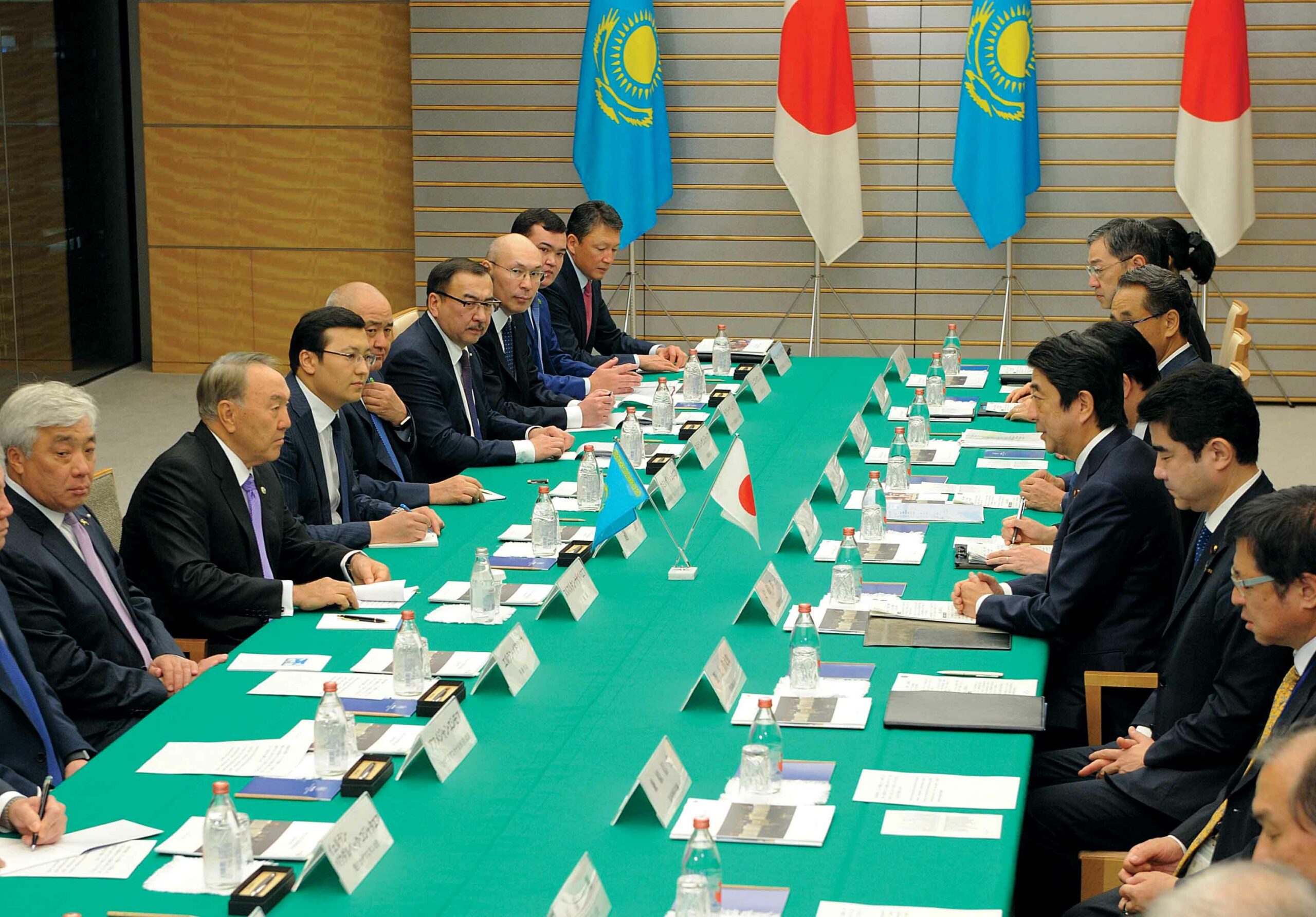 A Seat at the Table

Share on:
Achieving a stable domestic political situation is particularly important considering Kazakhstan's increased role as a political force in the region.

Everything old is new again. As was the case during the reign of the Mongols, Kazakhstan has become a key regional crossroads, able to deal with Europe and Eastern Asia thanks to well-established relationships. After decades developing its extraction-based economy after the fall of the Soviet Union, the ninth-largest country in the world is beginning to turn its wealth and connections into political influence in the region. Within the past year, the government has hosted peace talks for the Syrian conflict and forged a new set of trade and political cooperation agreements with Japan, South Korea, and the EU. More will be forthcoming in the coming years, with Astana set to host Expo 2017 and President Nursultan Nazarbayev’s shift of powers to the Kazakhstani Parliament.

Easily the most significant domestic political development in Kazakhstan was President Nazarbayev’s announcement in early 2017 of upcoming reforms that would amend the country’s constitution to redistribute powers. The reforms, which were developed by a special working group formed by a presidential decree in December 2016, are aimed at increasing separation of powers to increase efficiency and streamline bureaucracy. In his speech, Nazarbayev grouped the reforms into two main areas: transfer of powers from the executive branch to the wider government, and a rebalancing of power between government branches. While the president will remain the final authority on strategic matters, much of his role as overseer of domestic social and economic policy will be given to other bodies. Kazakhstan’s parliament, a bicameral legislature with 107 seats in the lower house and 47 in the upper body, will also be gaining new regulatory powers in order to better serve as a check on the executive branch.

These reforms are still underway and the necessary constitutional rewrites have yet to be finalized, but this is an unprecedented step for the government, one that will reshape the nation’s political balance for decades to come. Nazarbayev, the only president Kakazhstan has known since the dissolution of the Soviet Union, explained in a televised address that these reforms are a necessary response to the regional and global challenges Kazakhstan is facing. Decentralizing political power is viewed as a necessary step to creating a more sophisticated government as the Kazakhstani state enters a new stage of political maturity. Questions remain about the process, which is likely to take years to be fully completed. Transitioning from a system where Nazarbayev had a great deal of control to a parliamentary party-based one will not come without its challenges, first and foremost coming from the lack of substantive political parties in the country. In addition, the president has a considerable amount of direct appointments under the current system; Kazakhstan’s 47-member senate has 15 members directly selected by Nazarbayev, and numerous regional and municipal positions are assigned via direct appointment as well. The challenge for Kazakhstan will be finding the balance between the executive leadership that has allowed it to become a regional success story while decentralizing and becoming more efficient. Nazarbayev took care to remind Kazakhstanis that there is no one perfect form of government, noting that the nation must find the balance that is right for it.

Achieving a stable domestic political situation is particularly important considering Kazakhstan’s increased role as a political force in the region. Under President Nazarbayev, the country has taken a new role as a key economic participant in economic and diplomatic missions, using its numerous connections with East Asian, Middle Eastern, and European countries to become a popular mediation site for them all. Kazakhstan’s role as the host of negotiations between Syrian conflict participants is just one such example: Russia, Iran, Turkey, and Syria agreed on Astana as the site for peace negotiations for the conflict in Syria. The talks have brought almost all the major parties involved in the conflict to the table, including 14 rebel factions, in the aims of establishing a ceasefire and eventually a peaceful end to the conflict. Kazakhstan’s long-established relations with Russia and Turkey and international confidence in the security and reliability of the process made it a natural choice to host said talks. It has also been the site of the 2010 Organization for Security and Co-Operation in Europe (OSCE) Summit, the nuclear talks between the P5+1 and Iran in 2013 that led to the 2015 Iran nuclear deal, and was scheduled to host negotiations on the conflict in the Ukraine in 2016 before both sides backed away.

Kazakhstan’s most important regional relationship is with the Russian Federation. Members of the Soviet Union until its dissolution in 1991, the two countries have strong cultural, ethnic, and economic ties; Russian is an official governmental language, and ethnic Russians make up over one-fifth of the Kazakhstani population. Nazarbayev is on close terms with Russia’s government, and in recent years the two nations have worked to ease trade restrictions, opening a customs union in 2010 and launching new bilateral economic initiatives. Nevertheless, Kazakhstan has found itself needing to deal with economic challenges concerning its relationship with the largest country in the world. Trade between Kazakhstan and Russia has fallen over the past few years due to falling oil prices and international sanctions against the Russian state that have hampered commerce. Regional turmoil in Ukraine has led to Russia imposing blockades across several key transport sites on its border, hindering Kazakhstan’s ability to trade with what was once its third-largest trade partner; as a result, according to Comtrade data, Kazakhstan’s imports from Ukraine have fallen from USD3 billion in 2012 to less than USD1 billion in 2015. Still, despite such difficulties Kazakhstan and Russia remain linked, each mutually invested in the health of the other. In late 2016, the two sides signed a total of 27 agreements worth some USD4 billion, a marker of the continued cooperation yet to come between the two.

Kazakhstan is a member of several global and regional organizations. Perhaps most prominent at the current moment is its non-permanent seat on the UN Security Council. In 2016, Kazakhstan beat out Thailand to win a two-year term on the UNSC for the first time in the nation’s history. In doing so, it joins permanent members China, France, Russia, the UK, the US, and nine other non-permanent members. While its power as a non-permanent member of the council is limited, Kazakhstan’s unprecedented election is a sign of global awareness and recognition of its role as a stable mediating force in an often volatile region. Thanks to its positive relationships with other members of the UNSC, especially Russia, China, and the US, it appears likely to remain a key participant in critical global discussions for years to come.

Kazakhstan is a key member of the OSCE, the world’s largest intergovernmental organization focused on primarily security. Its 57 participating states have a history dating back to 1973 and work on preventing conflicts in the northern hemisphere. Kazakhstan has played a larger role within the organization in recent years, including assuming the chairmanship for the first time in 2010 and hosting a landmark Summit of State that same year, in both cases the first former Soviet state to do so. At the Astana Summit in 2010, Kazakhstan played a crucial role in bringing parties together for the aforementioned Iran nuclear talks and debuted the Astana Commemorative Declaration, a blueprint for the future that reaffirmed OSCE’s commitment to trust, transparency, and collaboration between states. Widely praised as a success, the summit marked a new landmark for Kazakhstan’s position in the global diplomatic community.

Kazakhstan’s final key regional organization is the Eurasian Economic Union (EEU), a union of northern Eurasian states for the purpose of creating a single market and attaining new levels of interstate economic integration. First proposed by President Nazarbayev in 1994, the EEU was founded in 2014 with Belarus, Kazakhstan, and Russia as charter members. Since then, Armenia and Kyrgyzstan have also joined. The EEU has thus far focused on facilitating the free movement of goods, capital, and people between member states, with discussions about a common currency or a monetary union currently ongoing. Key partners in the region have expressed interest in forming economic partnerships with the EEU, and Vietnam, Uzbekistan, Moldova, and Ukraine have already signed free trade agreements with the union, with Serbia currently in negotiations.
As with other programs, Kazakhstan’s strong relationships give it a unique position within the EEU. Unlike other member countries, it enjoys good relations with all other members as well as the EU, its largest trading partner. Trade between the EU and Kazakhstan accounted for more than USD31 billion in 2015, more than 40% of all Kazakhstani foreign trade. The past decade has seen European investment in the Kazakhstani economy increase by 1000%, and, in 2016, Kazakhstan became the first former Soviet state to sign an Enhanced Partnership and Cooperation Agreement with the EU. The trade links Kazakhstan has cultivated with both the EU and EEU will pay dividends in the years to come, firmly establishing the nation’s place as an essential part of the global network.