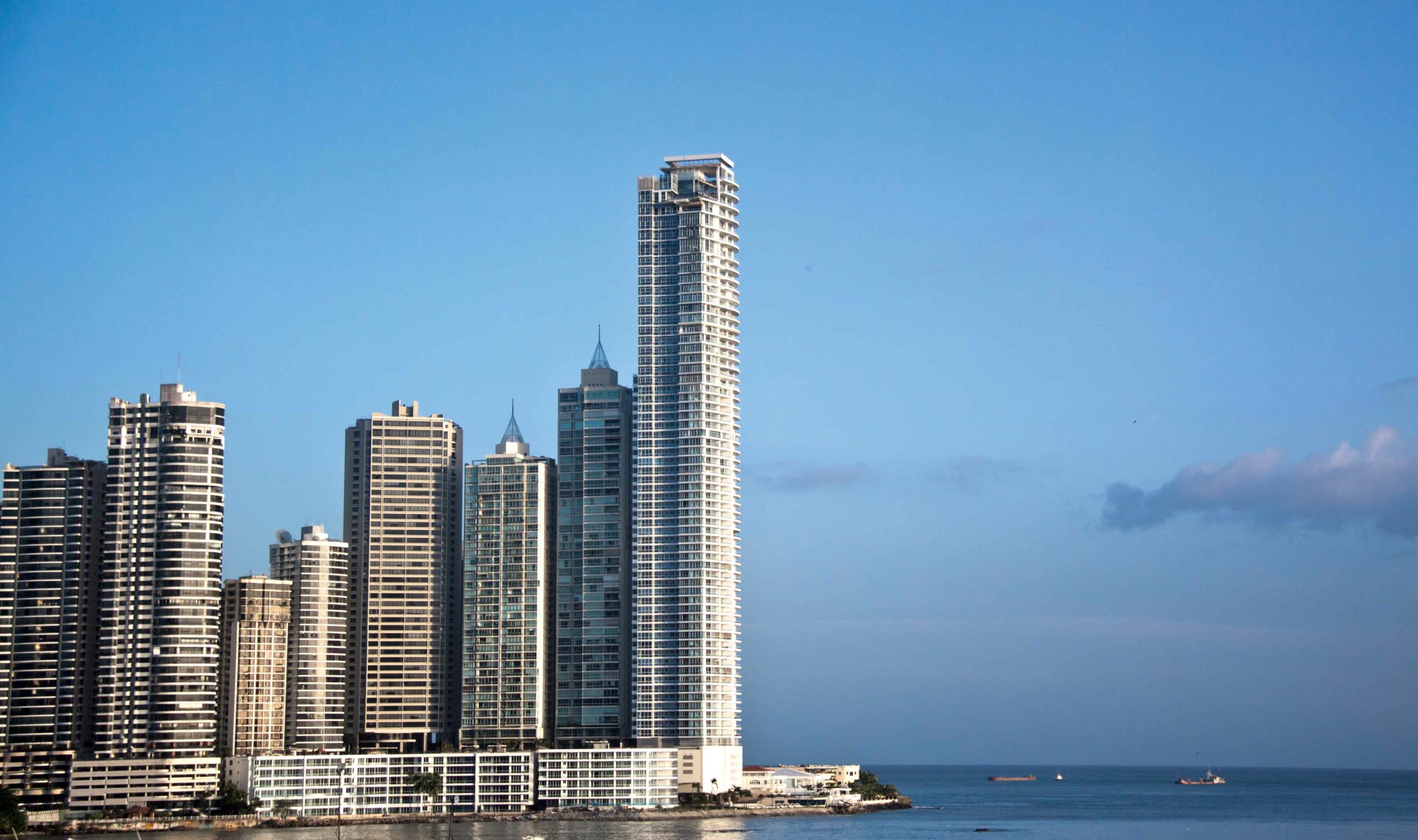 A Piece Of Pacific Paradise

Share on:
Panama, with its unique mixed-environment of urbanism and natural beauty, is attracting foreigners from the across the globe.

Panama’s hybrid and liminal economy is driven by international investment. The real estate sector does not deviate from this. Panama has experienced a continuous wave of international residents, attracted by liberal and incentive government legislation, spurring abundant growth of skyscrapers and non-urban communities complete with “golf courses and other amenities typical of retirement communities in the US.”

Prima Panama outline that there are at 107 20-story residential towers in Panama City currently under construction, each valued at $3.2 billion. The average price of a new small apartment is $289,000, with prices in upscale neighborhoods averaging at around $500,000 for a condo. In some areas, non-residential sale prices have recorded a 10% increase from last year. Punta Pacifica is the most unique urban development in Panama City, with cutting-edge architecture; the area is fast becoming a global innovator pushing the boundaries of urban design. Within this exclusive 5-star waterside locale of skyscarpers, prices have increased 14% from last year, with sales volume also up by 35%. In 2014, prices in Punta Pacifica averaged at $2,200 per sqm, with low-grade properties pricing at $2,000 per swm. In the second quarter of 2015, high-grade real estate prices had gone up to $2,500 per sqm, with low grade properties pricing at $2,200 per sqm.

Panama’s tax-free zones are targeted to attract the foreign real-estate investor. The vast majority of the client portfolio are retirees from the US and Canada. The incentives on offer are influenced by the 1980s boom in Costa Rica and include: liberal landownership laws, a one-time exemption of up to $10,000 on imported goods, a tax exemption on newly constructed properties for 20 years, and a 2.1% tax on all other properties. These tax-free zones are also aesthetically pleasing, and include state-of-the-art shopping malls, cinemas, sporting facilities and golf courses. Jackiewicz and Craine offer an extensive description of the tax-free zones: Zone 1, La Amistad—located in the provinces of Chiriqui and Bocas del Toro, characterized by the presence of La Amistad International Park and Baru National Park. The structure is composed of 61 attractions (47 are natural and 14 are cultural).

The main areas of this zone are concentrated in Boquete and to a lesser extent Cerro Punta, Volcan and the Sereno River; Zone 2, Bastimentos—the province of Bocas del Toro has one of the largest marine parks in the country which includes beach areas, reefs and the presence of the Afroantillian culture which is most present in the architecture of the city of Bocas del Toro. The tourist areas of this zone are made up of 78 attractions (58 are natural and 20 are cultural), predominating sandy, white beaches and crystalline waters; Zone 3, Arco Seco—the Arco Seco includes the coastal areas of the provinces of Herrera and Los Santos; Zone 4, Farallon— the Farallon includes 80 km of Pacific Coast, distributed between the provinces of Panama and Cocle. It is comprised of 24 natural attractions of which 17 are beaches and the Anton Valley; Zone 5, Metropolitan—whose attractions include shopping, business activities, historical and cultural attractions as well as the natural parks that surround it. This zone has 126 attractions (72 are natural and 54 cultural); Zone 6, Portobello—located in the province of Colon consists of beaches and innumerable diving areas, a National park and an assembly of historical monuments. Zone 6 accounts for 82 attractions (54 are natural and 28 are cultural) mainly reefs for underwater explorations and ruins of the forts of Portobello; Zone 7, San Blas—the Caribbean of the Kunas, an exotic place due to its islands and areas of corral reefs and white sandy beaches guards one of the most traditional and native of the Americas. There are 200 attractions in this zone (173 are natural and 27 are cultural). It is characterized by more than 300 coral based islands and associated white sandy beaches; Zone 8, Archipelago de Las Perlas—composed of more than 30 islands and 83 beaches in the Pearl Island Archipelago, complimented by ample coral reefs and innumerable sport fishing areas. Zone 8 is made up of 136 attractions all of which are natural, characterized by beaches and fishing spots. Zone 9, Darien—this zone is made up of 72 attractions (39 natural and 33 cultural). The main attraction is the Darien National Park declared by UNESCO as a Biosphere Reserve, integrating the indigenous groups that live in this zone.

Edward L. Jackiewicz and Jim Craine’s paper, “Destination Panama: An Examination of the Migration-Tourism-Foreign Investment Nexus”, is a comprehensive analysis of the intense promotion of the real estate industry, and its effect on human and capital flows into the country with economic, social and environmental implications. They note that an increasing number of international real estate companies, mostly from the US, are entering into and expanding their presence in Panama, attracted by a range of different factors such as the economic climate and the favorable government legislation for investors. Some of the large enterprises operating in the Panamanian market include: Century 21, Coldwell, Banker, Re/Max, and International Living. These companies are offering a wide variety of different housing options from luxurious mansions, to condos and apartments in a multifarious number of locations, such as urban-living to beach properties to rural foothills and mountains. Their portfolio is targeted at US and Canadian retirees looking to settle down somewhere in the sun for their retirement years.

Jackiewicz and Craine note that the largest conglomerate is International Living, founded in 1979, who have maintained a comparative advantage through building links between international residential tourists and Panama’s most sought after destinations. They explain that International Living’s success is very much due to their niche of offering a, “wide variety of travel activities including river rafting and various sight-seeing adventures, as well as touring residential communities, thereby making an explicit link between tourism and migration.”

Panama was ranked the best place to live abroad for Americans, in International Living’s newsletter. So, whats the pull factor? Well, Panamanian real estate has an intermediate price range compared to other areas in Central and South America. Price incentives also include the low price of property insurance and low tax regime. Expatriates in Panama are also afforded the same property ownership rights as native citizens.

Other pull factors include the standard and quality of living, and English-speaking friendly environment. The healthcare system is full of US-trained doctors and nurses. Panamanian infrastructure can compete with the developed world, with high-quality services and technology. The security situation is also desirable, and many of the high rise residential complexes, resorts, compounds, and gated communities include a strong security and surveillance presence, where residents can feel safe and at ease.

Prima Panama explain that vulnerabilities and disambiguates in external markets is also pulling more and more international real estate clientele into Panama. The recovery of the US economy has meant Americans are saving for retirement homes again. Nonetheless, Venezuelans are also increasingly looking to have a piece of the Panamanian pie. The unstable security and economic situation in Venezuela has the upper strata looking to make solid investments outside the country. These wealthy citizens are attracted to the stable and secure economic and security environment that Panama offers, an environment that Venezuela does not look able to achieve in the near future.

A concept known as the “Miami Effect” is also boosting the attractiveness of Panama City. Miami and Panama City have always been in direct competition for international real estate investment. Prices have begun to hike recently in Miami. Panama City’s price rise has not been as significant. This is meaning that investors are flocking to Panama City to buy up property with preferential prices.

Prima Panama explain that this is leading to a construction boom. “All around Panama City, there are signs of new construction, as the industry responds to the improving market. Adjacent to Punta Pacifica, construction is underway on several three story apartment buildings on Ocean Reef, the first of two manmade islands.” Also, in the Amador Causeway area, near the Frank Gehry created bio-diversity museum, which was opened not long ago, “developers are proposing several projects that could create a new luxury residential sub-market for the city.”

Differential to previous years, the natural market process is boosting the growth in the market, much unlike the illogical buoyancy of the boom days. Real estate analyst Duncan McGowan explains, “There are few speculators or flip specialists active in the market these days. Buyers and sellers are responding to the economic growth and a desire to be part of the booming city, a true sign of a healthy residential market.”

In an interview with TBY, Carlos Malo de Molina, General Manager of Green Valley Panama explained, “The real estate sector has great potential with plenty of opportunities for investors. The development of this industry goes hand-in-hand with the development of the country.” Panama’s GDP has quadrupled in recent years, and is currently around $50 billion. The economy has been growing between 5% and 6%. Wages are around $12,000 on average. Mal de Molina explains these figures have attracted a huge amount of investment into the real estate and construction sector. “There is increased access to the housing market for both Panamanians and foreign investors. Demand in the housing market has grown at a very fast pace in the last ten years and the sector had to catch up to meet this demand.”