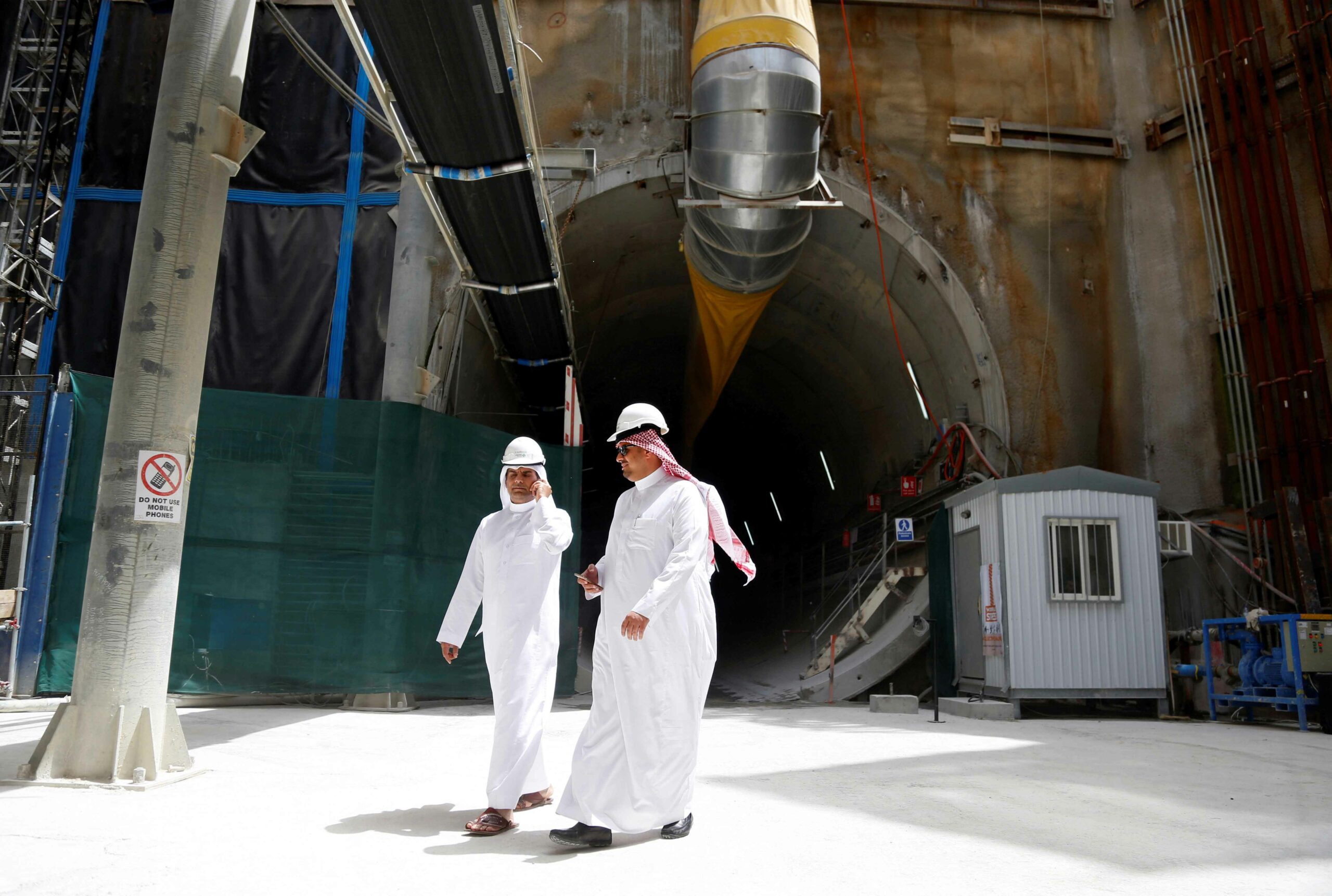 Share on:
An ambitious series of road and rail projects from the Jordanian border down to the Indian Ocean are slated to open in part before the end of 2017. They bring the Kingdom that much nearer to its goal of greater non-carbon-based economic integration with the world.

Well into the late 19th century, it is thought that some 20% of hajis were still perishing from the punishing conditions of the 40-day schlep from Damascus across the Arabian Desert and Hejaz mountains to visit Mecca. And though necessity may be the mother of all invention, war is often the midwife: given the Ottoman Empire’s preoccupations with British expansion in the Gulf and Horn of Africa, it made perfect sense to build a railway from Damascus to Mecca—not only to facilitate travel to the world’s most important place of pilgrimage, but also to connect Constantinople with Ottoman military garrisons in the southernmost stretches of the empire. The Hejaz Railway was thus launched in 1908.

Cut short by the outbreak of World War I, the famed railway never got further than Medina, some 400km short of its target. But thanks to a hugely ambitious scheme now being undertaken by the Kingdom of Saudi Arabia, the 19th century dream of connecting Medina with Mecca is now on the verge of being realized. Slated to open in part by December 2017 and in full by March 2018, the Haramain High-Speed Rail project, alternately known as the “Western Railway” or the “Mecca-Medina railway,” will cover a total distance of 450km and connect Mecca at the southern end with Jeddah, King Abdullah Economic City, Rabigh, and Medina to the north, including a 3.75-km extension to the King Abdulaziz International Airport.

Under construction since March 2009, the country’s first-ever high-speed railway network is designed to travel at 320km/hour. In March 2017, it was reported that some 430km had already been completed by the Spanish-led Al-Shouna consortium of two Saudi firms and 12 Spanish ones that won the EUR6.74 billion (USD7.7 billion) contract in 2011 to build the railway. The three leading firms in the consortium, the Spanish national rail company Renfe, train-maker Talgo, and Spanish state track operator Adif, will provide service and maintenance for 35 trains to operate the line for a period of 12 years. Though Haramain is far and away the consortium’s single-largest foreign project to date, Spain does boast the second-largest high-speed railway network in the world after China, with some 3,100km of rail already laid and another 1,800km of track under construction.
A pretigious project for the Kingdom, it is imperative that it is completed on time by early 2018, not only to prevent any further prodigalities—having already gone USD160 million over budget and missed its original December 2016 opening—but, more importantly, to ease the overwhelming traffic of pilgrims to Mecca and Medina each year. With an estimated 1.5 million people expected to arrive in the holy city this year for the five-day Hajj, the Haramain will take extensive pressure off the nation’s overworked road network, ferrying up to 500,000 pilgrims by rail to the Kingdom’s two holiest sites.

When completed, the railway will also be an engineering feat of staggering proportions, not just a social and religious one. Given the violent winds of the Arabian Desert, which can cause huge sand dunes to form overnight, many of the stretches en route to Medina from Jeddah will be acutely vulnerable to such formations. Though the consortium has already begun building up to five-meter walls along much of the railway’s trajectory, the builders—who have overcome similar if not quite as acute topographical challenges in Spain’s harsher climates—will still face a daunting learning curve in keeping sand off the tracks. It is thought by several experts that maintenance teams will have to sweep sand from the tracks every night. All the same, the speed with which things are progressing and the vehemence with which the Saudi transport minister Sulaiman Al-Hamdan is overseeing the project’s completion suggest the consortium will have no choice but rise to the challenge.

Elsewhere in the country, railway expansion continues afoot. In February the Saudi Railway Co. (SAR) opened the first phase of a new 1,250-km railway that will eventually link Riyadh to the land port of Al-Haditha on the Jordanian border. Putting the Saudi rail network within 163km of the Jordanian capital, Amman, and a mere 235km from Jerusalem, the line has already opened three stations that extend from Riyadh as far as Qassim, a region several hundred kilometers northwest of the Saudi capital. When completed, the Riyadh-Al-Haditha line will be connected to the Riyadh-Dammam line, built in 1951 and terminating at Saudi’s largest port on the Arabian Gulf, Dammam. Eventually to consist of six cars, at this initial stage the Riyadh-Al-Haditha line will have two cars with a total capacity of 444 passengers.

Cities of Salt no longer asunder

With Riyadh’s population expected to grow from 6 million today to 8.5 million in the coming decade, the challenge to accommodate this explosive growth and reduce an overreliance upon automobiles with cutting-edge public transportation is already underway. Destined to open in 2019 to the tune of USD22.5 billion, the Riyadh Metro will have six lines, 85 stations, and run a total length of 176km. Responsible for the first two lines is the BACS consortium of Bechtel, the largest construction and civil engineering company in the US, Almabani (SA), Consolidated Contractors Company, headquartered in Athens and the largest construction firm in the Middle East, and Siemens, based in Munich and the largest manufacturing and electronics firm in Europe. Line 1 will run through the center of Riyadh from north to south and cover 38km, much of which will be underground. It will have 22 stations, four of which will have transfers. Line 2 will run east to west over some 25km and have 13 stations, three of which will have transfers.

Meanwhile in the heart of the city, developer Saudi Oger, Saudi’s largest construction firm, is fast at work building the new King Abdullah Financial District. To service this “eco-friendly, car-free oasis,” as it is calling it, the Canadian aerospace and transportation firm Bombardier won a USD241 million contract in 2010 to build its signature Innovia Monorail 300, already in place in São Paolo, Las Vegas, and Disney World, to service the pedestrian district. The 3.6-km monorail will consist of six two-car driverless Monorail 300 trains and have six stations.

Above ground, the city recently awarded Turkish construction conglomerate Yüksel a USD508 million contract to build the city’s Bus Rapid Transit (BRT) project. To include 34 stations, 1,353 bus stops, and six pedestrian bridges, this last phase of the project will “complete” the city’s transport infrastructure plan, in the words of Yüksel chairman and CEO Emin Sazak. Financed by the Ar-Riyadh Development Authority (ADA), the BRT will “provide metro-quality service at a fraction of the cost,” and greatly increase public transportation ridership in the Kingdom’s capital, Yüksel said. Slated to be finished in 2017, the BRT will consist of three lines spanning 85km and add to the Riyadh bus network’s total 22 lines traversing more than 1,200km and 6,765 bus stops.
Further west along the Red Sea, similarly ambitious plans are underfoot to build a world-class underground transportation network in Jeddah. Launched in 2015 with an estimated total cost of USD12 billion, the Jeddah Metro’s four lines are slated to open by 2022 and expected to transport 30% of all the city’s commuters by 2040. London-based Foster + Partners won the contract to develop the project’s architectural vision, which will include the design of all 46 stations and the trains that will service them.

A large aspect of the project will be the creation of new underground and shaded public amenities located at various stations throughout the system. Their inspiration for these is the ancient quarter of Al Balad and its dense, tree-lined shaded urban core, which allows for bustling commercial and cultural interactions. Those “transport nodes” will each form the nucleus of new pedestrian-centered urban neighborhoods. As things currently stand, only 12% of Jeddah’s residents live within a 10-minute walk of the city’s current transportation nodes; the aim of the new Jeddah Metro is to increase this to over 50%—and with it enhance the vibrancy and diversity of the Kingdom’s most dynamic city.