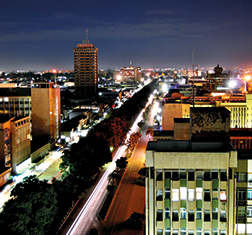 Share on:
Falling demand for its mineral exports has slowed the Zambian economy in recent years, but a recommitment to fiscal prudence and the new Economic Development Plan should help bring about new growth.

After a decade of strong growth that saw its GDP peak at USD28.045 billion in 2013, Zambia saw difficult years in 2015 and 2016 due to a number of economic factors. Decreased demand for the nation’s primary mineral exports resulted in cascading issues that have led to fiscal issues and declining GDP growth. Still, Zambia is widely considered to have some of the highest economic potential in Sub-Saharan Africa thanks to its natural resources, political stability, and openness to foreign investment. Recent projects have begun the process of creating the infrastructure and fiscal stability needed to develop a more robust economy able to add value to the nation’s natural resources. It will be a lengthy process, but Zambia’s international relationships should help forge the knowledge transfers needed to push the nation’s economy to the next level.

Like many other African nations, Zambia’s economy is largely predicated on the extraction of its natural resources. Mining is the country’s most important industry; copper exports make up some 80% of Zambia’s foreign earnings, and cobalt, silver, and precious stones are all extracted in large amounts. The bulk of this goes to China, which receives over a quarter of all Zambian exports. Mining revenue grew from ZMK7.6 billion in 2013 to ZMK7.7 billion in 2013 and ZMK8.8 billion in 2014, but dropped 9% in 2015. Although production rose from 708,259 tons in 2014 to 710,860 tons in 2015, falling global demand—particularly from China—drove prices down 23%. As a result, GDP growth fell to 2.92%, well below the 7.7% growth that was the average from 2000-2010. 2016 growth remained at approximately this rate of 3%, but an IMF regional economic report in late 2016 projected that Zambia’s GDP would rise slightly to 4% in 2017, then to 4.2% in 2018. While still below the 7% figure that is needed to continue reducing poverty rates, this is a step in the right direction for an economy that has taken more than its fair share of knocks over the past few years.

One of the largest economic issues facing Zambia right now is the fiscal issues that have come about as a result of the fall in mining-related exports. After a decade of strength, the kwacha dropped by 50% against the USD in 2015, making it Africa’s worst-performing currency. The corresponding higher price of imported goods led to rising inflation, and despite government efforts Zambia saw inflation rise from 7.9% in 2014 to 21% in 2015 and 19% in 2016. At its peak in February 2016, Zambia saw inflation reach 22.9%, leading to international concerns about the stability of the nation’s economic program. In an attempt to curtail inflation, the Bank of Zambia raised the policy rate from 12.5% to 15.5% in 2015. This bit of monetary policy has been largely successful in accomplishing the central bank’s primary goal of cutting the inflation rate to single digits and lowering the prices of essential consumer items such as food and vehicles, but the higher policy rate has raised borrowing costs, limiting the access to credit needed for investment and growth. Well aware of the challenging balancing act it must undertake, the Bank of Zambia announced in late February 2017 that the policy rate would decrease from 15.5% to 14%, citing the fact that inflation has further slowed from 7.5 to 7% as of January 2017. The hope is that this increases the flow of credit in the economy.

Zambia is also dealing with increased fiscal deficits that came about due to its contracting economy. High levels of public investment combined with flagging revenues have pushed spending well above the level that revenues can support, leading to concerns about the health of the nation’s accounts balance. Since 2010, Zambia’s public expenditures have increased at an average of 13.8% yearly, reaching 28.1% of GDP in 2015. In tandem, fiscal deficits have risen from 1.8% of GDP in 2011 to 5.5% of GDP in 2014 and 9.4% of GDP in 2015. The deficit remained at about 10% of GDP in 2016, but the Zambian government proposed measures to close the deficit late in the year, and has stated that it hopes to reduce the gap to 7% of GDP in 2017. This comes in the midst of growing international concern about the country’s economic system; investors and global financial organizations have criticized the Zambian government for not making the necessary expenditure adjustments quickly enough when revenues failed to meet expectations.

In an effort to alleviate investor concerns, Zambia’s ZMK64.5 billion 2017 budget should bring strong fiscal consolidation policies and monetary reforms aimed at balancing the nation’s budget sheet. The budget calls for domestic borrowing to be limited to 2% of GDP and increase revenue to 18% of GDP. At the same time Zambian government officials recognize that the country still has significant social expenditure needs, so the 2017 budget eschews the austerity programs that some international officials were calling for and increases total expenditure from ZMK50.4 billion to ZMK61.4 billion. This includes increases in education spending (ZMK9.1 billion to ZMK10.6 billion), health spending (ZMK4.4 billion to ZMK5.8 billion) and agriculture, which saw the Farmers Input Support Program budget increased by 160%. While public debt remains an issue that the government is dedicated to cutting, the 2017 budget reflects the belief that spending is still required to generate the growth that will alleviate Zambia’s fiscal issues.

These budgetary questions have taken center stage due to the Economic Recovery Program that Zambia has recently launched in order to right its economic ship. Announced by the Minister of Finance in October 2016, the plan has five central pillars: fiscal sustainability, increasing social protection, cutting waste, improving budget credibility, and promoting economic stability by reducing constraints to private sector development. The 2017 budget represents the first steps taken toward this goal, and the Zambian government is in the midst of delivering further reforms that will prevent waste and increase efficiency. One action already taken was the acquisition of a USD50 million line of credit from the African Development Bank to set up an SME lending program. More than 70% of Zambia’s GDP and 88% of all employment in Zambia comes from SMEs, and Zambian officials hope to support over 1,000 SMEs with the program, increasing employment, strengthening infrastructure, and creating a more diverse economy.

Also on the horizon is a potential aid program with the IMF. In late 2016, Zambian government officials held talks with the global monetary organization, which has previously stated that the country’s budget deficit is a concern. The IMF has supported Zambia’s fiscal consolidation efforts and believes that a well-structured aid program could bring new confidence to global markets. Discussions are still ongoing, but Zambian officials have stated that they expect to reach an agreement within the first half of 2017. Further fiscal consolidation would likely be at the core of any IMF deal, as recent debt sustainability studies conducted by the IMF and World Bank have analysts concerned about Zambia’s ability to meet its debt obligations. Of particular concern are Zambia’s Eurobonds, which mature between 2022 and 2077. Zambia is due to pay USD750 million when the first Eurobonds begin to mature in 2022, and its inability to do so would obviously be harmful. Future assistance would probably come in the form of the Extended Credit Facility, which gives access to financing tailored to Zambia’s needs while the IMF sets structural benchmarks to meet these goals.