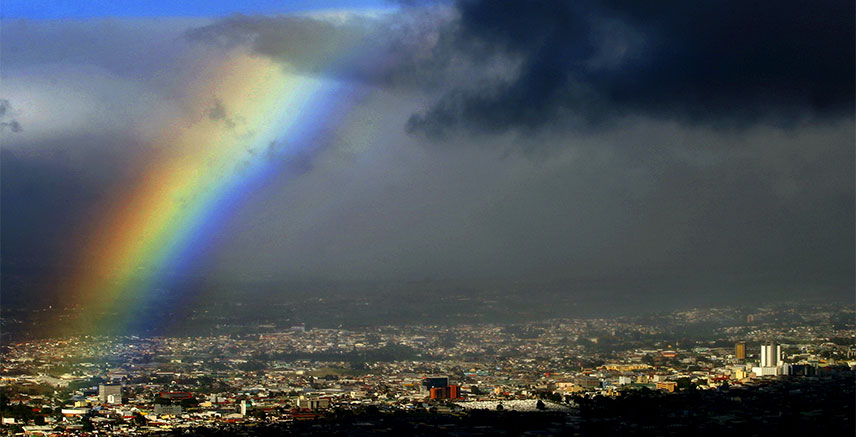 Share on:
Costa Rica, known for its matchless natural beauty and biodiversity, is also Latin America's oldest working democracy and a surprisingly open economy. But the country stands out from its neighbors for other reasons too.

An aerial view of rainbow above San Jose City

Costa Rica was placed in the 62nd position in the World Bank’s Doing Business 2017 survey. This was the best position attained by any Central American nation, right ahead of Panama which ranked at number 70.

Interestingly, the World Bank praised the ease to get electricity credit for companies in Costa Rica, ranking it as the seventh most flexible country in the world in this regard.

But apart from these two positive factors, Costa Rica still has a lot of work to do in order to expand the rules that protect minority investors, and also needs to reduce the amount of paperwork required for starting a business.

2. It has the highest proportion of high-tech exports in Latin America

Costa Rica is an export hub for high technology products. In 2015, its foreign sales of high-tech goods represented 16.8% of all its manufactured exports.

This is the highest percentage recorded in Latin America.

For instance, Mexico’s high-tech exports stand at 14% of the total, while Brazil’s reached 12%.

But this figure was even larger for Costa Rica just a few years ago. From 2010 to 2014, high-tech foreign sales accounted for 35-44% of the manufactured export basket, a proportionally higher than even China, a country famed for its technology production capacity.

At a first glance, the sharp decline between 2014 and 2015 can be attributed to a large extent to a global economic slowdown in that period, but Costa Rica has remained in pole position in Latin America.

3. Costa Rica has the most FTAs in the region

With 13 FTA now signed, Costa Rica now has the most such agreements out of all the nations in the region, according to information extracted from the Organization of American States.

As a result, the country scored 84.7 points in the free trade section of the Index of Economic Freedom published by the Heritage Foundation think tank.

This result is higher than Panama and the other Central American countries, making Costa Rica the most open economy in the region.

As for FTAs, Costa Rica is followed by Panama and Honduras with ten agreements already signed by each country, and next by Guatemala and El Salvador with eight each.

4. Costa Rica is the most visited country in Central America

With a large influx of US tourists arriving every year, Costa Rica is the most visited Central American nation.

According to World Bank data, Costa Rica received a record 2.6 million tourists in 2016, about 500,000 more than Panama in second place.

Nearly 1 million US citizens arrive each year to Costa Rica to enjoy its unparalleled natural beauty.

Additionally, Costa Rica’s sunny coasts on the Caribbean and Pacific are home to around 50,000 US nationals, the vast majority of which are retirees.

Tourism is one of the main drivers of its diverse economy. Continuous political stability and world-renowned biodiversity have turned it into the region’s tourism engine.

Panama remains the main target for FDI to Central America, accounting for nearly half of the total.

But Costa Rica comes second, attracting around a quarter of all the foreign investment in the region.

In recent years, investor interest in the Costa Rican economy has grown exponentially, with FDI increasing threefold from 2009 to 2015, the most recent year recorded in World Bank data.