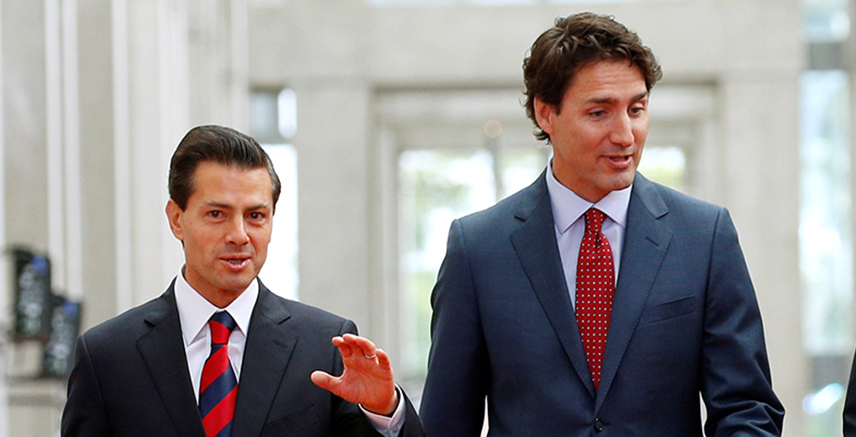 Share on:
From Alaska to Chiapas, the NAFTA agreement is still in force. But all this is set to change next week when renegotiation talks get underway.

Over the months leading up to the election of US President Trump, the Republican candidate committed firmly to ending the North American Free Trade Agreement (NAFTA). He blamed this free trade agreement for the loss of millions of jobs in the US manufacturing sector.

However, a renegotiation of the agreement seems set for August 16, when the three signatory countries will attempt to smooth over or resolve a number of difficult issues that have arisen over the past 23 years.

According article 401 of the current agreement, every product manufactured in North America needs a certain percentage of its components to come from Mexico, Canada, or the US.

This rule varies from product to product. For instance, at least 62.5% of the parts of any vehicle must originate in one of the three member states if it is to be traded tariff-free.

Trump wants to raise that threshold and thus strengthen these rules of origin, as he believes that this will ensure more of these pieces are manufactured in the US.

But Mexico claims that tougher rules of origin could affect the integration of its manufacturing capacity in global value chains.

Agriculture is another point of contention, as many of its subsectors demand some level of protection from their governments, which affects producers in the other signatory nations.

Such controversies have been noted in many of the segments which the sector comprises.

In the sugar industry, for example, US sugar refiners complained that Mexico was implementing certain protectionist practices that could lead to the dumping of sugar refined in the US. Mexico agreed to stop shipping sugar to the US in June.

Another example is the dairy sector. Mexican farmers complain that it is virtually impossible to compete against the US’s heavily subsidized sector.

One of the most trumpeted promises of President Trump has been his USD1 trillion infrastructure proposal, an attractive public investment program that he wants to push for the benefit of US companies.

That policy is part of the executive order to “Buy American, Hire American,” a slogan that the US team is likely to use at the negotiating table when reviewing the rules that allow Canadian and Mexican firms to bid on public projects in the US.

This is expected to be an extremely difficult topic to address. The Canadian government has actually been very clear that it wants its companies to have more access to public construction projects, which will clash directly with Trump’s interests.

One of the list of goals for Justin Trudeau’s government is to encourage labor mobility.

The economies of the US and Canada are very much integrated and to a large extent are very similar.

For this reason the latter would like to improve the 1994 labor mobility provisions which featured in the first version of NAFTA.

However, thousands of undocumented Mexican immigrants live in the US, and many more still cross the Rio Grande illegally each year.

Trump has become famous for his anti-immigration rhetoric, making it unlikely the US administration will concede much in this area.

5. Will there be new tariffs?

And will the new NAFTA levy tariffs that did not exist before?

The US placed a 20% tax on Canadian lumber in June, accusing its northern neighbor of dumping the product on the market.

The two countries have had long been at odds over this issue, namely over Canada’s domestic subsidies for the crucial commodity.

The US decision to impose a new tax is evidence of underlying divergences of opinion among the member states, and has set a hostile tone for next week’s negotiations